How the Latest 'Insidious' Prequel Could Inform More Sequels

Without closure, the ghosts of the past become the ghosts of the present. That's the driving force behind Insidious: The Last Key, out now in theaters. Though this is the fourth movie in the popular horror franchise, it functions as a prequel, giving our psychic heroine, Elise Rainier, the backstory she deserves. As far as seat-gripping horror, some viewers might leave feeling underwhelmed, but the movie makes up for its shortcomings with intriguing world-building and a new character who could have lasting impact.

Directed by Adam Robitel (The Taking of Deborah Logan) and written by Insidious co-creator Leigh Whannell, The Last Key picks up immediately before the events of the first entry. It's taken almost eight years for the saga to finally center on Elise because the creators never started with a master plan; in fact, most of what's come after the first movie has been reverse-engineered. "Each one has been glued to the end of the last one in this complicated Tetris lineage," Whannell explained to the website Den of Geek recently. "You are operating within a box. You have a certain set of characters. You have audience expectations. Those audience expectations are the borders of your creative space. To find the areas of creativity within the lines of that box is where the difficulty lies."

Viewers find Elise (the inimitable Lin Shaye) returning to her childhood home in Five Keys, New Mexico, ostensibly to solve the current tenant's haunting. Between scenes from the present and 1953, we learn how Elise discovered her gifts and how they led to her intense agoraphobia and reluctance in the third movie. "I always thought Elise was an only child, and she spent a lot of time by herself, which then allowed these visitations that came to her," Shaye told Vulture in a recent interview. "But as we all know, Leigh built a very different background, which I think ended up being a whole lot stronger, because to see who she becomes later -- which is this very positive, strong woman -- it kind of shows that you can have terrible beginnings and still pull yourself out to become a good person. The story itself is really poignant and I think has a really nice message." 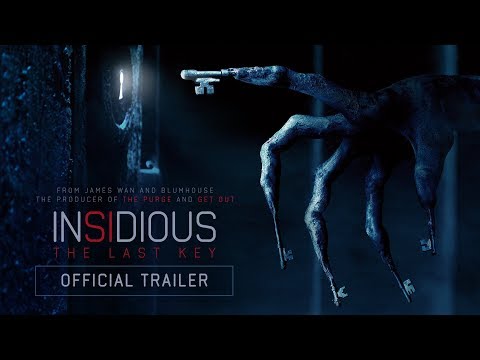 It does, and it makes you appreciate Elise's heroics more -- you'll understand the adversity she's had to overcome and the sacrifice she's making every time she undertakes a job. In New Mexico, Elise grows up the older sister of a boy terrified of ghosts he can't see and the mischievous daughter of a strict prison warden father. By the time she's grade-school age, she's communing with spirits and opening doors that should be left closed. Things are rough for the always-in-trouble Elise from the get-go, but they get worse when she accidentally acts as a conduit for KeyFace, a sinister spirit that facilitates the death of her mother. As Elise's father sees it, Elise's phony "gifts" are a pox on their house. For Elise, from an early age, her gifts become a source of great trauma. These are her terrible beginnings, and, with the help of her trusty sidekicks, Specs and Tucker, she seeks redemption in the present by confronting the demons of her past.

For much of the movie, Robitel tries to capitalize on the spooky things that scared you as a kid: dark closets and basements, antiques, creaky floorboards, doors that move by themselves. The tactics are true to the atmosphere of what makes an Insidious movie an Insidious movie, but unfortunately, much of the ghost-hunting jumps that ensue feel predictable and too familiar. Long-time Insidious fans will feel like they've already seen the ghosts-lurking-behind-people's-shoulders trick, some might cringe at the forced romantic subplots given to Specs and Tucker (now comic relief on steroids), and it'll be hard not to ask, "What? Why?" amid the tortuous stretch it takes to bring KeyFace front and center for what is ultimately a brief, unfulfilling showdown. The saving graces of the movie are undoubtedly Shaye, as strong as ever as Elise -- her fright is convincing and so is her conviction, even when delivering potentially cheesy lines like, "I don’t have memories from this place, I have scars" -- and that dark realm "The Further," where some of this movie's best low-key magic happens.

When Elise finally leaves her body, we're reminded, like in the second installment, that The Further is a realm in which time doesn't operate the way we think it does. She opens a door on a red-caped little boy climbing a ladder in his attic, a reveal that predicts and links the events of this movie directly to the first. The shout-out gets a nice exclamation point at the very end, when Elise wakes up to a call from Lorraine Lambert. Elise finishes her former client's sentence for her -- she knows Dalton's in trouble, already having seen the Lipstick-Face Demon. With the chronological loop of the saga tied in a nice bow, you might think that this is it for the saga. (Recall: Our heroine Elise technically dies at the end of the first, or next, movie.) But what's nice about the way The Further is used in The Last Key is that it actually leaves another story door slightly ajar.

If you go back to the end of the second Insidious movie, you'll see Specs and Tucker answering a house call. Unbeknownst to them, Elise's spirit is there, too, by their side. As far as chronology is concerned, this is where a true sequel could pick up. (We know that just because Elise is dead, that doesn't mean her spirit is ineffective in The Further. It just means that, as shown in the second movie, she'll need the help of another astral traveler who has a foot in the real world.) The gift Whannell gave the franchise the first go-around was Lin Shaye as Elise; she was the engine that kept the stories going. In The Last Key, that's Imogen Rainier (Caitlin Gerard), Elise's estranged niece who also has the gift of astral traveling. Near the end of the movie, we see her tap into her abilities to go to The Further and help defeat KeyFace. Like her aunt, she's a compelling character and another heroine-in-the-making. Should Specs and Tucker need help down the line, they now have options: Elise? Imogen? Both? Does this mean we're getting another Insidious movie?

For what it's worth, Shaye has said that she'd follow Whannell anywhere, including down a path to another Insidious. But the greenlight of a sequel depends on box-office success, which studio execs will read as a general audience's interest in seeing more of a franchise, and the necessity for another story. "I know that [Whannell] has ideas on where he would like to go" with a sequel, Robitel toldHollywood Life recently, but "you always have to work harder with sequels, and it really needs a reason to exist."

That is to say, there would need to be more of a reason for Imogen to take over this franchise or to team up with Elise other than, It would be cool!! "If you think about a TV show, it's not the plot of the show people return for," Whannell told Den of Geek. "It's the characters. You want to know what Tony Soprano is up to. Films don't seem to do as good a job these days as television in terms of those really deep characters." The good news is that while The Last Key might be underwhelming in terms of frights, its intentions are in the right place. It offers plenty to marvel about regarding the mythology of The Further, its characters, and what a second psychic Rainier could mean for the future of the franchise.