Netflix's 'It's Bruno!' Is a Short and Sweet Series About Obsessive Dog Ownership

While there are plenty of canine sidekicks or minor "characters" in television, hardly any shows make the premise of owning a dog central to its plot. Netflix's new series It's Bruno! offers a much-needed, delightfully wacky, take on the subject in manageable episodes. It revolves around the relationship between Bruno, a bug-eyed shelter dog of mysterious origin, and his devoted owner Malcolm, a no-nonsense, born-and-bred Brooklynite played by series creator, writer, executive producer, and director Solvan "Slick" Naim. Together, Bruno and Malcolm navigate their neighborhood's action and obstacles with all the seriousness and consequence of an HBO drama. Each episode concerns a new adventure.

In the series opener, Malcolm is on a journey to find Bruno's favorite brand of sliced turkey after his go-to bodega stops carrying it. In another episode, Malcolm finds that a rogue dog owner is bombarding the neighborhood with uncurbed dog poops, a real-life growing complaint in various parts of the city. When Malcolm discovers the offender, it's a recently transplanted, gentrifying hipster. "Yeah, this is where Spike Lee filmed all those movies," the greyhound owner says shortly before Malcolm confronts him. Unafraid of confrontation, particularly when it comes to protecting the order of his Bruno-centric world, Malcolm attempts to set the man straight only to watch the hipster run away at an almost superhuman speed. 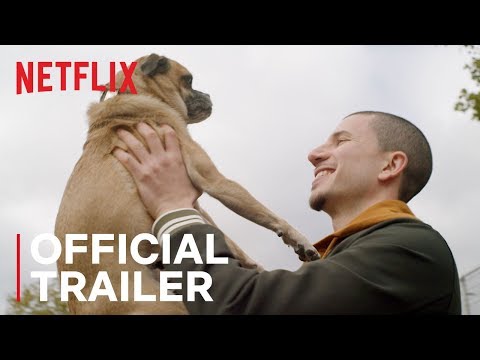 The show's comedy stems mainly from its outsized focus on and exaggeration of dog owner culture. Malcolm takes Bruno, and caring for him, very seriously and everyone else in his world seems to share that point of view. His local pet store is just as central to his community as the nearby bodega or the park. In one storyline, he is thoroughly humiliated when Bruno becomes the face of the pet store's brand of pills for dogs that eat their own poop. Nearly everyone Malcolm associates with, including a woman who dates men only to steal their dogs, centers their lives around canines. This is particularly true of Malcolm's neighborhood rival Harvey (Rob Morgan), whose dog is, for a time, better-trained and more locally beloved than Bruno. Their brief interactions are some of the series' funniest.

Despite being the catalyst for all of the show's action and plot points, little Bruno remains endearingly, well, a dog. He doesn't talk, as the dog at the center of Wilfred, an Australian show with an American remake starring Elijah Wood that also takes an off-kilter look at the relationship between a man and his dog. And unlike the king of dogs on television, Lassie, Bruno never has to go above and beyond reasonable expectations for a pet in a matter of life or death. The most humanized Bruno gets is in quick cuts to his silent reactions to dialogue. And, of course, in Malcolm's ever admiring eyes.

Otherwise, Bruno's unobtrusive dogness only enhances the show's strangely relatable absurdist premises. In one scene, Malcolm yells at a neighbor for petting Bruno without permission. He tries to demonstrate the slight by petting the neighbor's granddaughter on the head. It's an outsized response, but one that speaks to the deep, illogical love most people truly have for their dogs. Whereas many of us treat our dogs like our children, Malcolm fiercely wears that devotion on his sleeve. At one point, I laughed at the shot of Malcolm's apartment walls covered with three portraits of Bruno, only to remember I was sitting beneath a similar portrait of my own dog in my own home. Dog owners are absolutely obsessed, the show acknowledges, but it also seems to suggest that that obsession nurtures the best in us. An otherwise wholesome show, Malcolm plunges into a life of risky drug use and mindless partying when Bruno is kidnapped, briefly ruining his life. When Bruno returns, Malcolm is back to his healthy, if mildly grouchy, self.

Like fellow Netflix show, the UK-produced Chewing Gum, It's Bruno! paints its urban setting with addictive sunshine and playfulness. The colors of Malcolm's neighborhood pop on screen with the stimulating contrast of a children's show. But, comprised of eight episodes at about 15 minutes long each, the series' brevity is key to its charm. While Malcolm makes for an exciting central character, the series forgoes wider character development for exploring the possibilities of its absurdist storylines. And much like when I approach someone walking a cute dog, I have little desire to learn more about Malcolm's world beyond Bruno. It's a focus the show's creators seems to recognize, as both of Malcolm's potentially character-expanding romantic story lines are cut short. And despite chuckling my way through each episode, and the finale ending with a mildly interesting cliffhanger, I didn't find myself yearning for more.

As a whole, It's Bruno! is short, uncomplicated, and sweet. As the complaints over the finale of TV behemoth Game of Thrones highlighted, there's nothing more tiresome than a show that lasts longer than it needs to. This tenet goes double for shows with comedy, like Orange Is the New Black, which is mercifully ending this year. In an era replete with unending series with deep and involved story lines, there's something to be said for an easily enjoyable snack of a show like It's Bruno! Should it come back for a second season, there's still more to mine from the show's central premise. But even without a follow-up, this short premiere season is a surprisingly charming gem.

Ann-Derrick Gaillot is a contributor to Thrillist.
Our Newsletter