Netflix's Disaster Anime 'Japan Sinks: 2020' Is the Perfect Metaphor for This Bad Year

Some might feel that a harrowing and hellish vision of the apocalypse in entertainment might be more than they can bear right now -- and that’s perfectly understandable. But Pyeon-Gang Ho and Masaaki Yuasa’s Japan Sinks 2020, the latest anime miniseries from Science Saru, is more than worth gritting your teeth and sticking through. This is Yuasa’s third project of this year, following the likes of Keep Your Hands off Eizouken!! (probably the best anime of the year so far), about three high school girls who want to make anime, and the melancholy seaside rom-com Ride Your Wave (one of our favorite underrated movies of the year). Japan Sinks 2020, which recently premiered on Neflix, comes as something of a shock to the system, both for fans of Yuasa’s work or those who end up watching out of curiosity.

With Science Saru, the studio Yuasa co-founded with its current head Eunyoung Choi (a frequent producer of his works), Yuasa has shown great versatility through his freeform style comprised of flat imagery and flexible bodies, applying his cartoonish, forced-perspective sensibilities to a variety of wildly creative material, like 2010 time-loop series The Tatami Galaxy and its spiritual sequel Night is Short, 2017's Walk On Girl, and 2014's dynamically innovative sports anime Ping-Pong: The Animation. Based on the '70s disaster novel by Japanese writer Sakyo Komatsu, Japan Sinks 2020 feels like the polar opposite to the sunnier disposition and breezy, loopy humor that typically accompanies Yuasa's animation -- Eizouken in particular being a plainly joyous ode to its own medium and the animators behind it. If anything, the closest point of comparison might be the other Saru/Netflix project Devilman Crybaby, a cathartically anguished, apocalyptic fantasy drama that went to untold lengths of misery and violence in its tale of angels, demons, and homoerotic love. But it feels all-too-appropriate that Japan Sinks, a consequential and heartwrenching series rooted in hard goodbyes and new beginnings, is Yuasa's final project with Science Saru before he retires from the studio. 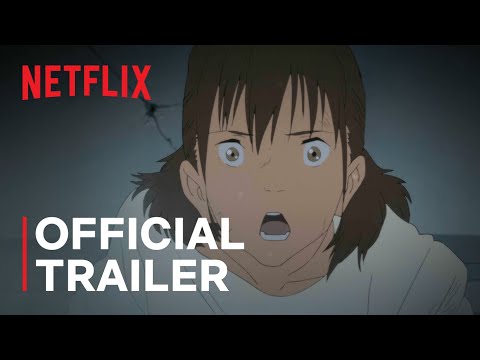 Though the basic concept -- that Japan is indeed sinking -- is the same as the novel, 2020 sets itself apart from previous adaptations by focusing in on people without professional responsibility to confront or solve the crisis. It follows the Mutō family, fleeing across the country to survive the chain reaction of disasters that led Japan to start sinking. The oldest child, Ayumu, appears first before disaster strikes, out in a stadium preparing for the Tokyo Olympics (which, between this and Akira, is a straight-up bad omen in anime at this point).

The initial moment of disaster is utterly terrifying, in its suddenness and in its mercilessness, cutting between the members of the family as they all experience extremely traumatic events. The first episode follows this shock and panic, isolating each member of the family from each other as they all try to head home. Eventually, Ayumu, her mother Mari, father Kōichirō, and younger brother Gō are reunited, and the show focuses on their desperate cross-country trip for survival, and the immense losses they suffer along the way. The lovely opening score from Ryuchi Sakamoto and singer Taeko Onuki sets the tone for much of the show and its soundtrack, with sparse and minimalist notes from composer Kensuke Ushio, whose work here recalls his compositions from A Silent Voice and Devilman Crybaby.

It’s fascinating to see Yuasa’s intentionally wonky linework mixed with a more realistic backdrop and more subdued, painfully prescient material. This time around, the characters are very much human bodies, full of limits; Naoya Wada's character designs are drawn with more lines and more detail than is usual for Saru. Faces express and contort with meticulous detail, and bodies are animated with more realistic and limited movement rather than the flexible cartoons of the likes of The Tatami Galaxy. These are much more fragile people, more likely to break than they are to bend, and break they do -- crushed by debris, dropped by poison gas, and worse. The show is almost impressively macabre at times, with its visions of nature’s cruel and indifferent response to human suffering -- birds and dogs (and at one point a shark!) picking apart familiar corpses.

While it mostly leaves behind the surrealist and freeform style that characterizes a lot of Yuasa’s other work, Japan Sinks 2020 maintains some of his visual tics -- Yuasa’s penchant for dramatic forced perspectives and expressionist imagery are still very much present. Occasionally, Gō’s imagination sweeps the show into a different art style as he pictures himself within a survival video game, but the moments are brief. That more subdued style might be disappointing to longtime fans of his work, but it’s hard to imagine this show any other way. There’s brief solace to be found in the painted colors of sunsets, as well as the gentle shading of the landscapes and the characters faces. The proportion of destruction is practically Biblical, as the Earth opens beneath people’s feet and swallows them up. It’s a sobering vision of the planet as something simultaneously powerful and fragile, years of unnoticeable, incremental change that brings disaster, something that most everyone watching will be keenly aware of.

These moments of respite keep it clear what’s at stake throughout the series as well as keeping pure nihilism at bay. Japan Sinks makes no pretense that everyone is honorable (the Mutōs run into their fair share of awful, predatory people) but isn’t so misanthropic to deny the existence of kind, selfless people as well. Yuasa and co. are keenly aware that without this the show would be unbearably sad.

One such standout character is Kaito, who must be the most miraculous and likeable YouTuber that will ever exist -- charming, generous, whipsmart, and even-keeled amidst the apocalyptic chaos. He’s also one gateway into the show’s most unique element as an adaptation: its interrogation of social media as a response to disaster. Characters essentially live tweet the apocalypse and use the internet to learn what’s happening, contact friends, get advice. That element is mostly explored through Gō, an extremely online boy with dreams of moving to Estonia who notably incorporates a lot of English into his speech, something which later angers an older, more nationalist Japanese man they run into along the road (it’s also important to know that the Mutōs are a mixed race family, and this causes them some problems as racial purity is prioritized in one or two evacuation attempts).

The series can often move at a relentless pace that doesn’t allow its themes and character arcs to breathe, though there are a handful of episodes that take time to slow down and decompress -- especially towards its end, which prove to be the most affecting episodes of Japan Sinks. It’s not ambivalent to this quality though, making sure to address that the family has barely had a minute to process their grief, sorrow bubbling to the surface the moment that they stand still. When it does, the show’s emotional arcs truly get to shine -- particularly Ayumu's increasing survivor’s guilt as the death toll of their party rises.

Yuasa posits that such catastrophe won’t necessarily be the end (perhaps in this regard, it could be viewed alongside the similarly optimistic Weathering With You amid environmental catastrophe). By the end, the show's critique of Japanese nationalism as the real doom of Japan is crystal clear -- the archaic desire for isolationism and purity not only meaning death in the short term, but in the long term too. The series posits that without connection there is no memory, and without memory, death is truly the end. A lot of that memory is enabled through digital technology, which here mostly exists as a way of personal connection, remembrance, photos and videos becoming loaded with meaning and history. Especially in a time where a lot of people are barely holding together through the usage of such digital communication, Japan Sinks truly hits home.

Kambole Campbell is a contributor to Thrillist, on Twitter @kambolecampbell.