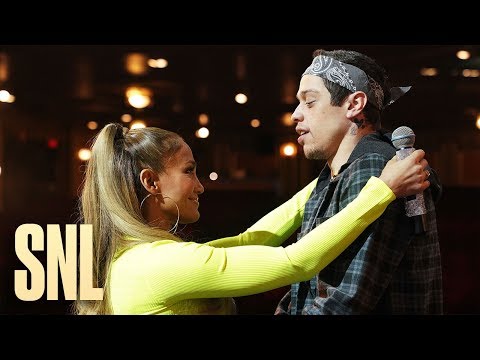 Jennifer Lopez may be happily engaged to former New York Yankee Alex Rodriguez, but even she is vulnerable to the indescribable charms of a certain semi-mute bro: Chad. Pete Davidson's classic Saturday Night Live character showed up for a sketch with host J-Lo, who plays herself as just one diva who finds herself attracted to a seemingly clueless roadie. As she pours out her feelings to Chad following a rehearsal with her band, J-Lo finds her vulnerability met with Chad's signature "OK" and open-mouthed stare.

That doesn't sway Lopez, who's convinced Chad does things like fall off the stage just to make her laugh. As the two begin to slow dance, though, A-Rod himself makes an appearance and catches the fireworks exploding. He throws down the bouquet of roses he brought and stalks off, with Jenny from the Block chasing after him. It's the kind of star cameo you'd expect when one of the world's biggest stars hosts SNL, even though a guy like Chad may have no appreciation for who A-Rod and "Jello" (as he calls her) really are.