'Jeopardy! The Greatest of All Time' Was TV's First Must-Watch Since 'Game of Thrones'

We're right in the middle of a massive paradigm shift in television: how shows are produced, what kinds of stories are told, how swiftly online streaming has surpassed the staid comforts of network TV. When HBO's barnburner Game of Thrones, which felt equally familiar and like something totally new, ended in 2019, we all tumbled over ourselves trying to predict what "the next Game of Thrones" would be, or if there would even be one. With apologies to near contenders like HBO's Watchmen, Disney+'s The Mandalorian, and Netflix's The Witcher -- bangers all -- the first must-watch network television event since Jon Snow murdered Daenerys is... the primetime version of a show that's been on for nearly 40 years.

Even though it's just three dudes standing in a row answering incredibly difficult trivia questions, the four-day Jeopardy! The Greatest of All Time tournament was the perfect TV event -- so perfect that, by the final match, I was hoping super-brain Ken Jennings wouldn't win just so that the competition could go on a little longer. (You can re-live the entire thing over and over on Hulu now.) The series pitted the syndicated game show's legendary Jennings, whose original 2004 run of 74 consecutive victories is still the longest Jeopardy! winning streak ever and who is the second-highest-earning champion in the game's history; Brad Rutter, the highest-earning American game show contestant ever and the highest-earning Jeopardy! player (he'd never lost a match to a human before this tournament, losing only to IBM's whiz Watson); and 2019 sensation James Holzhauer, whose unorthodox playing style made him the show's third-highest-earning contestant ever and holder of its top 16 earning records. 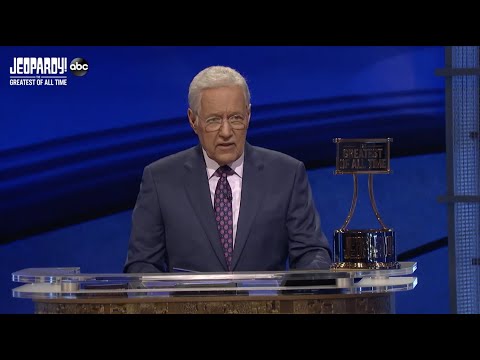 That's a lot to take in, and so was the actual tournament, which took place over four nights, starting January 7, with the first person to get to three wins taking home the whole thing, the whole thing being one million dollars and a cool trophy (instead of dollars during the game, the players competed for points); the two runners-up would both receive $250,000. It was the first time in 30 years that Jeopardy! has aired at primetime -- that's 8 p.m., baby, and for a whole hour, instead of Jeopardy!'s usual half-hour slot. That meant that every episode featured two regular-sized Jeopardy!s for the price of one, each made up of the classic Jeopardy, Double Jeopardy, and Final Jeopardy rounds we're all familiar with, the difficulty of the clues jacked way up. During the first round of the first game, host Alex Trebek announced, with a demure grin, that not one of the contestants had gotten an answer wrong.

There's something about watching a bunch of normal-looking dudes stand at podiums and answer impossible questions correctly that is so exhilarating. It has a lot to do with how comfortable Holzhauer, Jennings, and Rutter clearly are on the Jeopardy! soundstage, each having walked its floors more times than any other contestant. And it was such fun to see all three of them interact -- before this tournament, I'd never seen Jeopardy! contestants touch each other, let alone create little in-jokes and jabs to make the audience crack up. Holzhauer and Jennings were lined up next to each other, and every now and then you'd see Holzhauer clapping his competition on the shoulder every time Jennings tried a risky wager.

They even began groaning in sympathy every time Rutter got a Daily Double -- which just kept happening, poor guy. By the fourth, decisive night, everyone had loosened up a little. When the second game started and each players' point scores were temporarily erased (points from the first game get added to the second to determine the night's overall winner), Rutter's screen said "$0," which happened to also be his total from game one. Holzhauer pointed to Rutter's screen and quipped, "Hey, Brad's score is still on there."

The awkward camaraderie even extended outside the game and onto the Internet, where Holzhauer would not stop tweeting jokes at his competition. Maybe it was strategic, like he was trying to shake them up a little. More likely he was just having fun. That's what made this series so good: for four nights, the show slyly sidestepped its otherwise extremely rigid structure to let a bunch of smart, well-mannered (mostly) guys answer otherwise useless trivia questions. The composers even cooked up a synth-y pepped-up version of the iconic theme and "think music" just for this game. People hosted watch parties at bars, the show trended on Twitter for the four nights it was on, floods of all-caps tweets hit every night around the same time as the poker-faced players revealed their Final Jeopardy answers.

The tournament also came at a time when everyone who follows the show even a little bit knows we're witnessing the last days of Alex Trebek as host, following his announcement last spring that he'd been diagnosed with stage IV pancreatic cancer. It gave these games a bittersweet twinge: it's probably the last time these contestants will set foot on the Jeopardy! stage, and possibly the last time Trebek will host a championship like this. He's been the host of Jeopardy! as long as an entire generation of fans has been alive, and it was clearly on the contestants' minds -- Rutter even skipped answering the Final Jeopardy clue during the last match to write "You're the best, Alex!" on his board. Jeopardy! The GOAT was more exciting and funny than any game show involving a bunch of people yelling trivia at a board ought to be. I'm no professional sports gambler, but I'd wager a lot that it's the last we'll see of its kind for a very long time.