'Orange Is the New Black' Actress by Day, Death-Metal Singer by Night

Maria Ruiz, the Dominican-American inmate who became a major villain in Season 4 of Orange Is the New Black, is tough. But the actress who plays her is not to be trifled with either, at least not on stage: Jessica Pimentel is a death-metal badass. Here's proof. 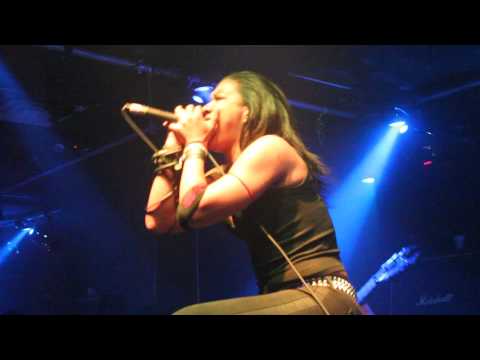 That's the 33-year-old, Brooklyn-reared actress fronting Alekhine's Gun, the band (named after the chess player Alexander Alekhine's signature move) that she sings in when not ordering minions to burn swastikas into fellow inmates' arms on the popular Netflix series. Thankfully, Pimentel is far less fearsome off-camera and offstage, which we learned when she took a break from shooting Orange Is the New Black's fifth season to talk with us about her fascinating musical backstory, juggling her two passions, and that intense "Cookie Monster" metal-singing voice.

You started playing violin at age 3 and later enrolled in New York's High School of Performing Arts. How did you get interested in music so young?

Someone at my mom's office had a baby-sized violin, and she took it home. I started playing with it, and I loved it. It turns out our next-door neighbor was a concert violinist; I guess he was tired of that cat-killing sound I was making, so he taught me the basics.

I took classes at conservatories, played with many orchestras around town, and was playing day and night. Until I was 16, that's what I thought I was going to do. When I was 14, I started shaking out my hands a lot. My hands started to get numb, then tingle, and the pain would go up my arm and I couldn't control how I was playing. It was tendinitis, and I knew at that point I wasn't going to be able to pursue the violin at that level. With surgery, there was a chance I could mess up my hands more. So it was the biggest bummer, because I missed out on so many childhood moments. You think, I could have gone to that sleepover or that ice-skating party, or I could have tried gymnastics or dancing, or I could have slept in on Saturday instead of getting up to play with an orchestra.

So what did you do?

The two options were to pursue another discipline, where you'd have to audition like everyone else at the beginning of the year, or leave the school. I loved the school so much -- being with my friends, being near the Met and Juilliard, and plays and fashion week -- that I decided to go with acting.

But you found another musical path… a metallic one

I had heard Bon Jovi, Def Leppard, and Mötley Crüe on the radio and liked it, but people would say, "Oh, that's sellout stuff. Listen to this!" My friend's older brother handed me King Diamond's Conspiracy [an operatic Danish metal singer whose band Mercyful Fate popularized the use of corpse paint and influenced horror- and demon-centric metal]. That was the heaviest, most intense music I ever heard in my life -- it scared me so much that at the age of 12, I was afraid of demons lurking in my closet. I kept exploring metal: when I found Slayer, I was very afraid, like I've gone too far and really am going to hell.

"When I found Slayer, I was very afraid, like I've gone too far and really am going to hell."

Did your parents have a problem with you listening to metal?

My mom would let me listen to what I want, and she didn't notice that metal could be so scary and deviant. But she didn't like stuff with cursing or about sex. She was not into her 14-year-old daughter listening to very graphic sexual music, like Red Hot Chili Peppers' Blood Sugar Sex Magik. But she got me my first guitar.

So you could play guitar despite your tendinitis?

Yes. The issue was that the space on the violin's neck is so small that it puts pressure on your hand. But when you have a bigger fretboard, like with a guitar or bass, you're using more of your forearm, and it's much easier.

At the time that you started to play with bands in your teens, the blood feuds between hardcore punk and metal fans of the '80s had subsided, and those genres had come together. Were there lots of other Latino kids into hardcore in the New York scene?

The majority of my friends were Latinos in the hardcore scene, and almost every band I loved had a Latino band member or were all-Latino. At one point, white kids were the minority in hardcore.

"I ask that my words be the catalyst of someone's enlightenment. I'm not writing, 'Let's party!'"

You've played in many bands. What makes this one special?

Alekhine's Gun is my favorite band I've ever been in. We started in 2009, and it's very personal -- this is the first time I got to create my own thing in a band. I came up with the name because I'm a dork and I love chess, and I also felt that this music could convey a special message to an audience, and the best way to connect with an audience sometimes is to get down there and look in their eyes. I'm a practicing Buddhist, and so the subject matter of the songs is holy along those lines. I think hard about every word that I'm going to say, and I do visualizations before I write, and I do a special meditation called the Seven Wisdoms where I ask that my words be the catalyst of someone's enlightenment. I'm not writing, "Let's party!"

Have you had any interaction with Maximum Games, which put out a video game with the same name as your band?

The video game has very few followers on social media, and when you search the name, we were the No. 1 thing that would come up, even before Alexander Alekhine. So Maximum approached us and asked if we wanted our music in the video game, but they did not offer us any money, only cross-promotion.

Ah, the old "you should do this for free because this will help you with exposure" bit

We looked at it and said, "Who's exposing who?" So we didn't do it. I didn't appreciate that offer, and I don't hear good reviews of the game. They said, "We can go to video-game conventions and give a free giveaway card for your music." I can give away my songs myself… I don't need you to do that for me.

How did you learn to do the "Cookie Monster" metal vocal style?

I have no idea. It was a natural progression as to what needed to be done. It was at a rehearsal with some band, there was a Cookie Monster part in a song, and someone didn't show up and I tried it. If you commit to it, you can do it, but you can't half-ass it or you'll hurt yourself. Some people inhale, which I can't do [inhales and intones a guttural HUURRRRRRRRR sound]. It's opposite to what your vocal cords are designed to do, and there's no power to it, as opposed to exhaling [exhales a much more earth-quaking OOOOHHH-WHAAAAA]. 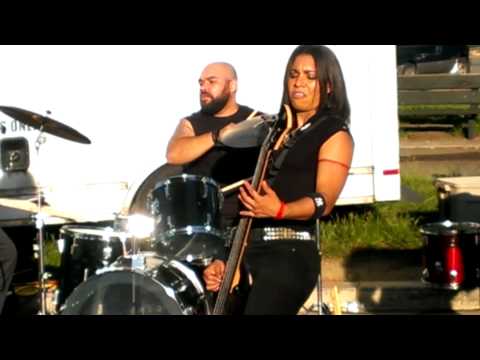 You are the frontwoman of Alekhine's Gun, but the bassist in Desolate. What's the difference between the two roles?

Playing bass is a vacation from singing. It forces me to think in a way that I hadn't before as a first-chair violinist: I always thought of melody and high notes, and playing bass forces me to think rhythmically, about counterpoint and how to support musicians. And Desolate reminds me that music is fun: I can do shots on stage with this band. I don't have to keep the show together, keep the energy up and connect with the audience, or throw up during a set cause I don't have enough air. When I play bass, I can go away into the music.

What are some of your favorite metal bands lately?

I love the whole black-metal scene, like you have to like Mayhem, but there comes a time where I will start to feel sick from the bad energy [the band's bassist murdered its lead guitarist; a third member committed suicide]. Deafheaven’s New Bermuda was my favorite album last year.

Like most working New York actors, you were on a few episodes of Law & Order

I was on all of them -- the main one, Criminal Intent, SVU. You’re not a New York actor until you've been on Law & Order; it's a rite of passage. I played hookers on some of the shows.

Does it bother you to get cast in stereotypical roles, as a Latina actress?

Well, it's a paycheck, and it's a great experience, an acting job on one of the top shows in the world. Hookers exist in the world; I'm not going to deny it. I didn't do anything degrading… on one of the shows, I was a crackhead mom who locked my kid in a cage -- a white actress might be cast for that! There comes a point when you need those roles to break into the business. And there might be a point where you do not need to play a crackhead for the third time. I don't see myself going back to roles like that, unless it's the Oscar-winning crackhead role. On Orange Is the New Black, you get the opportunity to understand who Maria Ruiz is and why she has made certain choices; she's not a one-dimensional character.

How do you balance your Orange work with your band?

The band tries to write, record, rehearse, and play when I'm not shooting. And so I'm locked into Orange Is the New Black for the rest of the year, and I'm very busy this season. Carcass is playing tonight in New York, and I'm like, "Can I go? I really want to." My call time isn't 'til 7:15am tomorrow, but I know that I wouldn't want to leave the show and I'd want to hang out until 2 or 3. So I can't go.

Rob Kemp is an writer and editor who hopes Ms. Pimentel is not so displeased with this interview that she'll command her minions to carve a swastika into his arm.