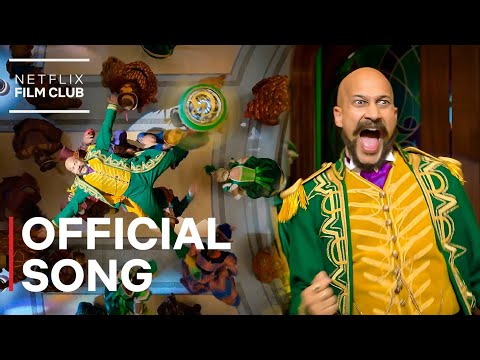 We have to talk about something, and it's the fact that I can't get Keegan-Michael Key's villain song from Netflix's Jingle Jangle: A Christmas Journey out of my head. I didn't expect this to happen to me, but, then again, we never expect these things, do we?

The plot of Jingle Jangle is something like this: In a small, Christmassy town populated by people dressed in costumes Mary Poppins would envy, a genius toymaker named Jeronicus Jangle is betrayed by his apprentice Gustafson, who, encouraged by a sentient wind-up matador doll, steals Jangle's book of inventions and becomes the town's richest and most popular toymaker. Heartbroken and bereft of inspiration, Jangle turns his once-vibrant toy shop into a pawnbroker's, and, years later, only his granddaughter has the imagination to save the family business. After a time-jump, Jangle is played by a soulful, mournful Forest Whitaker, and Gustafson is played by a manic Keegan-Michael Key in an emerald-green cape and top hat.

His is not the only song in the movie: Star Madalen Mills, who plays granddaughter Journey, gets the rousing "Square Root of Possible," and Whitaker himself sings "Make It Work," which is as much about fixing trinkets that are broken as it is about repairing family relationships. The rest of the movie has its charms, but the whole thing peaks with Key's villain song, "Magic Man G," which is like if The Wiz and The Rocky Horror Picture Show met the Onceler from The Lorax and the burlesque book song from Mary Poppins Returns and were like, "Let's collab." The bass line, the breakdown, the dancers going absolutely wild, Key hitting those low growls harder than Beyoncé at Coachella—it's so good. All this for a song about a vaguely defined flying wind-up toy that (spoiler alert) cracks into pieces as soon as the song ends. Maybe Gustafson should have ditched the toy empire idea and gone for a record deal instead.