All the Ways the 'John Wick' Sequel Expanded the Franchise Universe

Warning: This post contains spoilers for the movie John Wick: Chapter 2, and discusses the ending of the movie in detail. Reader discretion is advised.

Despite the propensity for chaotic violence, there are rules in the Wick-verse. While the film series kicked off with 2014's John Wick, a stylish gun-fu headshot of a revenge thriller starring weary action movie lifer Keanu Reeves, the second entry in the saga is a more advanced study in Wick-ology. John Wick was the introductory course; John Wick: Chapter 2 is the masterclass. Consult Wick-ipedia accordingly.

What makes the sequel so impressive? The clear understanding by the creators that what fans affectionately refer to as "world-building" is also just smart storytelling. Besides the hand-to-hand-combat, the dry wit, the emotional appeal to dog lovers, part of what made the first John Wick such an effective -- and unique -- crime film was the fetishization of underworld etiquette: the code shared by hired killers, the fancy Continental Hotel where assassins stay, and the sense that every character stepped out of a GQ photo shoot.

All those things are back this time -- and often more convoluted and slyly surreal than ever-- so let's count the ways the Wick-verse is growing. 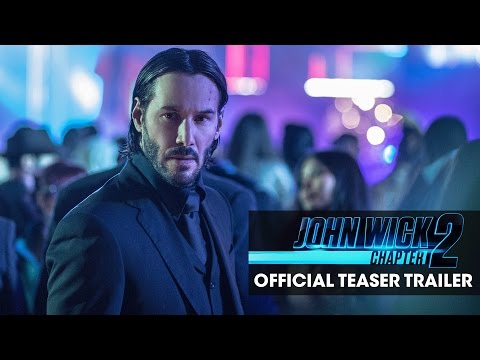 The use of "markers"

After opening with a kinetic, often hilarious slapstick action scene involving Wick's beloved Mustang, John Wick: Chapter 2 quickly establishes its noir bona fides by having our Zen hero accept a mission because of a "marker" that he owes to someone. That debt belongs to Santino D'Antonio (played by Riccardo Scamarcio), the Italian gangster who'd helped Wick leave behind a life of crime in favor of marital bliss. (Wick's wife, Helen, died of an unspecified illness prior to the events of the first movie.) What mission does Wick get sent on? He must head to Rome and kill D'Antonio's sister -- and, if he refuses, he'll be killed.

The idea of a "marker" as a way to keep track of a debt is a staple of crime fiction, mafia sagas, and hitman movies. It just sounds cool and mysterious, conjuring an idea of an elaborate hidden shadow economy based around fancy IOU notes passed between disreputable men and women. Like any moral system shared between killers -- whether it's in Westerns or Samurai films -- the "marker" is a codified custom of a lawless world, a way to create order amidst a seemingly anarchic system. And, of course, it's meant to be broken.

The fun of John Wick: Chapter 2 is in watching the filmmakers find new ways to provide clever twists on old tropes. The movie's writer Derek Kolstad, who also penned the script for the first film, originally introduced the concept of the "marker" as a way to simplify the story's plot. "It was like a favor," explained director Chad Stahelski in an interview with SlashFilm. "It’s a bond, it’s a check you write with your life. It was taken in a different way. [Kolstad] wanted to use it in a different way, and we’re like, we love that idea, there’s something mythical that it’s a talisman. There’s something cool about that. You trade your life for a favor."

The first John Wick was a relatively land-locked affair. While modern action heroes like Matt Damon's Jason Bourne, Liam Neeson's Taken character, and the Fast and Furious crew often globe-trot their way through border-crossing plotlines, the first Wick stuck to New York. We saw Wick's home, the hotel, a night club, and the Little Russia that the movie's villains called home. There were no vacations.

John Wick: Chapter 2 expands the map by taking Keanu to Italy, where we get a sense of how far the power of the High Table, the mysterious organization of killers who run the world, really stretches. In the grand scheme of things, Wick is only a pawn in a much larger game of 12 Dimensional Chess being played behind the scenes. Unlike Neo in The Matrix, who explicitly wants to bring down the conspiracy surrounding him, Wick is more of a foot soldier. He's just looking for some peace and quiet. Maybe a nice dog park near his house.

When Wick arrives in Rome, he looks good. (Really, the 52-year-old Reeves always looks good.) But, knowing that he has an important assassination to carry out, he makes an appointment with a sommelier (Peter Serafinowicz) who provides him a range of automatic rifles, handguns, and knives. The elegantly edited sequence intercuts a trip to a tailor who makes bulletproof suits with images of Wick choosing his weapons. He makes each choice with the studied precision of a foodie perusing a tasting menu.

The scene between Wick and his sommelier really encapsulates the appeal of this series: it's absurd but Reeves completely commits to the comic conceit. There's no Chris Pratt-style winking at the camera. This is an action movie that understands details of the world can be strange -- even goofy -- without having the characters constantly call attention to them in a meta, self-referential, or ironic manner. It trusts the audience to get the joke.

The enduring power of gold coins

As we know from the first film, the world of John Wick relies on cool-looking gold coins for pretty much everything. It's great. The secret lesson of John Wick is very similar to underpinning philosophy of Super Mario World: coins rule everything around me. I can't put it any better than this tweet:

The secret network of homeless people

In addition to bringing back characters from the first movie played by Ian McShane, Lance Reddick, and John  Leguizamo, John Wick: Chapter 2 also introduces a mute assassin played by Ruby Rose and a bald one played by Common. But, really, the best addition to the cast is Laurence Fishburne, who re-teams with his Matrix cast member Reeves to play a character called "the Bowery King." Yes, you read that right: Laurence Fishburne is the Bowery King.

What exactly does the Bowery King do? Well, he loves hanging out on his roof and feeding pigeons. Much like the Central Park Pigeon Lady from another classic NYC sequel, Home Alone 2, the Bowery King likes to provide nourishment to winged creatures while dispensing wisdom. Also, he has a vast, city-wide network of homeless assassins that he can mobilize at any given moment. There's a scene where Reeves is injured and running though a subway station. He stops and gives one of his precious gold goins to a beggar and suddenly the vagrant transforms into an icy killer out of a John Woo movie. It is as ridiculous -- and great -- as it sounds.

No exception: the rules matter

In the first John Wick, Ian McShane's tight-lipped Winston, the proprietor of the Continental Hotel, was a bemused observer of the deadly mechanics surrounding him. He was above the fray. He didn't like to get his hands dirty. With his ornate speaking style, the Deadwood actor was perfectly cast as a mysterious and not entirely trustworthy confidant. He oozed menace and class in equal measure.

John Wick: Chapter 2 forces him to put his cards on the table. As the film draws to a close, Wick kills Santino D'Antonio on the grounds of the Continental, breaking the rules of the hotel and getting himself excommunicated from the secret society at the same damn time. We then see Winston put out a High Order mandated hit on Wick through a complicated process involving a team of glasses-wearing, tattooed office-workers. (These ladies need their own spin-off graphic novel or something.) Basically, Winston is forced to turn on Wick. In the Wick-verse, rules are rules.

Before he sends his longtime colleague off to a near certain death, though, Winston delays the hunt for Wick by an hour. How exactly does he do this? By filling an entire park with his own secret network of assassins. As the two say their goodbyes, Winston "freezes" the entire park in what has to qualify as the biggest and most deadly flash mob in the history of Manhattan. The message is clear: don't mess with anyone who was on Deadwood.

The eye on Chapter 3... and beyond

The first John Wick film was a contained affair but John Wick: Chapter 2 has larger, franchise-launching ambitions. The ending, which finds Wick running through the city with his trusty dog as all the world's best assassins attempt to take him out, is clearly designed as a cliffhanger. There's also a brewing secret war that could break out between Fishburne's crew and the gangsters living North of 14th Street. And there's John Wick's new dog, too. The movie has enough unresolved plot-threads to keep speculation going until another sequel arrives.

The filmmakers have been clear about this, discussing possible sequels and even a TV spin-off during their press stops. "The whole purpose of John Wick: Chapter 2 was to get us into John Wick 3 — the bridge, but do an interesting bridge," said Stahelski in an interview with MTV. "All the cool stuff we showed you in 1 and 2 — we call it the service industries [for assassins] -- we wanted to take that away. John Wick was about showing you and giving; John Wick 2 was about taking everything away from him."

Now that everything has been taken away, what's left for our often stabbed, always bearded hero? More bullets, more suits, and more mythology, for sure. But also more John Wick movies. It turns out revenge is a dish best served over and over.

Dan Jackson is a staff writer at Thrillist Entertainment and he will defend The Matrix Reloaded to you in person. He's on Twitter @danielvjackson.