The most striking shot of the Joker in Christopher Nolan's The Dark Knight, a superhero adventure with the brooding tone of a crime saga, arrives in the second half of the film as the clown-faced villain, exhilarated after staging his escape from jail and tricking Batman yet again, sticks his head out a cop car window. As the vehicle races through the streets, the city lights blurring behind him, Heath Ledger shakes his greasy hair in the wind. It's a small, quiet moment -- less flashy than the "pencil trick" scene and less important to the plot than the tense interrogation showdown -- but it lingers as an isolated image, the perfect crystallization of the character's free-wheeling, anarchic nature.

Todd Phillips' Joker, an origin story with the often dreary style of a faux-deep character study, attempts to create a similarly impactful moment late in the movie. After committing a particularly gruesome act of violence, Joaquin Phoenix's physically gaunt, psychologically tormented version of the character triumphantly dances down a large set of concrete steps in Gotham. Dressed in a garish three-piece suit, he throws his limbs wildly, like he has been unburdened in some profound way. On the soundtrack, a familiar song from the 1970s plays: "Rock and Roll Part 2" by the British glam-rock artist Gary Glitter, a convicted pedophile currently serving 16 years in prison for abusing three young girls.

Following the film's premiere at the Venice Film Festival, where it took home the prestigious Golden Lion Award, the use of the song, which will likely result in a significant payday for Glitter, was noted in some reviews. But now that the movie has opened in wide release, collecting over $93 million in the U.S. for a record-breaking weekend, the song selection is under more scrutiny, with the New York Post speculating "'Joker' could make a fortune for pedophile rocker Gary Glitter" and the Daily Beast asking, "Does anyone at the Warner Bros. music department have access to Google?" Here's what you need to know about the latest Joker-adjacent controversy.

Who is Gary Glitter?

Born Paul Francis Gadd, Gary Glitter is a 75-year-old English musician with multiple UK chart hits including "Do You Wanna Touch Me," "I Love You Love Me More," "I'm the Leader of the Gang (I Am)," and "Rock and Roll, Parts 1 and 2," which is featured in Joker. Over his long career, he released seven solo albums, in addition to multiple compilation records and live recordings, but he achieved his greatest mainstream success in the 1970s, when glam-rock, an influential subgenre known for its glitzy sound and outrageous looks, was at its peak in the UK. With his sequined outfits and Elvis-like pompadour, Glitter celebrated rock's kitschy past while pushing it into the future.

Beginning in the late '90s, though, Glitter's name would forever become tied to public scandal. In 1997, he was arrested for possession of child pornography and was eventually sentenced to four months in prison in 1999. After fleeing England and traveling abroad, he eventually settled in Vietnam, where he was arrested in 2006 and sentenced to three years in jail by a Vietnamese court for assaulting two underage girls. Following his release, he returned to England, where he was convicted in 2015 for abusing three girls between 1978 and 1980, and sentenced to 16 years in prison. According to the Daily Beast, his potential release "could come as soon as 2021 under British law." 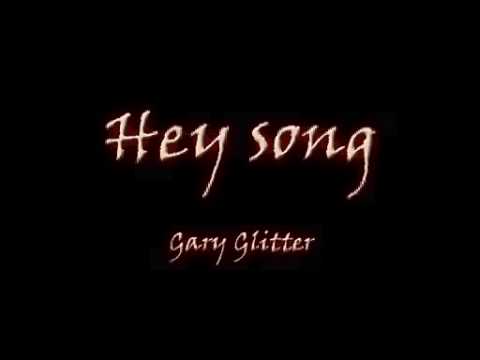 What is the history of "Rock and Roll Part 2"?

Often referred to as "The Hey Song," "Rock and Roll Part 2" is Glitter's most famous hit, particularly in the United States, where it peaked at number seven on the Billboard Hot 100 Chart and went on to become a sporting event staple. Where the first part of the song, "Rock and Roll Part 1" is less well known to most American audiences, the almost wordless instrumental section of "Part 2," with its thumping rhythm and simple guitar part, was ubiquitous in arenas for decades. As noted in a Vicehistory of the track's peculiar second-life, the song was first popularized by the NHL's Colorado Rockies in 1976 and spread throughout the state, eventually becoming a signature jock jam.

Following Glitter's conviction in 2006, the song began to be played less and less in arenas and films. The NFL banned the track in 2006, but, as this Billboardstory on its use from 2014 notes, stadiums still use it often enough to net Glitter a sizable chunk of change: According to a source quoted in the article, the song still generates about $250,000 a year in royalties.

Set in 1981, Joker is filled with period-specific details, but its soundtrack largely resists using pop and rock songs of the era for much of its runtime. Besides the quoting of Stephen Sondheim's "Send in the Clowns" from the 1973 musical A Little Night Music, sung by a buffoonish Wall Street goon taunting Joker on the subway, the music in the film mostly consists of an eerie, atonal score from composer Hildur Guðnadóttir, who also created the similarly unnerving music for HBO's Chernobyl. It's all slowly building dread and simmering tension -- no release.

But once Phoenix's Joker becomes more violent and out of control, the film's soundtrack shifts and makes room for "Rock and Roll Part 2." The steps moment, with its full view of Phoenix's awkward movements, feels designed to create a queasy sense of catharsis. Though it's clearly a troll-like choice on the part of Phillips and film's music supervisor to feature Glitter's music in the film, the juxtaposition of the overplayed song and the character's dancing does have a certain stomach-churning, eyebrow-raising potency. Like many scenes in Joker, the try-hard obviousness is itself the point.

In his slightly chaotic press tour for the film, director Todd Phillips has yet to comment on the song's usage. But it's worth keeping in mind that Phillips, a self-styled provocateur who began his career with 1993's Hated, a documentary about transgressive punk act GG Allin and the Murder Junkies, has a history of making controversial casting decisions in his Hollywood films. The first movie in The Hangover trilogy features a lengthy cameo from Mike Tyson, who was convicted of rape in 1992, and the sequel was initially rumored to feature a cameo from actor Mel Gibson until the cast and crew vetoed the decision.

As audiences and commentators continue to criticize the Glitter needle-drop, the discussion has already shifted to the question of payment. How much could Glitter make from the placement of the song? In a Yahooarticle, Ray Bush, the managing director of The Music Royalty Co., explained that Glitter was likely paid a one-off "synchronisation fee" for the song. “It can range from £500 for smaller acts up to £250,000-£500,000, depending on the artist and the importance to the narrative of the film," he explained. At the same time, the movie will also likely lead some new listeners to seek out the track on various streaming platforms. Currently, one of the top comments on the song's YouTube page reads, "I feel like I can dance to this going down some stairs."