Why does the kissing in Netflix's series about a zombie disease spread by kissing have to be so... wet tongue-y???

I was almost too excited for Kissing Game. Netflix's new Brazilian mystery show about a bunch of teens living in a small cattle ranching town who start coming down with a strange, deadly disease spread by exchange of saliva seemed like appropriate programming for [gestures broadly] our current situation. The aesthetic is cheekily modern: the kids wear matching pink pressed school uniforms around town, the principal makes everyone who visits her office sit on a giant exercise ball to improve their posture, and there are occasional neon-lit raves in the woods during which the youth paint their faces, take party drugs, and make out. It's fun, odd, and at times genuinely sinister, and, oh my god, the kissing in this show is so gross. 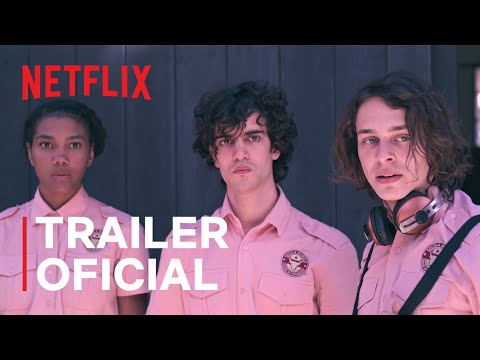 I don't know if it's the pandemic-brain I've developed during quarantine talking or if it's the show's ever-present threat of disease spread by mouth-to-mouth contact, but the kissing in Kissing Game is hilariously disgusting. In my twenty-odd years on this planet I feel like I've learned my way pretty confidently around the mechanics of kissing, but this is just an entirely new level of two people mashing their faces together. First of all, there is so, so much tongue. The tongue-to-tongue contact is so prominent that there were moments where I genuinely had to look away from my television in order to cringe in peace, and nearly missed the shot where a nameless partier with gold leaf all over his face steps up to the camera and licks it.

And then, most of it is happening in slow motion, so you reeeeally get acquainted with the mouths, the tongues, and the occasional strings of spit left behind when two or three of these individuals really start going at it. A lot of the action takes place either in little video clips taken on the school grounds by students and uploaded to their social media apps (a very creative and fun way to incorporate the Instagram Stories format into a TV show), or at the aforementioned woodsy raves where everyone is high and so everything is distorted and moving at half-speed. We get it! It's a show about kissing! But also: gross!

And, finally, there's the ever-present knowledge that kissing in this show leads to sickness and, possibly, death, that makes a mind such as mine, primed by a global pandemic, recoil at the mere thought of touching someone else's mouth with my own. The dominos start falling in the first episode, when a bunch of the schoolkids go to a dance party in the woods and have drugged makeout sessions with their pals, leading to a string of cases of an unknown disease. A group of them even make an online contact map, tracing who has kissed whom, and who could be carrying the illness. Unfortunately, these kids just won't stop kissing.

"STOP IT!!" I screamed at my screen when two boys show up to yet another forest rave and are handed plastic face masks so they can kiss with impunity. The one thing that they shouldn't be doing, the one thing that it is in fact quite easy not to do, they are, nonetheless, doing. If it is indeed the show's angle to make the very concept of kissing into something absolutely intolerable, it does a great job of it! Maybe there's a lesson here about humanity's tragic inability to stop ourselves from committing harmful, impulsive acts, but for now, all I can think about is that I never want to see another human tongue again in my life.