What American TV, and Americans, Could Learn From Korea's Wildest Game Show

A robot speeds around from building to building, offering people -- from firemen to bus drivers -- a chance to breathe air shipped directly from Jeju Island. A man, standing 5'6", gathers friends of similar height for a party designed specifically for them, taking a bus that has had all the standing grips lowered to go to a custom-designed room where they don't need a ladder to change the lightbulbs. Another man dresses up as Ryu and sets up a Street Fighter console in the back of his car, driving all over Seoul to challenge the best celebrity gamers to increasingly difficult matches. This is all in just one episode of the South Korean variety show Infinite Challenge.

American game shows are one thing -- your American Ninja Warrior, your Survivor, your Beat Shazam (if that's still a thing) -- but Korean variety shows are on a whole other level. It's that very insanity that's kept me watching Infinite Challenge for going on a decade now; the crazier the episodes get, the more I love them. Every summer when I was growing up, my family visited Korea to see my entire extended family. Large chunks of that time were spent planted in front of the TV, as most of my cousins weren't close enough in age that we'd hit the town together, and my Korean was a little lacking for me to be comfortable around the adults. For the most part, I'd watch the channels that played American movies (for instance, I first watched the 1999 The Mummy while I was in Korea). The sole exception to the rule was Infinite Challenge, the show that, to me, is one of the best emblems for opening your heart to the unknown. So why have Americans barely heard of it? 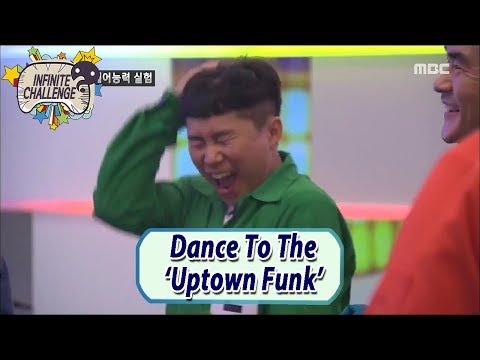 For an hour and a half each week since it first began airing in 2005, Infinite Challenge has pitted some of the country's most famous entertainers against each other in scenarios that vary from pretending they're Ghostbusters to crash courses in competitive wrestling. Infinite Challenge is known as "the nation's variety show," and earned recognition from various Korean broadcasting awards shows every year (including the Grand Prize and the People's Choice Award for Entertainment Program of the Year at last year's MBC Entertainment Awards). It's one of the most ubiquitous presences in Korean media, but despite how popular it is in its home country, it hardly has any presence anywhere else. 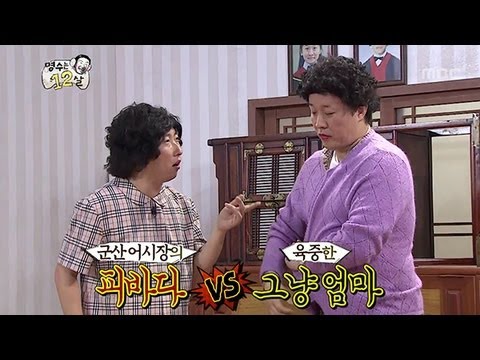 Led by Yoo Jae-suk (himself known as "the nation's MC" given his popularity, and perhaps unsurprisingly my favorite of the group), the members of Infinite Challenge -- currently made up of Park Myeong-su, Jeong Jun-ha, Haha, and Yang Se-hyung -- take on challenges that range from getting in shape to auditioning for the runway in Milan, trying not to dance to "Uptown Funk," evading the police, and (above) pretending they're all 12 years old again. Early in the show's run, the challenges were entirely physical and sports-oriented, which, since none of the show's cast members were particularly suited to the tasks put to them, resulted in the visual gags. With its reliance on extravagant costumes, pranks, and skits rather than conversation, and compounded by the Asian talk show trademarks of onscreen graphics to emphasize emotions such as skulls to indicate insults or flowers to indicate happiness, Infinite Challenge was easier for me to figure out than regular talk shows or K-dramas. The simple fact that I could understand the show made it something for me to hold onto while trying to reconcile the differences between Korean and American TV. 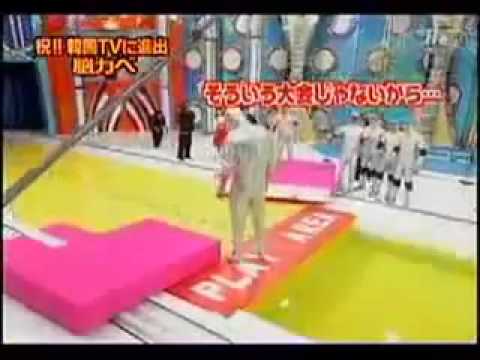 Western perception of Asian variety and game shows exists in an uncomfortable liminal space. Over time, they've become exotic jokes (see: Saturday Night Live); any laughter they prompt is at the expense of the participants rather than in good spirit. For instance, I remember feeling uncomfortable with the near-derisive reactions to the Japanese game show Brain Wall (above, and note the YouTube video title), which aired in Japan from 2006 to 2009. The inclination towards immediate dismissal has lessened over time, but there's still no equivalent -- nor market -- in Western culture for the Asian variety show. If I hadn't been exposed to the show as a child, I likely wouldn't still be watching it. It's not particularly easy to access, and no one in my immediate group of friends watches, let alone knows about, the show.

That doesn't mean Infinite Challenge is off the Hollywood radar. International guests have included Jack Black, whose first appearance on the show in 2016 made a few waves (he later discussed his experience on Ellen), and ESPN and CNN recently ran clips of the show after Stephen and Seth Curry took the team on in an increasingly bonkers game of basketball. 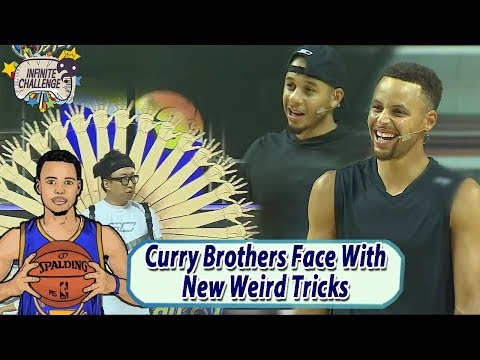 In the episodes aired immediately afterwards, which sent the show's cast to Los Angeles to audition for various American productions (GLOW, Orange Is the New Black, Santa Clarita Diet, and House of Cards), the show's cast called the ESPN and CNN clips their main claim to fame, asking various people -- in self-deprecation and self-awareness -- if they'd seen them on TV.

The recent LA episodes saw the Infinite Challenge cast reunite with Black, who reprised his most well-received bit: singing along to K-pop songs until the cast can figure them out. There's no sense of shame or archness to any of the proceedings; Black throws himself wholeheartedly into singing nonsense, all in the spirit of fun. 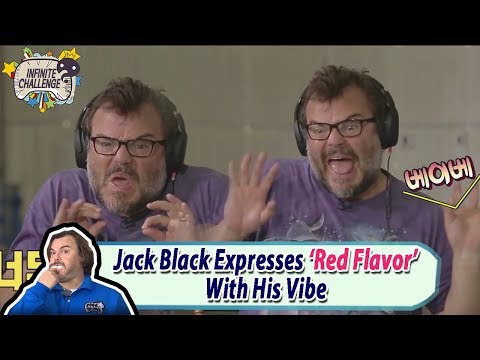 The success of Infinite Challenge relies entirely on this kind of earnestness -- an earnestness that keeps me coming back. The cast is constantly put into situations that sound humiliating on paper (a 2013 episode called "Famous Princesses" had them all dress exactly the way you'd suppose, and act accordingly catty), and though it's a show staple that they rib each other mercilessly, it's the kind of ribbing that comes out of being a team for years rather than out of any real mean-spiritedness.

Take, for instance, the Speed Rowing Special. Despite how long it's been, I still remember the special as clearly as if it'd aired just last week. For five months in 2011, the cast trained to compete in the STX Korea Open Regatta. It was and still is the biggest challenge that the show has taken on, and maybe the most characteristic of the ethos of Infinite Challenge as a whole. The cast are all talk show personalities and comedians. The rest of their recruited rowing crew was made up of musicians. The fact that they'd train for a real sporting event -- and for such a long period, no less -- was a surprise. 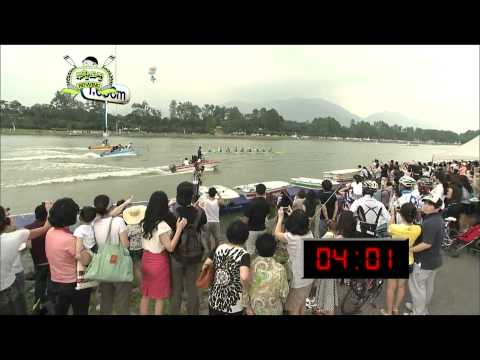 But train they did, and the last episode of the special, in which the motley crew embarks on the actual race, was wrenching for knowing just how much effort the team had put into getting ready. Though they finished the 2000-meter regatta, the Infinite Challenge came in last place. Many of the cast shed tears (of gratefulness for support as well as apology for their placing) after getting across the finish line, and the sincerity of the special made me cry, too. It wasn't a challenge with any gimmicks or jokes; it banked solely on the willingness of the cast to band together and work hard, and on the willingness of the audience to root for them. It's a principle that transcends language.

Jack Black's appearances on Infinite Challenge serve as a more bite-sized distillation of this truth. There are translators working between him and the cast, but there's not really an acclimation period. He jumps right in, and figures out what's going on much in the same way that I did when I first encountered the show as a kid. The best guests all possess this willingness to let go. In the most successful segment of the audition episode, the cast's auditions for House of Cards were overseen by Michael Kelly (who plays Doug Stamper on the show). Whereas many of the other audition bits were based on humiliation in a way that didn't quite jive with the spirit of the show (a lot of it involved ramping up what they had to act out), Kelly's eagerness to participate and have fun rather than sit back and have the cast make up the deficit was a welcome change.

For those unfamiliar with Infinite Challenge and with Asian variety shows as a whole, seeing the show as more than a joke requires looking beyond the limit of what's considered "normal," which is best exemplified in a sort of meta way, i.e., the episodes in which a foreign guest really clicks with the hosts. The willingness to look silly without winking at the camera counteracts any embarrassment that would come out of it. Watching the show requires that same kind of good faith, too. It's a principle that holds not just for television programs, but for cultures on the whole; that display of uncomplicated sincerity and open-heartedness is the reason I love Infinite Challenge.

In other words, it's not a matter of getting lost in translation. I still don't understand all of the dialogue on the show, but that's never been a prerequisite to my enjoyment. Infinite Challenge hangs on the heart rather than the head. The cast left LA still waiting to schedule callbacks, and though it'd probably be a miracle if any of them were actually cast, I still hope that they are. It's time for the stereotype of Asian game shows to retire, and there's no better show to do that than one in which the surmounting of cultural barriers is key to the show's success. Infinite Challenge deserves to be seen. It's a show that's always been close to my heart despite the fact that I'm not quite its home market; I hope the same can be true of others, too.

Karen Han is a writer based in New York City. Her work appears on Vox.com, The Atlantic, SlashFilm, and New York Magazine's Vulture.