'La La Land' Is a Musical for People Who Hate Musicals

Read our complete ranking of the Best Movies of 2016 for more on what to see this year.

Fact: the musical is the most polarizing medium in the history of people pretending to be other people. Spontaneous song-and-dance shtick either fills your heart with joy or sends your index fingers flying towards ear holes in Pavlovian terror. For 99% of the planet, there's no in-between.

But Whiplash writer-director Damien Chazelle dreams of harmony, and La La Land is his peace offering. Yes, the movie whispers through dance sequences and ditties, there is more to this genre than singing cats. La La Land extends a hand to anyone scarred by a barrage of two-steps, jazz hands, and glitter costumes -- and bets are, you'll grab hold.

The pairing of Ryan Gosling and Emma Stone, who can sing just well enough, is the reason. Gosling plays Sebastian, a jazz purist who's dying to open his own club. Stone is Mia, a barista-cum-actress who spends equal time auditioning and daydreaming about making it big. Romance fans their fires. Life deals them consequences. And their numbers, a mix of fragile love songs and bursting-from-the-seams showstoppers, are rough around the edges. The way you might hum your way into an improvised tune is how every song in La La Land organically comes to life on screen. These are actual human people performing actual human songs, rather than Auto-Tuned celebrity cutouts burning $100 million on karaoke. You don't know how deep a warbled note can dig until you see this movie in a world where Rock of Ages exists. 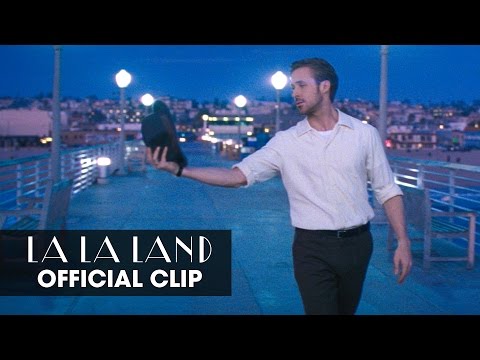 I see you resisting and reaching for your earplugs. Have faith. Though it indulges in musical-lover catnip, lifting bits from Fred & Ginger tap dance movies to 1960s French operettas, La La Land's metronome ticks back to reality at the all right moments. About halfway through the movie, after a meet-cute duet and a dance among the Griffith Observatory's stars, our star pair falls back into a pleasant rhythm. Thanks to Gosling and Stone's chemistry, previously ignited in Crazy, Stupid, Love, you could bask in it.

Then Chazelle changes keys. Love starts looking like sacrifice to two people who thought they knew what they wanted. For a stretch, the flashy numbers disappear, replaced with pensive piano tunes and bickering. These are not the perfect people we were sold. Sebastian prays at Muddy Waters's altar, a noble luddite, but he might be a schmuck. (No, I know he's a schmuck.) Mia's where's-mine soul-searching screams of privilege. In retrospect, maybe their L.A.-at-sunset life glowed a little too bright. When La La Land drops the glamorous façade, even the most ardent Broadway opponent will pine for the music to come back on.

Like the jazz that it admires, La La Land zigzags at the players' tempo, not when we expect it. Sebastian and Mia are flawed creatives, everyday millennials who wish they could be stock characters in a Hollywood movie. Gosling and Stone, perhaps from their own experiences navigating the business, understand and feel for them. We're rooting for the pair to nail auditions, knock out performances, and survive.

Chazelle doesn't go easy on them. He's kinder to the audience, gifting a safety net of L.A. parkway dance numbers and musical montage fantasies. And that's why haters and lovers alike may download the soundtrack on the fly as they leave the theater: La La Land is a construct of memories and dream fragments that, without the movie's musical notation, only your slumbering brain could conceive.

Oh, and no singing cats. I can't stress that enough.

La La Land is now out in select theaters.