Inside the Forgotten Movie That Scientology, Stephen King, and Silicon Valley Made Possible

Twenty-Year-old Brett Leonard hightailed it out of Ohio in the spring of 1982. He had $243 in his pocket and a Chevy Nova with no reverse. That would be fine -- he wasn't looking to go backward.

Leonard landed in Santa Cruz, California; he was ready to make movies but wasn't ready for Los Angeles. This was the right decision. Before too long, Leonard found himself surrounded by "the digitati of northern California." Steve Jobs, Steve Wozniak, and other influential Silicon Valley players routinely came up to party in Santa Cruz. Leonard tagged along, "spouting his ideas fairly arrogantly and stupidly" and determined to do something. He did.

Though focused on the exploding tech industry, Jobs and his cadre of entrepreneurial geniuses exposed Leonard to an emerging, parallel universe: cyber art. Cyberthon, a legendary "24-hour party where people were showing their wares from just the cyber-universe, both technically and creatively," was a bacchanalia of futurist thinking where Leonard picked up obsessions he still harbors today: computer-generated imagery and windows into virtual-reality world. With imagery in mainstream movies, a journey that would involve Scientology-sponsored commercials, ritualistic geometry, a legal battle with Stephen King, and in the end, his first big showbiz moment: The Lawnmower Man, a groundbreaking science-fiction movie that imagined virtual reality 25 years before anyone watched 360-videos through a home-use headsets.

Step one: scrap the source material

Stephen King's 1975 short story "The Lawnmower Man" focuses on an inter-dimensional being who appears to be a killer lawnmower. Like most of King's work, movie producers were hungry to bring the story to screen, and they turned to Leonard for help, impressed by his shoestring-budgeted work on The Dead Pit, his zombie-themed first feature. The director's only issue was that "The Lawnmower Man" sounded like it would make an awful movie.

"Needless to say, I didn't want to do that," Leonard affirms. "But I told them I'd been looking for a way of essentially making this VR movie that I had in my head." Inspired by an idea from the writer and philosopher Jaron Lanier, the man who coined the term "virtual reality," Leonard saw an opportunity to fit his audacious look at technology into the nooks and crannies of "The Lawnmower Man." The main character of The Lawnmower Man would be an idiot savant who makes a living mowing lawns. That's where the connections basically ended. "I saw what VR was and I instantly felt this is the movie I wanted to make. I just knew, I just felt it in my bones." 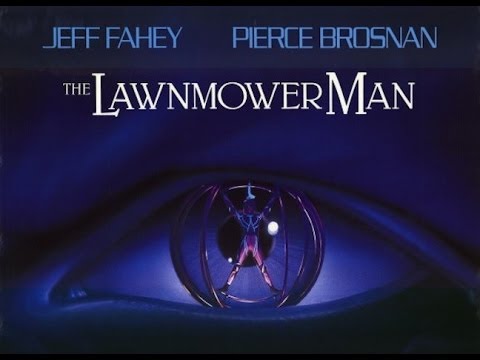 Leonard calls his movie one of the most "radical adaptations ever," and you can see what he means when you watch it. The movie version of The Lawnmower Man stars Pierce Brosnan as Lawrence, a scientist who believes he can increase human intelligence using virtual reality. To test his theory, he conducts a series of VR-related experiments on an intellectually disabled greenskeeper named Jobe (played by Jeff Fahey). Jobe learns to play simple VR games before developing telepathic abilities that cause strange hallucinations in his virtual worlds.

This alterations didn't suit King, who sued the producers for marketing the movie as "from the mind of Stephen King." The lawsuit was a precedent-setting case in the realm of literary rights and producer hoodwinking, and forced producers to eventually recall any and all VHS tapes bearing King's name. The turmoil didn't poison The Lawnmower Man production ("Stephen saw the film, liked it, and came out in support of me and the film," Leonard says), but appeasing the source material's creator was the least of the director's worries.

Two things made Leonard's endeavor to create VR-emulating imagery on a budget even more challenging. The first was volume. As Leonard explains, back in 1991, Terminator 2 was a gold standard with seven minutes of computer graphics effects. "We had 23."

The second was that the director had a certain aesthetic that departed from simulating reality, as most filmic CG work was aiming to achieve. Instead, he wanted what he calls an "abstraction of reality." For that reason, Leonard looked to innovative companies experimenting in VFX at the time.

He landed on Angel Studios, which until then had only done mostly "Mexican tire commercials." What caught Leonard's eye was an ad for L. Ron Hubbard's Dianetics, the basis for Scientology. The promo featured an exploding volcano, the depiction of an event Hubbard described as the moment Xenu, head of the Galactic Confederation, solved Earth's overpopulation problem by dropping a hydrogen bomb on the principal volcanoes. Religious implications aside, the video captivated Leonard. "It was very early computer graphics, but still real for that time," he says.

While Angel would mainly concentrate on the 3-D effects in The Lawnmower Man, such as the CG characters, an opening virtual-reality gaming sequence, and an infamous cybersex sequence, Leonard chose another studio to contribute to the more artistic and painterly effects sequences he had also envisaged. These sequences were so peculiar that the studio, Xaos, Inc., had to develop their own software just to accomplish the work.

Step three: have a religious experience

Advancing computer graphics wasn't enough. Leonard also intended to subvert the very concept of blockbuster-worthy special effects. "Some people will look at those effects and go, 'Oh, they're so dated now.' But the thing is, it's not that. It's that visual effects have become all about making New York look real as it gets destroyed." The Lawnmower Man aimed for computer graphics that were endemic and organic to the computer as reality -- an accomplishment Leonard doesn't believe has been fully celebrated, even today.

To achieve this subtle transcendence, Leonard incorporated geometric designs and iconic ritualistic shapes into the virtual-reality sequences. There was even a sacred geometry consultant working hand-and-hand with the designers.

"To this day I still get someone tweeting me saying, 'My God, is that the Yantra Mantra that you put there in one frame?' And because of that richness underneath the surface layer I think the film continues to have a life in that sense."

The Lawnmower Man isn't remembered as a huge box office success, nor do film scholars remember it as much of anything. But having grossed a domestic box office of $32 million against an indie budget around $10 million, the science-fiction movie turned out to be a significant hit.

"People called it a cult film," says Leonard. "But it made a huge amount of money worldwide. It was the number one independent film of the year that year. So its financial success was definitely not cult, it was mainstream, but it's thought of as a cult film in terms of its subject matter. Even though now that subject matter is about as mainstream as it gets, given that the VR industry is exploding."

Prescience keeps The Lawnmower Man's renegade spirit alive. Today, the virtual-reality technology Leonard dreamed up for the movies is both accessible and available, offering everything from photorealistic out-of-body tours and the types of dreamlike experiences the director chased in his film.

Leonard is still right there with it. After The Lawnmower Man, he went on to direct another VR-inspired thriller, Virtuosity, starring Denzel Washington and Russell Crowe, before moving away from features into an area closer to the cyberart he admired years ago. Today, Leonard runs Virtuosity (named after the movie), a VR company he started with VFX industry veteran Scott Ross. "It's such a wild time for me because I'm very involved with the actual virtual reality industry now," the director exclaims. "There's billions of dollars going into it. I'm very focused on narrative, interactive narrative story worlds and how that all happens."

The director of The Lawnmower Man running a VR company is a surefire way to make sure The Lawnmower Man's legacy continues, even if its availability as a film to stream online or purchase digitally seems to have been stymied. After a half-baked 1996 sequel, the original movie became the modern equivalent of a "lost film." It's currently unavailable on Netflix or other streaming services in the US, nor can it be rented off American iTunes.

In June, boutique distributor Shout! Factory will rescue The Lawnmower Man from total obscurity with a Collector's Edition Blu-ray. According to Leonard, the current rights holders had been trying to get an episodic television series based on the film off the ground for several years. Interestingly, that idea has now morphed into a format that seems much more apt: a virtual-reality series inspired by the film and produced by Jaunt, a VR content company.

For Leonard, the fact that The Lawnmower Man maintains relevance has caused the director to rethink what he originally created. "It's so very interesting to me that some 25 years later it's all coming around again and there's just an entirely new respect for the film, and an entirely new perspective on it. Essentially I'm walking into the reality of a movie I made and now living it. That's pretty weird."

Ian Failes writes about visual effects and animation, and wishes the VR in The Lawnmower Man was real. Follow him @vfxblog.