How to Survive in the Wilderness Like Leonardo DiCaprio

In interviews for their Golden Globe-winning, Oscar-seeking vision-quest The Revenant, both Leonardo DiCaprio and director Alejandro González Iñárritu have emphasized just how gritty, challenging, and hellish the shoot was. Crew members quit in protest. A particularly unlucky actor was reportedly dragged naked along icy terrain for one of the film's epic battle sequences. The pampered "pussy posse" king himself ate raw bison liver. In case you didn't realize: these men are very serious.

That's a testament to the source material, Michael Punke's novel based on the life of real 19th-century frontiersman Hugh Glass. No slouch when it came to acts of physical endurance, the Pennsylvania-born fur-trapper really did many of things depicted in the film: he was attacked by a bear, left for dead, and eventually traveled between 200 and 250 miles back to civilization. And he did it all in 1823 without a smartphone!

Well, lucky for us, we've got survivalist websites, YouTube tutorials, and years of Bear Grylls episodes at our disposal. So, with an assist from the wise sage Google, I've put together a guide to replicating The Revenant's brutal physical feats should you ever find yourself screwed over by Tom Hardy and left for dead in the wilderness. (Warning: some mild spoilers for The Revenant follow.) 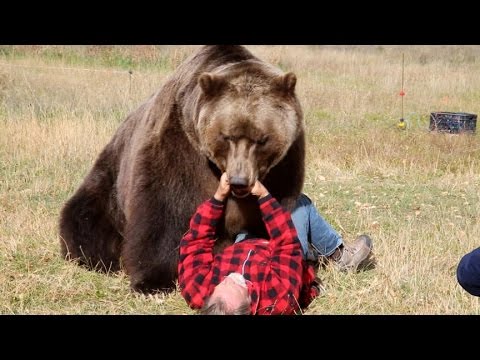 How to fight a bear

Let’s clear this up again in case you’re still confused: Leonardo DiCaprio does not get raped by a bear in The Revenant. That rumor, which was spread all around the internet by the alarmist siren call of the Drudge Report, is patently false, based on a bizarre misreading of the bear attack that does appear in the film. As for the furry grudge match itself, it’s pretty exciting in the context of the story, surpassing other man vs. bear sequences in classics like Legends of the Fall and Anchorman.

So, what’s the key to fighting a bear? According to this WikiHow, your best bet is to not get in a situation where you’d have to fight a bear in the first place. “If you can prevent an encounter with a bear, the rest of the steps are unnecessary,” it says. “Bears are reclusive creatures, and they generally prefer to steer clear of humans.You can help them to do so by announcing your presence when you’re exploring their home environment: talk loudly, sing, or carry ‘bear bells’ so bears have time to escape you.”

That’s logical enough, but let’s say you’re really jonesing for a bear fight. Like in any physical confrontation, the key is to know your opponent: is it a black bear or a grizzly bear? As legendary Hollywood animal trainer Doug Seus, explains in the Good Morning America Video embedded above, if a grizzly attacks you should speak in a monotone and slowly walk away. If you encounter an aggressive black bear, which are typically more timid than grizzlys, you should try to intimidate it and, if attacked, Seus says “fight it with everything you’ve got.”

If things get dicey with a grizzly? Cover your vitals and get on your stomach, much like DiCaprio does for much of bear attack in The Revenant. In the film, DiCaprio eventually defeats his fish-loving rival, but he had one key advantage you won’t have in a hypothetical bear brawl: his enemy was created by the SFX wizards at ILM. You won’t be so lucky.

How to fix those broken limbs

After surviving his bear attack, DiCaprio is horrendously injured, sporting some wounds that recall the excessive body horror of Mel Gibson’s Braveheart and The Passion of The Christ. He looks like he won't make it to morning, much less survive to tell his tale. Yet, eventually, he learns to walk again, hobbling across the the harsh wasteland of Montana and South Dakota sporting a bear carcass as a coat.

While you may not be able to emulate Leo’s Workaholics-aping style, you can repair your own broken limbs in the wild -- though, again, it’s probably not a great idea. Your possible treatment depends on the type of fracture: open, like when a bone is sticking out, or closed, where there’s no open wound. According to this article on The Ready Store, “If you feel that you need to quickly place the bone back in position you can use a tree notch to assist you in holding your arm in place while you adjust.” Similarly, this article on Wilderness Survival shows that, in the wild, trees are your friends: you can use forked branches or saplings to make a splint if things get especially dire.

From Edgar Allen Poe’s The Cask of Amontillado to Quentin Tarantino’s Kill Bill Vol. 2, the fear of being buried alive has gripped artists for a long time. The Revenant adds to this tradition by keeping things simple: DiCaprio doesn’t get a casket or even a gravestone -- just a big pile of dirt shoveled by Mad Max himself.

How would one potentially survive this tricky situation? As this Mental Floss article points out, most historical figures that have survived live burials were in coffins, so they just had to knock really hard and hope someone heard them. According to a piece in Popular Science, your survival time depends on the amount of oxygen available in the coffin, meaning you could conceivably live for 10 minutes or even 36 hours. In that time, you’ll want to put your shirt above your head and attempt to breach the coffin by kicking. In the film, Leo is comparatively lucky in that he has only a thin layer of dirt placed on him.

Buried deep in the dirt without a coffin? Sorry, you’re probably as dead as Leo at the end of the Titanic.

Bleeding out? Cauterize that wound with gunpowder.

A survival movie is only as good as its best self-administered medical procedure. In Cast Away, Tom Hanks fixed his toothache by hitting himself with the blade of an ice skate. In 127 Hours, James Franco chopped off his own arm. In The Revenant, Leonardo DiCaprio goes full-Rambo III by cauterizing his own throat wound with gunpowder and a flame.

Is this safe? No. Is it possible? Certainly. A detailed post on the Stuff You Should Know blog points out that this is an incredibly painful procedure that should only be attempted as a last resort. “In terms of cauterization, it becomes a viable option when you can’t stop the bleeding any other way, like when using pressure or tourniquets,” writes author Chuck Bryant. “If you’ve cut a major blood vessel this could very well be your situation.”

Let’s say that like Leo, you’ve reached the point of no return, you’ve got vengence to take care of, and you have gunpowder handy. What do you do? According to Bryant, “Pour a thin covering of gun powder onto your wound, light it with a match, and let it flame up for a couple of seconds before putting it out with a damp cloth.” Ouch.

In addition to the pretty exciting example of the method in action via Discovery's Dual Survival embedded above, you can also find a helpful video guide on the subject from the Medicine Journal here.


When in doubt, nap inside a dead horse

In one of the movie’s most breath-taking scenes, DiCaprio barrels over the side of a cliff on horseback in a Point Break-worthy feat of extreme equestrian sports action. Sadly, his horse does not survive the fall, so he ends up pulling a Luke Skywalker and using his horse as a Tauntaun sleeping bag. If you remember one moment from this movie, it will probably be seeing Gilbert Grape stripping down to nothing and getting intimate with the insides of a dead horse.

Given how strange the scene is, it’s not surprising that critics have already questioned its veracity. Writer Laura Bradley over at Slate got to the bottom of it by e-mailing wildlife experts who confirmed that a dead animal like a horse could provide some useful residual heat for up to six hours. Robert Reed, a research wildlife biologist with the U.S. Geological Survey quoted in the article, has an even more helpful tip: “I'd pull out the guts but keep the liver with me as a late night snack.”

So what do you do if you’re lost in the wilderness with only a dead animal for warmth? Climb inside that carcass and start praying for that sweet, sweet Oscar.

Dan Jackson is a staff writer at Thrillist Entertainment and he still thinks DiCaprio should've won his Oscar for Wolf of Wall Street. He's on Twitter: @danielvjackson.