HBO Max's 'Let Them All Talk' Is a Steven Soderbergh Surprise

The director's latest movie, which feels like it came out of nowhere, puts Meryl Streep on a cruise ship to London.

Let Them All Talk sounds like it's going to be a certain type of movie based on its plot summary. "Meryl Streep, Dianne Wiest, and Candice Bergen go on a cruise" could be a cutesy comedy in the vein of 2018's Book Club, in which Bergen also appears. Director Steven Soderbergh is a genre chameleon, so maybe he wanted to try his hand at the "ladies of a certain age discover themselves" movie. But Let Them All Talk isn't that predictable play. The movie, which debuts today on HBO Max, is not sweet. It's about friendship, art, and money, and how that can yield unrelenting bitterness.

Streep is Alice, a Pulitzer Prize-winning author at work on her latest novel. She won't tell her new agent Karen (Gemma Chan), or anyone else for that matter, what it's about, though there are rumors she's revisiting one of her most famous characters. Alice has been honored with a prestigious award being presented in London and, when she insists she can't fly, Karen offers to get her there via the Queen Mary 2. It's a sneaky suggestion. Unbeknownst to Alice, Karen also plans to come along to get a better sense of what's contained within the tightly guarded manuscript. 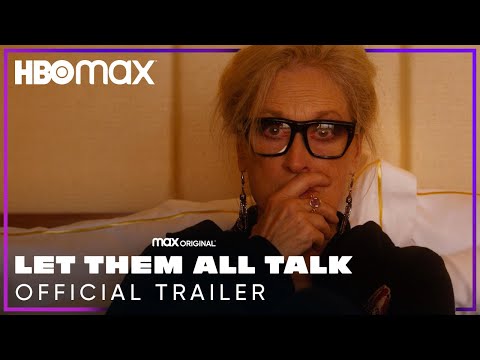 Alice refuses to travel alone, and she invites three guests: her nephew Tyler (Lucas Hedges) and two college friends, Susan (Wiest) and Roberta (Bergen). The dynamic between Alice, Susan, and Roberta is initially hard to figure out. They clearly are not as close as they once were. Susan, who works with female inmates, is reluctant to go along on the trip, while Roberta, a lingerie salesperson in Texas, acquiesces immediately, but has no interest in bonding with Alice. Why are they here for this ride? Is Alice using them to some degree for her latest project? Or is she really determined to rekindle old relationships? Roberta, meanwhile, has an ulterior motive: She is convinced that Alice based the protagonist of her most lauded novel on her and ruined her life in the process. Now is her chance for retribution. As Alice spends her days writing and swimming, the other women socialize and play board games, and Karen sidles up to Tyler to ply him for information.

The screenplay was sketched by short story author Deborah Eisenberg, but filled in with improvisation from the cast, which in and of itself feels like a remarkable achievement given the depth of unspoken history embedded in every interaction. (It also allows us to assume that Wiest came up with the line "bow down, bitch" herself.)

Streep's performance feels like a counter to the ham sandwich served up in her other movie released this week, Netflix's The Prom. Alice is deliberate and self-absorbed, but not the ice queen she initially appears to be. Wiest places herself in a neutral zone as peacemaker, just attempting to appreciate this moment of luxury she has been given. It's Bergen, however, who gives the most striking performance. Roberta is both shameless and full of guilt at the way her life has turned out. She trolls the ship for eligible, wealthy bachelors, attending every function in order to walk away with a rich beau. She refuses to hide her anger with Alice even as she refuses to actually open up about why she is so angry. Bergen layers the role with a Texas twang and unrepentant attitude.

Soderbergh and the cast filmed in real time as the ship was making its way across the Atlantic, and the director intersperses almost documentary-like footage of the crew completing tasks like doing laundry and making meals. These details heighten the sensation that this is a piece about transaction, and how that's embedded into every human interaction, artistic or otherwise.

Tyler and Karen—who is portrayed by Chan with a cunning that is never mean-spirited—develop a charming friendship that's nevertheless rooted in Karen's desire to learn more about Alice's project. Tyler knows what he's getting into, but still develops a huge crush. Roberta has been so beaten down by life that she sees invisible dollar signs hovering over the head of every person she meets. Alice's reasons for bringing her old group along are murky, but whether she's mining the past for inspiration or looking for some sort of support, she clearly sees the company as personally beneficial.

Of course, part of the joy of watching Let Them All Talk is watching three screen legends bounce off of one another, but don't let that fool you into thinking it's just a story about gal pals. It's much more satisfying—and sadder—than that.