'Letterkenny' Is a Severely Underrated Canadian Comedy You Should Be Watching

I first encountered Canadian sitcom Letterkenny thanks to a short video that was posted somewhere on the internet a few years ago. It's the cold open for the show's very first episode, featuring its two leads, town tough guy Wayne (Jared Keeso) and his buddy Daryl (Nathan Dales), verbally annihilating two hockey bros (Dylan Playfair and Andrew Herr) who drop off Wayne's sister at their produce stand.

Though I've watched it many times since then, I still can't get over the quickness and playfulness of every line delivery -- "You can kiss my aesthetician" is something I think about daily. Letterkenny is the kind of show with speedy exchanges and relentlessly recurring in-jokes you really have to sit and pay attention to if you want to get the most out of them, which isn't something you might expect from a sitcom set deep within the grassy farmlands of Ontario.

There are 5,000 people in Letterkenny. These are their problems. So begins every episode of the show, which is itself a reference to the sitcom's humble beginnings as a 2013 webseries called Letterkenny Problems, created by Keeso and Jacob Tierney (who recurs on the show as an aggressively closeted Evangelical pastor). Canadian network Crave TV picked it up for a series in 2015, and incorporated a few of the best sketches into the first season's episodes. In 2018, Hulu acquired exclusive American streaming rights, and the brand-new Season 8 -- as well as the entire rest of the show -- is now streaming on the network.

Letterkenny's "problems" are, of course, relative. Many of the show's plots revolve around Wayne getting into fistfights to prove himself as the toughest dude in Letterkenny and trying to find love after breaking up with his high school sweetheart at the start of the first season. The other members of the town include the "skids," the emo druggies who are constantly coming up with weird schemes; the "natives," the members of the local First Nations reserve who are constantly battling the hicks and the skids for turf; and the constantly losing hockey team made up of a bunch of beefy out-of-towners. It's perfect feel-good TV: nothing truly terrible ever happens to anyone, except for the guy who accidentally had sex with an ostrich (allegedly), and the whole town is populated by exactly the kind of man I find to generally be the best: large, charming bro doofuses.

A lot of it features Wayne, Darryl, and their overallsed buddy Squirrely Dan (K. Trevor Wilson) sitting around and simply shooting the shit about whatever's going on in their small town, occasionally involving Wayne's sister Katy (Michelle Mylett) in whatever weird ideas they come up with to pass the time. Seven seasons in, the show basically has its own language -- thankfully for us Yanks, the Letterkenny wiki includes a generous glossary of slang terms. A lot of it is hockey slang, which rivals Cockney rhyming slang in its intricacy ("Just blast clappers at the hash marks at the fuckin' plug tendy of ours." -- Sorry, WHAT???) The rest is near-Shakespearean wordplay and recurring puns, mainly to show off the intelligence of the kind of folks we'd otherwise dismiss as being stupid. 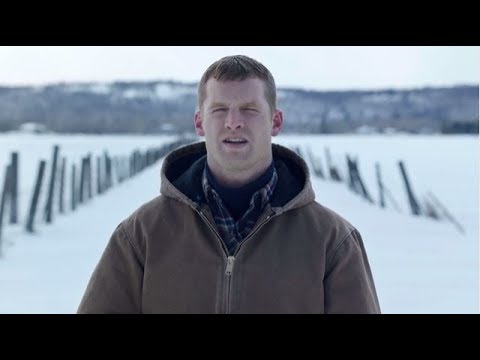 To top it all off, a lot of the show has to do with its characters coming to terms with and navigating a modern, evolving world full of newly recognized sexual orientations, genders, races, and all kinds of other ways people distinguish themselves. It's bro-comedy, but bro-comedy that does its damnedest, at the end of the day, to be quite nice. Amid all of the boys' many conversations of sexuality, racism, and inclusion, no one ever goes for low-hanging fruit. The balancing act of a group of straight, cis men discussing whether or not there's a wrong way to be gay but without actually saying anything anyone could deem offensive is inherently funny, and that's the kind of misadventure Letterkenny leans into (and something some people who believe "woke culture" killed comedy could learn from).

Like the best sitcoms, things in Letterkenny rarely ever change: the skids will always be creeping around their poster-lined basement, Wayne and Tanis (Kaniehtiio Horn), the leader of the First Nations gang, will always have some strange sexual tension, and Wayne, Daryl, and Squirrely Dan will always be sitting out on their stoop, debating society's complexities, exchanging complicated sex tips, and expounding on the virtues of Canada geese. You can tune in and join them anytime -- provided you understand a word they're saying.