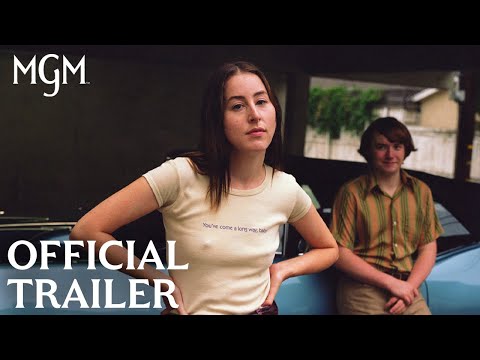 Paul Thomas Anderson is back in '70s California, where the sun is shining, David Bowie is playing, and Bradley Cooper looks like he's about to have a total meltdown. After directing 2017's bewitching costume drama Phantom Thread, his first movie not at least partially set in his home state, it appears the Boogie Nights filmmaker has once again returned to the San Fernando Valley for Licorice Pizza, a coming-of-age saga about young love set against the backdrop of the film industry. If you like your movie trailers with minimal plot details, some funny lines, and plenty of swoon-worthy images of people running towards each other, you're in luck.

For the last few weeks, Anderson was slowly rolling out this trailer by playing it at select movie theaters. But now it's online for everyone to see, and it gives you the first glimpse of Cooper Hoffman (the son of the late Phillip Seymour Hoffman, a frequent PTA collaborator) and Alana Haim (of the band HAIM, who Anderson has directed multiple videos for) as a young couple trying to make sense of adolescence and Hollywood. It looks a bit like the similarly poignant and nostalgic American Graffiti, but with Anderson's distinct comic rhythms. Mostly, it just looks fun. Look at that shot of Cooper, sporting a wild beard and hair combo as A Star is Born (1976 version) producer Jon Peters, smashing those car windows! That's what you go to the movies for.

Licorice Pizza, which was going by the working title of Soggy Bottom until recently, will debut in a limited release in theaters on November 26 and expand nationwide on Christmas.