In the early months of 2011, as the Obama administration's massive bailouts to the financial industry were sparking into action the legions of disaffected Americans who would participate in the Occupy Wall Street movement later the same year, movie posters with galaxy-brain taglines appeared throughout the New York City subway. "Everything is possible… when you open your mind." Or, more directly: "What if a pill could make you rich and powerful?" These posters heralded the arrival of a movie the moment demanded. That movie was Limitless.

The drunk-frat-bro premise, combined with the goofy, awards-show star power of Bradley Cooper and Robert De Niro, suggested this film could secure a place in the Good-Bad Movie Canon almost immediately. And boy, did it deliver. Not only did Limitless unleash the instantaneous dopamine rush of hearing Bradley Cooper deliver syntactically and semantically dubious lines like, "For a guy with a four-digit IQ, I must have missed something," Neil Burger directs like he's always wanted to be a David Fincher knockoff. In its own strange way, Limitless achieved something akin to Fight Club's pop culture status. It has proven a bizarrely persistent ideal of an achievable reality for a surprising number of actual grown human beings. Like, some people out there genuinely believe there's a way to use 100% of your brain—as long as you take the right drug (they're called nootropics) or develop the perfect sleep routine or drink coffee in a novel way or don't jerk off for six-month stretches.

Limitless gave voice to a nascent group of biohackers, those reinventors of American self-help principles who would have outsize influence on the Silicon Valley overlords ruling us today. It was co-opted by the self-help industry. It inspired internet writers to try the "real" version of the drug, because so many people search Google for "limitless drug" or "limitless drug real" that a media company could make ad dollars off the page views. In fact, if you search the name of the movie drug that unlocks super brain powers ("NZT-48"), you'll find a list of supplements claiming to do the same thing. There's Limitless YouTube. Limitless Reddit. As a cultural artifact of early 2010s America, it's invaluable. Its reach has become… limit-free.

Sorry! Got carried away by Limitless 10-year anniversary fever! Anyway. A pill that makes you smart, rich, powerful, productive, happy, etc., is essentially the American dream, a shortcut for the individual to become master of the universe. And while there's plenty of symbolic relevance in the movie to explore, the sheer absurdity of what Bradley Cooper's character, Eddie Morra, does with his infinite brainpower reveals a hilarious, albeit frightening, worldview. It's best just to have fun with it, so that's what we're going to do. 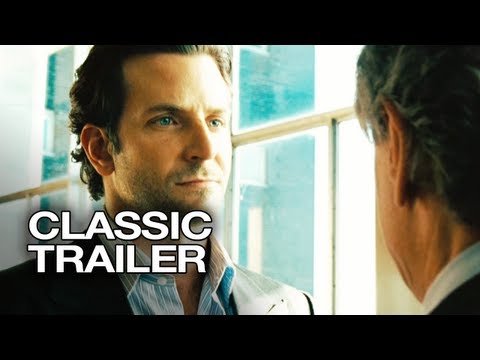 When we initially meet Eddie, Limited, he's one of the worst kinds of people on earth: a writer. He doesn't actually write anything, but he DOES have a book deal for a sci-fi novel with a premise that baffles the Regular Joe beer drinkers at the bar where Eddie goes when he should be working. His apartment is cheap and dirty. His hair is too long. His girlfriend is hot and smart and nice and accomplished, and she's obviously breaking up with him because he is broke, a loser, never going to get it together, nice but naive, yet still hot. He's Bradley Cooper, after all. But to this point in the movie, he's just another nice guy who finishes last.

Until! The fateful moment when Eddie meets his ex-brother-in-law, who tells him about this new drug named NZT-48 (that's what "the boys in the kitchen are calling it"). NZT is essentially Adderall, but it actually makes you as smart and effective as you feel on Adderall. Eddie gives it a shot, because now that he's without a girlfriend he has hit Rock Bottom, and the next thing you know, Eddie rattles off some fancy law knowledge to convince his landlord's demanding daughter to sleep with him instead of demanding his unpayable rent. Turns out he must've read something about legal cases before, and all that information was just camping out in the dark, inaccessible recesses of his brain for year, collecting dust. Thanks to NZT, it's free! Wow! This drug is incredible!

At this point, the NZT lifestyle closely resembles the simplistic self-improvement and personal growth strategies hawked by figures who have gained increasing influence in the decade since Limitless arrived. Eddie Morra may as well have been watching Jordan Peterson videos—the first thing he does with his newfound boundless intelligence and motivation is clean up his room. Good start! Then he needs to get his pesky novel out of the way, which he does in three days, because writing a novel, of all the activities that could occupy a Big-Time Brain Genius's mind, is small potatoes. A man with a limitless brain should be doing what all men with big brains do: finance.

So that's exactly what he does. He trades stocks. He has lots of sex. He makes money. He learns Italian while whipping his body into killer shape. He impresses at parties. He has more sex with socialites and models and other appendages of wealth. He realizes he can fight because he's watched kung fu movies. He makes more money. He eats at fancy restaurants. He jumps off cliffs into pristine waters. After sufficiently establishing his virtuosic money talents, Eddie meets with Carl Van Loon (seriously!), played with inexplicable austerity by Robert De Niro. Carl Van Loon needs help with a merger, and he knows Eddie Morra is the real deal because Eddie can see alllllllllll the connections and implications and bribes and deals going on behind the scenes, just by looking at a few papers in the back seat of a limousine. Things are going great for Eddie.

Except obviously he can't be trapped in his limitlessness—Eddie isn't the only person who's discovered NZT. The Russian gangster he borrowed money from to get his financial career off the ground got a hold of the drug and now chases Eddie around town, always wanting more. The man Carl Van Loon's negotiating with came out of nowhere to become a tycoon in a few short years, another clandestine product of NZT. At one point, Eddie's girlfriend (Abby Cornish) finds herself chased by a Bad Guy because she's unwittingly carrying the drug. Eddie instructs her to take a pill if she wants to get herself out of this mess, which leads us to the greatest scene in film history involving someone who suffers an injury from a child's ice skate.

The bad stuff keeps coming. Eddie's ex-wife reveals that lots of guinea pigs took it and died from the withdrawal, that she herself was on NZT and survived, but at the expense of her concentration. We knew a crisis would come from the film's opening sequence, which shows Eddie on the edge of a balcony, ready to jump before the people drilling into the door of his supposedly impenetrable penthouse get their hands on him. It's a sobering, authentic turn in an addiction narrative, one that sticks to the story told in the source material, the 2001 novel The Dark Fields by Alan Glynn. Everyone knows there's no such thing as a limitless upward spiral.

But the strangest thing about Limitless, a fact that scrambles my meager, underutilized brain every time I think about it, which is too often, is that it has a happy ending. Eddie Morra figures it out. He doesn't jump to his death. Having exhausted his supply of NZT and suffering from withdrawal symptoms, he faces the Russian gangsters who knocked down his door. He kills the lead gangster, and, realizing it's his ONLY choice, drinks the NZT-rich blood spilled over the floor, giving him the intelligence and strength required to take out the other goons and survive another day, though given the circumstances that led him to this point, it seems unlikely to be more than a temporary reprieve.

We'll never know exactly what happened next. This abrupt breakthrough prompts a leap into the future, when we see Eddie continuing his unstoppable rocket ship ride to the outer reaches of wealth and power. Unlike his counterpart from The Dark Fields, he has it all. He's not a writer anymore, thank god, but an independently wealthy politician. He's slept with everyone he could possibly want, and now has the love of his life back by his side. He's so smart that he outwits the mighty Carl Van Loon in a scene where he, a) predicts a car crash, and b) diagnoses Carl's heart condition simply by feeling his chest. Van Loon's only got a year to live! Eddie even tells Carl that he doesn't need the drugs because his brain synapses have transformed so much. He's not an addict at all. The crimes he committed were mere speed bumps on his road to becoming so smart he can rule all of America. The best part is that, like the rest of America in the past decade, he can just keep doing what he's doing, expecting no negative consequences and seeing no good reason to change his approach, despite the tangible destruction he's wrought.

In the end, not only does Eddie become his best self when he's on NZT, he's also the best in the world at using NZT. Where others have died or become incapacitated through overuse and withdrawal, Eddie has thrived. He's off the drugs, or if he isn't, he's figured out a way to manage his use so that it doesn't destroy his life. He doesn't just assimilate to society's demands, he dominates them without questioning their value. Unlike Fight Club, which suggests destroying credit card companies, Limitless proposes joining them. Eddie Morra used his unfettered intelligence to get super rich, and now he's going to be president. He'll know exactly which wedding to drone strike, because he's so smart he can see the future child of the union committing terrorist acts against the United States of America. OK, that last part isn't in the movie, but after 10 years, it's time for a sequel. There's no such thing as too much Limitless.