Earlier this month, the movie Serenity, a mystery-drama starring Matthew McConaughey as a man named Baker Dill who hunts a tuna fish named Justice, became available to stream on Amazon Prime and immediately became a topic of conversation online. It's not hard to see why: Written and directed by Peaky Blinders creator Steven Knight, the film, which flopped at the box office and earned mostly brutal reviews, is one of those ridiculous, star-filled thrillers with an absurd twist ending that makes for perfect "good bad" movie viewing. If you ever wanted to see what it would look like if you smushed together Double Indemnity, The Matrix, and a Jimmy Buffet song, this is the movie for you. Stream away!

I don't begrudge anyone's enthusiasm for Serenity, which is a total blast, but I'd like to use this opportunity to make the following public service announcement: don't sleep on Locke. What's Locke? Before he directed Serenity, the wildly prolific Knight, who it should be noted was nominated for an Oscar for 2003's Dirty Pretty Things and also co-created the game show Who Wants to Be a Millionaire?, wrote and directed this 2013 thriller starring Tom Hardy as stressed-out construction foreman Ivan Locke, a guy who drives to London and talks about the intricacies of concrete for 80 minutes.

That's the whole movie. Just Hardy cruising down highways in a BMW X5 as he commands his surprisingly glitch-free dashboard phone like a modern-day switch-board operator, toggling between his concrete-pouring co-workers, his frustrated wife and concerned children at home in Birmingham, and his mistress in London, who is about to give birth to his "bastard" child. And, yes, occasionally he yells at the ghost of his father, who abandoned him as a child, in the backseat of the car. Where Serenity is a baffling and mostly bad movie, albeit a fascinating one to think about and make jokes about, Locke is a baffling and good movie, one that lingers in the mind for weeks. Plus, it's on Netflix right now, waiting to be watched in the dead of night as it should be. 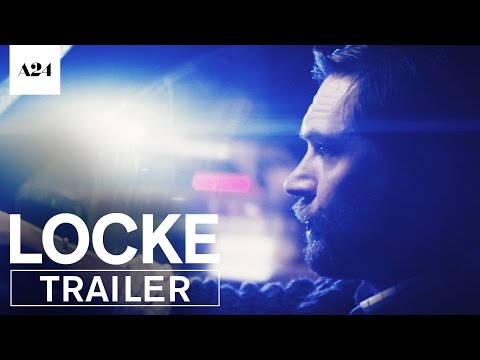 I know it's easy to sleep on Locke because I shamefully did it for years, shrugging the movie off on its initial release as a fussy-sounding experiment, like that gimmicky movie where Ryan Reynolds got buried alive. These super-simple, pared-down story ideas can become ponderous very quickly. Often, these movies run out of gas as they attempt to pile on convoluted plot contrivances, tedious suspense beats, and dopey twists to keep the protagonist in one setting as demanded by the single-location premise. You can feel the gears shifting the whole time.

But Locke, which works as a movie and not as a piece of filmed theater, is not just a writing exercise for a precocious screenwriter or an acting showcase for an endearingly eccentric star. (I mean, yes, it is a chance for Hardy to do a killer Welsh accent, but he doesn't go off the deep-end with the tics here like he does in the Knight-produced FX series Taboo.) No, Locke is a rich text, an oddly relaxing drama that can be looked at from a few different angles.

Here are four ways to think about Locke:

1. It's a concrete movie. Laced with hyper-specific construction terminology and discussions about the bureaucratic hell of acquiring road-closure permits, Locke is the best movie about concrete ever made. (Sorry, Dragged Across Concrete, which has very little concrete-specific content.) Though he's no one's idea of a healthy work-life balance poster boy, Ivan Locke is a man of strong ideals with an unwavering commitment to urban development and city-planning. Even after he gets fired from his job for driving to London, he stays on the phone with a lower-level employee (played by breakout Fleabag starAndrew Scott) because he believes in the symbolic power and metaphoric potency of tall-buildings. It's less of an ego-driven, Trump-like obsession and more of a selfless commitment to seeing a task through to its conclusion. Locke gets the job done.

2. It's a "night bus" movie. In the early 2010s, music message boards were briefly abuzz with discussions of an emerging micro-genre referred to as "night bus," which was named after a Burial track that evoked the rainy, contemplative mood of traveling in the UK late at night. In 2015, a Pitchfork review of a CFCF album described "night bus" as "midtempo, minimalist post-dubstep -- trip-hop." Though it's not about public transportation, Locke is an intriguing visual representation of the nebulous, hard-to-pin-down "night bus" aesthetic. Despite the rising stakes of the plot, there's an almost ASMR-like quality to Hardy's vocal delivery and the gold-ish lighting in the car evokes the hazy ambiance of a soothing drive. (Important distinction: Locke is also a "car movie" and not a "road movie.")

3. It's a fatherhood movie. From Serenity to Taboo to 2007's David Cronenberg-directed gangster drama Eastern Promises, Steven Knight's work is consumed with questions about filial responsibility. In his dealings with his wife (voiced by The Affair's Ruth Wilson), his two sons (the voices of Bill Milner and future-Spider-man Tom Holland), and the woman he had a brief affair with (the voice of The Favourite's Olivia Colman), Locke must constantly wrestle with his diverging commitments to his growing family unit. How can he remain a good father to his teenage children while also caring for his about-to-be-born son? Can he still be loyal to his wife after betraying her by being unfaithful? Will he care for the vulnerable and lonely mother of his new child without making false promises to her about his own feelings? Heavy stuff!

4. It's a Venom movie. OK, so Locke also works really well if you think of it as a part of the Expanded Venom universe. Ivan Locke doesn't sound like journalist-turned-crime-fighter Eddie Brock, the main character of Hardy's 2018 comic book blockbuster Venom, but he's at war with himself in a similar way. He's constantly being pulled in different directions; he's always fighting his darkest impulses and most base desires; he talks to himself all the time. Also, the presence of Holland as his son has to mean something, right? Locke works as Venom prequel and I can't be convinced otherwise.

Equipped with these four ways of seeing Locke, you are now ready to enjoy the movie at your leisure. Unlike Serenity, it's not a movie to watch with friends; instead, I recommend watching it alone late at night, possibly during a thunderstorm, to achieve the optimal viewing experience. If you don't immediately click with the film's ruminative mood or its slow-build pacing, give it some time. Like concrete itself, Locke takes time to settle. By the end, you'll realize the movie is perhaps sturdier than it appears.