When Does 'Loki' Take Place in the MCU Timeline?

If you're confused about where the Disney+ show picks up, here's a refresher.

Given how long it's been since Avengers: Endgame, you may not remember where every Marvel Cinematic Universe character's storyline left off, especially if that hero died prior to the Thanos snap and returned in some form due to time travel. This applies to Loki, Tom Hiddleston's adored Asgardian baddie, who is now the protagonist of a Disney+ series from showrunner Michael Waldron and director Kate Herron. Just like you may have wondered initially while watching WandaVision, you may be asking yourself, "How is this possible?"

In the show, the pompous trickster teams up with Mobius (Owen Wilson), a Josta-drinking agent of the Time Variance Authority, an organization dead set on maintaining a mandated correct order of time. Together, Loki and Mobius are the Riggs and Murtaugh–style odd cop couple tasked with stopping a shrouded, time-hopping figure who's been creating disturbances across history. Confused? Here's everything you need to know about when Loki takes place in relation to other stories in the franchise, and how it might connect with future MCU movies.

As if anyone is really dead in the MCU! But, yes, Loki did die in the opening minutes of Infinity War, in a last ditch heroic effort to stop Thanos' plans. If you'll recall, our trickster pledges loyalty to Thanos before trying to stab the Titan in the throat, but Thanos sees through his bluff and strangles him. It's a brutal fate that shocked audiences when the movie premiered. But, naturally, Marvel couldn't quit a fan favorite like Hiddleston's Loki (who was initially supposed to make his final MCU appearance in Thor: The Dark World) and brought back a previous incarnation in Endgame when the Avengers traveled through time to thwart Thanos. That version of Loki, who picked up the Tesseract and vanished, is one we follow in Loki. 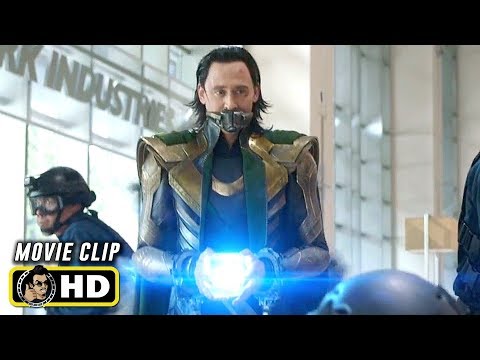 So, where does Loki fit into the MCU timeline?

Episode 1 establishes that the series takes place directly after the scene involving Loki in Avengers: Endgame, but don't take that to mean that the show takes place after the events depicted at the end of Avengers: Endgame. Unlike WandaVision and The Falcon and the Winter Soldier, Loki is not a series that reckons with the Thanos snap, the blip, and the events that followed. That's because the Endgame scene in question is set in 2012 during the Battle of New York that's highlighted in the first Avengers movie.

In Endgame, the team members who survived the Thanos snap devised a plan to hop back through time in order to grab the Infinity Stones before the big purple bad guy can get them. One group heads back to 2012 on a mission to steal the Mind Stone found in Loki's staff, the Time Stone that Tilda Swinton's the Ancient One possessed at that time, and the Space Stone from the Tesseract, which Loki has been using to sic the Chitauri on Manhattan. They get the first two, but in the fracas to accomplish the third part of the time heist, Loki spots the Tesseract rolling away, picks it up, and vanishes. But where'd he go? That's precisely what Loki answers out of the gate: Still in 2012, he's been zapped away to the Gobi Desert, Mongolia.

What does that mean for Loki, the character?

In his three film appearances that follow The Avengers—we're not counting Endgame, where he only appears in the "past"—Loki evolved from beloved villain into beloved antihero. By the time he's being strangled by Thanos in Infinity War, sacrificing himself for the good of the universe, he has earned the begrudging trust of his adoptive brother Thor, who he fought alongside in Thor: Ragnarok. Sure, there's your traditional sibling animosity, but, basically, Loki is a good guy.

It's crucial to understand that the more evolved Loki isn't who we're tracking in the show. This Loki in Loki is the one we knew in The Avengers, who thinks he is "burdened with glorious purpose," the one with designs for planetary domination and who thinks human beings are servants to his will.

"The great opportunity of the show was, there was that version of Loki that lived and then died at the hands of Thanos who had his own, I would say, complete quasi-redemptive arc," explained Waldron in an interview with Thrillist. "We have a different version of Loki—a guy who's still perhaps at his most arch, coming off of this defeat in the first Avengers. He's desperate and he's pissed off and a little bit humiliated. It was really important to all of us that we tell an entirely new story. That we break new ground with this character and do something entirely different. So I was glad to have perhaps a more moldable clay form of Loki in that 2012 version."

When does Loki take place?

After a very brief attempt to rule Mongolia, Loki is apprehended by agents of the Time Variance Authority, an institution with the sole purpose of ensuring that the one sacred timeline doesn't branch off into a chaotic multiverse. Essentially, Loki, having benefitted from a time-travel accident, is not supposed to be in Mongolia in 2012, and is labeled a variant, a.k.a. something the TVA needs to correct. The agents zap Loki to their headquarters, which exist in a sort of liminal space, where time moves differently.

When he's walking the brutalist halls of the TVA, it's unclear precisely when that's taking place, although we do know that Mobius and other agents, and eventually Loki, have the ability to hop around through time to eliminate other variants from pushing the sacred timeline off course. In the first two episodes, they stop in 16th century France, 19th century Oklahoma, 1980s Wisconsin, and other points in time. But it's still important to remember that this is the Loki plucked directly out of 2012's The Avengers. You can bet that more revelations about how this Loki and the TVA will tie back in with the larger MCU will be part of future episodes.