A Brief History of 'Looks Like Meat's Back on the Menu, Boys!' From 'The Two Towers'

In the 20 years since Peter Jackson's adaptation of the The Lord of the Rings trilogy kicked off, the movies have provided fodder for memes time and time again. From "One does not simply walk into Mordor" to "Cast it into the fire...destroy it," the list of ways the franchise's scenes, characters and dialogue have been repurposed by fans is longer than the Endless Stair. But one line of dialogue that has been lovingly embraced by the internet still perplexes all these years later.

The quote comes in a scene near the beginning of The Two Towers, the franchise's second installment, released in 2002. Frodo's hobbit friends Merry and Pippin have been captured by an army of orcs and the enhanced orc leaders known as the Uruk-hai, who believe the two halflings are in possession of the One Ring. It's nightfall on the edges of the Fangorn Forest and the villainous creatures are hungry. An orc named Snaga suggests eating the hobbits. "What about them?" he sneers. "They're fresh." This leads Ugluk, an Uruk-hai overlord, to declare that their prisoners are not for eating. Another hangry orc, Grishnakh, proposes maiming the hobbits instead. "They don't need those," he says. But when Snaga pushes it by moving in to murder Merry and Pippin, Ugluk lops off the orc's head and issues a triumphant bellow: "Looks like meat's back on the menu, boys!"

That line has confounded and delighted fans ever since the movie's release, with a good number of tweets and Reddit comments centering on its seeming anachronisms. "Not only is it out of place, it doesn't even make sense!" complained one confused commenter. "How do orcs even know what a menu is? Do they have fancy restaurants in Mordor? I guess they must." It's a fair point: Why would an Uruk-hai, born from the slime of Isengard, have learned about the concept of a menu? To get to the bottom of this age-old mystery, I talked with the three actors driving this scene [editor's note: requests to Jackson and his co-writers Fran Walsh and Philippa Boyens went unanswered]: Jed Brophy, who played over-stepping Snaga; Stephen Ure, who played jonesing Grishnakh; and, via email, Nathaniel Lees, who uttered the immortal line as Ugluk.

ALSO READ: The 100 best movie quotes of the 21st century 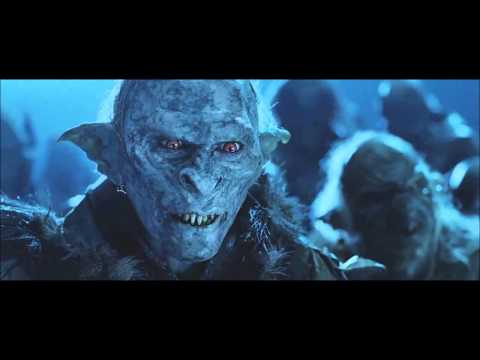 Stephen Ure and Jed Brophy each played multiple roles over the course of the trilogy, and even came back for The Hobbit movies. Ure, who played a different orc in The Fellowship of the Ring, once accidentally whipped the late, great Christopher Lee in the face. Brophy, who has worked with Jackson since the beginning of his career and played a Ringwraith in Fellowship, does double-duty in the Two Towers scene in question, as he also portrays one of the Rohirrim who bust up the orcs' cannibalistic feast.

Stephen Ure: We hadn't been given much of a brief. Nobody really knew what they were doing back then. The casting director said, "How do you see these creatures?" Like everybody else I read the books as a teenager, we all did, and I said, oddly enough, "I always have seen them as being naked." I just didn't see them having any clothes on it. She said, "Well, if you want to, keep your boxer shorts on, of course." So I took all my clothes off, and I just felt freer and my body felt easier to move like that. I'm sure that's what maybe caught their eye.

Jed Brophy: My history with Peter Jackson goes back to 1991, when I did a movie called Braindead. It's called Dead Alive in the States. I was shooting a little short film and got a call asking if I would be a part of the radio plays they were putting together to go and pitch the [Lord of the Rings] films. I played various characters: Frodo, Legolas... I took a play to the Edinburgh Festival and while I was away the film got greenlit. I was in the UK at the time and got an email from Richard Taylor saying, "Hey, the film Lord of the Rings has been greenlit, we would really like to cast you as various creatures in this thing. You need to get on a plane and come back home." So I did. And walked up to Weta and they did headcasts. I didn't really do an audition for them. It was just my involvement of having done prosthetics in the past. They wanted to use people that they knew could bring characters to life through quite heavy rubber.

Ure: That Grishnakh character, if I wasn't working my face underneath trying to push through all the makeup, when I was just in resting bitchface mode, he looked very sad. He looked very forlorn. People kept coming up to me, going, "You okay? Can I get you something?" I went, "Yeah, I'm fine, just leave me alone." "You just look like you're a bit bummed out."

Brophy: There was a general discussion with Peter about how they've been twisted. Originally, they were elves. They were hoodwinked mostly by Melkor and chemically changed or changed through black magic or whatever. They probably don't have a lot of the remnants of that left in them. Their agenda is to try and find food wherever possible. The whole tongue thing [I did] was that the teeth were quite sharp and I was trying that out and Peter saw me doing the tongue and said, "That's cool. He's a bit like a lizard." So I went, "Okay, that's a great template." You always look for a hook in any kind of creature that you're playing. With Snaga, it was just he just wants any kind of incidental food or scraps of clothing they can find. They are kind of scavengers really but also opportunists. They are totally beaten down by their overlord and any kind of joy they can find for themselves, they will find. The cockney thing just came out of that there are various English dialects in Middle Earth and this was an idea that Peter and Fran came up with that they were more Cockney.

Nathaniel Lees: [Ugluk] was the Uruk-hai captain sent to lead the troops in the capture of the hobbits. Did not suffer fools gladly. Very strong leader and presence.

The sequence was filmed on a soundstage over about four or five days, according to Brophy.

Lees: It was fun to do. There were a lot of us Uruk-hai and several orcs and two hobbits. It was shot in a large soundstage. The fight scenes gave us a chance to get quite active.

Brophy: Your theater training comes in where you're having to manufacture the idea that there's a forest there to begin with. There were no Rohan there. That didn't happen until later on. You have to manufacture that kind of surprise and imagine there are a group of horses coming toward you.

Ure: As Grishnakh, we were just in between shots, and I suddenly lost my swallow mechanism. That made me a bit panicky and then I sort of hyperventilated a little bit. The more the panic is coming the worst that it is. I'd never really experienced a panic like that. I was maybe three seconds away from ripping the face off so I could breathe, I thought I couldn't breathe. No one can tell because I'm under all that stuff. Suddenly, I just could swallow again. Nobody knew anything. That was my own little episode. I was completely freaked out for a minute. That could have been terrible. If I had ripped that face off then that's the day gone. That would have cost tens of thousands of dollars.

Brophy: The morning [when Snaga gets his head chopped off] when they did the prosthetics they actually made the ears droopy. You can actually see that thing where the ears are suddenly down like a dog when they are like, "Oh no, I've done something wrong…" They had a fake sword that came down. They stopped it on the neck and then they took me out and put the dummy there.

Ure: At the wrap party for Lord of the Rings, I'd been working on all three films, and I knew people, I found myself just standing there in the corner alone because nobody knew who I was. At the time it took four and half hours to put the makeup on. I'd have to go in at 2 a.m. By the time I was halfway through at half past five when people started arriving, I was already unrecognizable.

The three actors share their takes about the meaning of "Looks like meat's back on the menu, boys!"

Lees: Firstly, Ugluk was Uruk-hai and considered himself and his troops above the orcs. "Menu" is merely the choice of food available. Once I had beheaded the orc [Snaga], "meat was back on the menu."

Ure: There's a lot of stuff that doesn't really make sense. Of course they wouldn't know what a menu was. You're not going to start debating the writing, because maybe then they are going to run away and rewrite it and then you are going to be sitting there in all that stuff. Really, at the end of the day, you just want it to be over and get out of that stuff. I had no idea that this scene had become so famous. There's a lot of clunky things in there. It's Philippa Boyens. She puts all this stuff in there that doesn't make sense. She was taken on board because she was the Tolkien expert. I can tell the lines that Philippa wrote. Like in the third film where I'm playing Gorbag, and when I finally come up from the big orc fight that starts over the Mithril vest, and I'm going to kill Elijah [Wood as Frodo], and say, "I'm going to bleed you like a stuck pig."

Brophy: There is that modern vernacular that slips into [the script.] I never thought about that until you mentioned it. I guess when you look at Bilbo Baggins and the types of food he eats. They do talk about banquets, especially in Hobbiton. So "menu" [could] be a common phrase. The Uruk-hai are orcs bred with humans, so who knows where that language comes from, really?

Lees: The Uruk-hai had only one purpose, to capture the hobbits and return them to Sauron. They were not sly or devious in that sense, contrary to the orcs who were more along the snake path. So for Ugluk to put an end to the orcs' snivelling and whining in such a decisive manner, and to offer them up to the troops, seemed like instant justice being served.

Brophy: Pete has a wicked sense of humor. This is a moment where we could relate to them as a group of people, but they also have their own distinct kind of society going on, the way that they relate to each other.

Brophy: When it came to doing the ADR, the dialogue replacement, they were in the UK and the film was going to be out in a couple of days and they had just finished doing some work with Andy [Serkis] on Gollum, and we were still stuck in New Zealand, and they suddenly realized they hadn't done ADR for those characters [in the Fangorn Forest]. So I got a phone call where I did the guide track of the character for Andy and he mimicked that. It's actually him doing my voice. I think all the characters in that scene might be Andy. That's the story I've been told.