Once upon a time, the Devil went to New York City.

One of the best things -- if not the best thing -- about Netflix's Lucifer, the show about the Devil skipping out on Hell and becoming a nightclub-owner-cum-detective in modern-day Los Angeles, is how swiftly and gamely the show became fanfiction of itself. This is not criticism, not in the slightest. Even when the show stuck more steadfastly to its police procedural roots on its original home network Fox, it made it its business to have a little bit of fun with itself every season, name-dropping "Deckerstar," the popular ship name amongst the fans, and letting each character have a few self-aware moments in which they reflect on how ludicrous the whole concept actually is. Lucifer even wrote a song about it.

Things got even more conceptual when the show migrated to Netflix for its fourth season, inviting in more lore in the form of a reborn Eve and a cultish priest bent on annihilating evil from the Earth, an ongoing subplot involving a half-angel baby, and Chloe, Lucifer's partner in crime-solving, finally saying the L-word. The first half of an expanded Season 5, which debuts on August 21, is perhaps the most well-rounded set of episodes in the show. It adds another new nefarious character, Lucifer's twin brother Michael, into the mix to spend a few episodes plotting, before a final clash in the mid-season finale that leads to a pretty crazy cliffhanger. It's great! With more episodes to work with, the show can play around a little bit in the meantime, allowing leeway for minor detours like the film noir-inspired episode 4, "It Never Ends Well for the Chicken," possibly the best thing the show has ever done. 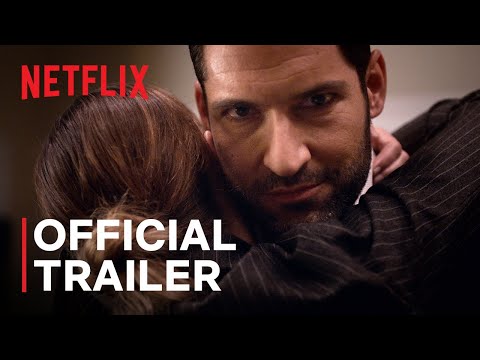 The episode begins in the present day, with Chloe's daughter Trixie appearing in Lucifer's penthouse for their regularly scheduled board game night. Except, Chloe doesn't arrive with her, and Monopoly's no fun with just two people, so Trixie requests a story time instead. After some hemming and hawing, Lucifer agrees to tell her the tale behind his black stone ring, which he's worn for the whole show but hasn't been explained until now. As it happens, he acquired it from Lilith, the mother of his demon army (including Lucifer's bodyguard Mazikeen), in the New York City of the mid-1940s, where crime was rampant, murder was bloody, and everyone wanted to live forever.

As he tells the story, we cut back and forth, Princess Bride-style, between the present day and the past, as Trixie routinely interrupts to make sure she's keeping the plot straight. Lucifer casts his own buddies as the characters in his story: Maze (Lesley-Ann Brandt) plays her mother Lilith, an immortal being from the dawn of Time moonlighting as a sultry chanteuse in a seedy club; LAPD forensic analyst Ella (Aimee Garcia) does a hysterical Brando imitation as dangerous gangster Tony Stompanato; Chloe's ex Dan (Kevin Alejandro), whom Lucifer routinely refers to as "Detective Douche," is the simpering socialite William Kincannon, aka Willy the Sausage Prince (yikes); Lucifer's therapist Linda (Rachael Harris) is the all-knowing bartender Gertie; and Chloe herself (Lauren German) is Detective Jack Monroe, donning a man's suit and a Humphrey Bogart drawl.

"The fun of it is who Lucifer chooses to be who, and what that says about how he sees them," co-showrunner Joe Henderson told Entertainment Weekly in a preview of the episode. It's neat to see, then, how Lucifer puts Chloe's crime solving chops first, as opposed to just letting her play another love interest -- the two share merely a friendly chemistry in this episode. Obviously, Lucifer continues to think very little of Dan.

The episode also functions as a kind of origin story, not for Lucifer necessarily, whose origins have been ingrained in pop culture for thousands of years, but for Lucifer the detective, as the little mystery this episode focuses on functions as his first ever case. You can tell from minute one how much fun everyone is having with it, from the writers to the actors themselves, positively feasting on lines like, "This is a pretty rough joint." Harris, with her towering bleach-blonde bouffant wig and cat-eye glasses, fits into the scene possibly the best of all.

Brandt, though, steals the show with an incredible Eartha Kitt impression, and gets not one, but two songs to belt. (This show is ripe for its upcoming musical episode.) And the black-and-white isn't just some throwaway gimmick: You can tell the creators have done a lot to make it even feel like a classic detective movie, dramatically lighting scenes and using cameras on cranes and sweeping dolly shots that don't appear in the rest of the show. Even the mismatched green-screen out the windows of the car feels true to the era.

Though it's Lucifer's stage, this also functions as a Maze episode, exploring her relationship (or, rather, non-relationship) with her mother through Lilith's own disdain for earthly attachments. Maze's evolution on the show allows for some of its best moments, and Lucifer's stalwart refusal to allow Maze to become a one-dimensional background character is both strong and empathetic storytelling.

Lucifer, though it involves murder, hatred, and cosmic battles of good against evil, is remarkably kind to its characters, and by extension its fans, whom the show has spoken to directly since pretty much day one. As well it should, since a notably loud fan campaign saved it from being canceled for good -- Netflix even titled one of its Season 4 episodes "Save Lucifer," after the fans' trending hashtag. Season 5, expanded to 16 episodes (the first 8 of which are now available), gives the show some breathing room, which allows for more irreverent episodes like this to explore their own mythology. And, well, thank God for that.