The film features never-before-seen footage from a secret show in the rapper's hometown of Chicago.

Chance the Rapper’s Magnificent Coloring World crashed into AMC Theatres across the country this weekend, and it’s important to put the sheer magnitude of the award-winning rapper’s latest achievement into perspective. Unlike recent and acclaimed concert films like Beyonce’s Homecoming and Taylor Swift’s Folklore: The Long Pond Studio Sessions, Magnificent Coloring World isn’t a streaming exclusive, which is all the more impressive considering that Chance the Rapper is an independent hip-hop artist.

With it being a true theatrical release, Magnificent Coloring World was framed as a special experience from the jump, and it’s safe to say that it lives up to the high standards that it set for itself.

Part documentary, part concert film, Chance the Rapper’s AMC-exclusive kicks is essentially a time capsule that contains stunning HD footage from a secret concert held in Chicago, soon after Chance’s historic Grammy wins in 2017. A brief documentary opens the film, and with the help of his close collaborators—from Peter CottonTale to Nico Segal—and other Chicago-based music industry insiders, Chance the Rapper prefaces his top-secret show with the story of his awe-inspiring rise in 2016.

If you’ve never heard of the artist known for 10 Day, Acid Rap, Coloring Book, and The Big Day, you may find the opening stretch of Magnificent Coloring World interesting, as it touches on how the birth of Chance’s first child as well as his faith inspired his classic Coloring Book mixtape. However, other than a well-crafted scene of Chance the Rapper explaining the importance of sound, there’s nothing too insightful or interesting that’s revealed during the documentary, especially for viewers who have been closely following the Chicago rapper’s journey since the early 2010s. 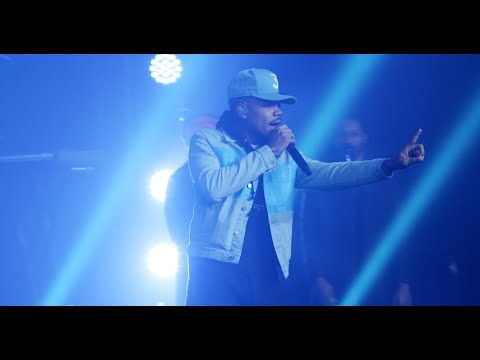 That being said, the real show begins when Magnificent Coloring World quickly—and a bit unceremoniously—transitions into the concert section of the film. Once Chance starts playing “Same Drugs” alongside his giant singing muppet, it’s hard not to feel compelled by his well-executed performance. As the show progresses, new sections of the seemingly endless stage are revealed one after another, complete with new set designs and performers. This continues as Chance the Rapper runs through the popular tracks from Coloring Book as well as some choice cuts from his other fan-favorite projects.

Magnificent Coloring World is a spectacle, and for a majority of the concert, it feels like you’re slowly making your way through this extraordinary world that Chance the Rapper and the rest of his team have put together. Once the full stage design is revealed in a massive wide shot towards the end of the show, it’s easy to feel that the experience has lost some of its wonder, but it is also pretty cool to see how the crew was able to manipulate the space during filming. Furthermore, the stage design and technology used in Magnificent Coloring World is four years outdated, so for it to still hold a theatre audience’s attention in 2021 is admirable.

The film does have its faults, the most glaring flaw being the opening documentary. The premise of Magnificent Coloring World just wasn’t thoroughly explored prior to the start of the secret concert. In addition to the backstory on Chance’s iconic run as an independent artist in 2016, it would have been great to see more of how the show was actually produced, from how the audience was selected to the inspiration behind the stage design.

With that said, Magnificent Coloring World is by no means marred by its shortcomings. The mistakes the film makes are more so attributed to the concert film genre than Chance’s creative direction, and also, there are two distinct scenes that make you sit back and truly appreciate the experience. One of those moments is when Chance gives an unexpectedly emotional performance in a “Hotline Bling”-esque light box. Assisted by ​​Francis Farewell Starlite, Chance transitions from the bubbly, yet topically harrowing, Coloring Book song “Summer Friends” into the grim and vulnerable Acid Rap classic track “Paranoia.”

Nostalgia can be misleading, and it can also make you spend money on things you probably shouldn’t. But there is beauty in looking to the past. When hearing a medley featuring two drastically different iterations of what some could argue is essentially the same song, it makes you immediately recognize Chance the Rapper’s musical impact over the last decade.

The second moment is when Chance raps “Blessings (Reprise)” and starts bringing the concert to a close. “Kanye's best prodigy/He ain't signed me, but he proud of me,” he raps with all his might, and one can’t help but think back to his mentor’s highly anticipated concert film for his 2013 Yeezus tour. Like many of Kanye West’s creative projects, that concert film never saw the light of day, but here was Chance the Rapper in 2017, performing a solo rendition of “Ultralight Beam” and following his mentor’s footsteps.

While it is undoubtedly entertaining, Magnificent Coloring World flourishes because it is the subtle reminder that we all needed that Chance the Rapper absolutely deserves his flowers.