The director talks about the sweet and salty coming-of-age story that joins a growing chorus of Asian-centered stories.

Marvelous and the Black Hole is a magical film. It beguiles with a mix of sincerity and angst that resonates with the acerbic teen in all of us, the one that’s callused enough to give the middle finger to an unfair world but retains an impressionable capacity to be mesmerized by a clever trick.

Writer/director Kate Tsang’s debut feature—out in select theaters April 22 and on VOD April 29—tells the story of Sammy (Miya Cech), a razor-edged adolescent acting out in the wake of her mother’s death. Her father, Angus (Leonardo Nam), is running out of options to get Sammy under control. Her last chance to avoid bad-kid bootcamp is to complete a course at the local community college. Sammy’s attempt to eschew her classwork draws her to Margot (Rhea Perlman), an unfiltered but enchanting magician who helps Sammy channel her raw, frustrated energy into the art of illusion and storytelling.

Its release is a wonder of its own, overcoming a treacherous series of misfortune including a recast of a principal character with 24-hours notice and navigating the perilous and uncharted waters of pandemic-era film festivals. “Every step has been unexpected,” said Tsang but her film’s miraculous journey led it to a serendipitous moment. Tsang crafts a personal and stylish story about an Asian-American family working through a universal sorrow. Acrimonious troublemaker Sammy joins an encouraging swell of empowered Asian females on screen, including Turning Red's animorphing Mai Ling and Everything Everywhere All At Once's verse-hopping Evelyn Wang. It sadly also comes at a time of increased violence toward the AAPI community. Thrillist spoke with Tsang about the rise of Asian representation, Beetlejuice, and a sweet but stinky fruit. 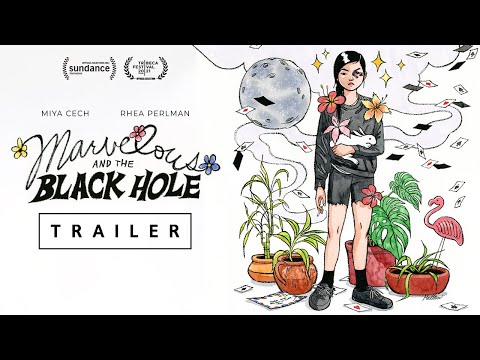 Thrillist: Marvelous is part of a trio of films this year, along with Turning Red and Everything Everywhere All at Once, that are centered on empowered Asian female protagonists whose identity isn’t completely westernized. Shows like Pen15 also helped give a platform to the ways a lot of us grew up with both Western and Asian cultures. Do you think we're at an inflection point where we're going to see more of these stories on screen?
Kate Tsang: Oh my gosh, I hope this is just the beginning. I've been so fed with all those films. I just love that it's exploring so many different kinds of stories that just happen to have Asian-American families but identity isn't the story crux and that's so exciting to me. It's been decades in the making.

There's lots of people behind the scenes who've been making their films in the indie scene, lots Asian-American film festivals that have been pushing filmmakers, outlets like Angry Asian Man and reporters are championing stories. Finally people are getting to a certain stage that they're actually able to make the films that they've always wanted to make. I would say, those people are probably people like me in their 30s, who have had their nose to the grindstone and are finally getting chances to break through and actually tell stories.

In our lifetimes, Asian-American representation in film has kind of been all over the place. Much of what we were presented with growing up were these shallow, token Asian characters. If there was any allusion to Asian culture, it's used as a punchline about how weird it is or something like that. Sammy is a very American teenager but you don't shy away from including aspects of Chinese culture. How important was that for you to incorporate in the story, where it’s part of Sammy's identity but not integral to this young teenager’s life?
Tsang: What she's battling against is not like, “Who am I?” “What am I?” which are definitely questions I had growing up. She's tackling something that I feel is much more universal, which is loss, something everybody struggles with at some point in their life. For me, that was the loss of my family unit, as I knew it. And since I grew up in the US and Hong Kong, the way I see the world, the images and visuals I'm interested in, are a mix and meld of the two. I wanted Sammy’s world to reflect that as well because growing up, I didn't only watch American TV. I would watch soap operas with my mom and, like, Stephen Chow movies. So I wanted that kind of intermingling to happen in this film.

Marvelous is coming out at a troubling time for the Asian-American Pacific Islander community. There were the Atlanta shootings last march, in New York City there's been a spike in hate crimes against Asian-Americans, the actor Karen Fukuhara was assaulted in a racially-motivated attack less than a month ago. You’ve said you wanted to make something that Asian-Americans would feel in their bones, which is something I love and I think you accomplish. What do you want those in the Asian community to take away from your film?
Tsang: I want them to see that they're so loved and appreciated. Sammy, to me, is an important character because she is so flawed and so prickly. And if the audience can feel that she's deserving of love, of their empathy, I hope that they can feel that as well. Like, it's okay to be this way. This is also what I felt from Everything Everywhere All at Once. I just felt so loved by the filmmakers and that's what I want my films to do, as well.

This story is not inherently about racism but there's a moment that struck me each time I watched it. It's when Sammy begins to research magic and she finds a chapter titled "Oriental Magic." It describes adopting this antiquated Far East caricature to add mystique to an act. It’s a pointed reference to racism, specifically an instance that's part of the history of performing magic. Can you tell me about including that moment?
Tsang: When I was doing research for the film, I didn't really know much about sleight of hand magic other than I loved it as a storytelling device. So I had to dive in and start figuring out what this world was about. I was reading books about it and taking lessons.

There's tricks that just have the most awful names that I'm not going to repeat here, but like, there's just some really racist naming of certain magic tricks. It's something that really bothered me because here was an art form that I was getting really into, that I loved. But at the same time, every time I'd pick up a book, I'd feel sort of pushed back. Like "Oh, I don't know if I'm welcome here, necessarily." I love magic and what it can do, and I didn't want to gloss over the fact that this is a real thing. That if you want to get into magic as a person of color, you're going to encounter these kinds of messed up historical things that are still kind of prevalent.

For me, it's not the magic that's bad. Magic is art. Art is available to anybody who wants to pursue it. Maybe it's the way this book is showing, like their telling of it is not for you. You know, like written with Sammy in mind. And I didn't want a character to be like, "Because this book necessarily doesn't have me in mind, I'm not going to do it." This is something that interests her. She's going to do it no matter what.

One of the aspects of the film that stands out is its style. You have this great crafting throughout the film and these surreal sequences and really delightful production design that reminds me of Michel Gondry. You have these fantasy sequences that are Sam Raimi inspired, with all of this gushing blood. And there are these wonderful wuxia sequences. Tell me about some of the touch points that you and your team had in mind when you were making those creative decisions for how this was going to look and feel.
Tsang: Yong Ok Lee was our production designer and she's phenomenal. She production designed The Farewell and Minari. She takes your ideas and elevates them. Nanu Segal, who was our DP, the references I brought her were like Lydia's bedroom from Beetlejuice, just really cave-like and dark and solitary. Also moments from Hunt for the Wilderpeople because I also loved that they could take normal looking settings, like inside the house, but turn them into really beautiful, sort of like lightly heightened spaces, even though they're really familiar. That's the kind of feeling we wanted. A lot of the stuff inside the house we wanted to feel more cold because the family was so distant from each other, and then as she meets Margo we wanted to start warming things up and bring more colors into the end when it's much more saturated.

Our costume designer Amanda Bujak and I have worked together on all of my projects since film school and she’s a huge part of why the actors look so good. It was Amanda’s idea to paint flowers on Margot’s boots and keep that theme going throughout Margot’s wardrobe. We had a super limited budget so Amanda went thrift and vintage shopping, something she thought Margot would’ve done herself, to build Margot’s eclectic wardrobe.

Miya does such a wonderful job as Sammy. She's relatable because she's a punk girl without being a punk. She has an edge and attitude, but she's not a stereotype. How did you develop that character with her and were there any models for her look or her attitude?
Tsang: Well of course, Lydia Deetz who is like my forever love. But also Hellen Jo, this illustrator who's just amazing. I remember seeing her illustrations of these really angry Asian teens years ago, and it like blew my mind. When I started writing, Sammy, I had her illustrations in the back of my mind. I wanted to model her after my younger self as well, who was sort of gothy and a little punk, but did not have means to go and buy all the accoutrements, and also I wanted to just be my own version of it. So I wanted Sammy to distinctly have her own goth vibe.

You have the moon and you have rabbits. They're alluded to several times throughout the film. You've said this is sort of Chinese 101. Can you elaborate on that?
Tsang: Growing up, you celebrate the autumn festival, which is all about the moon, and also Lunar New Year. So I heard a lot of the Chinese fables and the legends of the rabbit on the moon, or the woman on the moon. I wanted to incorporate that into what Sammy would have heard from her mother, because I remember my mom would tell me a lot of stories.

One particular instance that was really burned into my mind is that I remember as a kid looking out of the car window and being like, “Why is the moon everywhere I look?” She just said that the moon was following me because I was a really good kid and it was looking out for me. So I wanted to incorporate part of that sentiment into it as well.

What is Kate Tsang’s relationship to the durian? Which side are you on, Angus or Sammy’s mom?
Tsang: The durian thing is actually inspired by my dad. Like, my dad hates durians, absolutely hates them, but my grandma really loves them. I’m a fan, but it’s hard to find a fresh one.

Kent M. Wilhelm is a James Bond-obsessed freelance multimedia film journalist based in NYC. Follow him on Twitter @kw_hc.