Matthew McConaughey Tricks Strangers in L.A. Into Thinking They're High 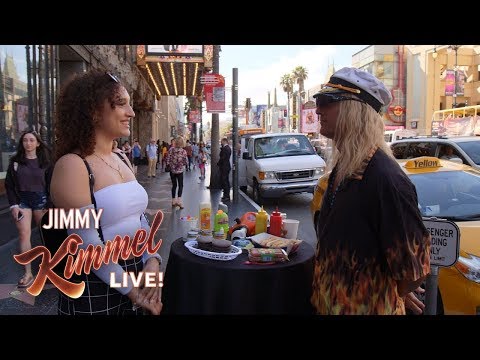 Matthew McConaughey has entered the phase of his career at which it's virtually impossible to separate the actor from his characters. The man who pronounces "bourbon" like he's actually savoring each letter, the guy who's played everyone from Rust Cohle to Baker Dill, the only person who can reasonably have his name turned into a portmanteau referencing the Renaissance, appears as a blissed-out, perpetually high poet named Moondog in Harmony Korine's latest film, The Beach Bum.

Since Moondog already seems to be a hit with fans, Jimmy Kimmel Live decided to put the character's pseudo-mystical powers to the test by having him hand out "weed-infused" treats to strangers walking through Hollywood in a segment called "High Witness News." These items may not have contained any actual marijuana, but that didn't stop people from claiming they felt the high kicking in almost immediately.

McConaughey's Moondog, as you might expect, has the perfect responses to keep the illusory high going strong. "Your legs are gummybearing? That's good," he tells a woman who says her legs are like gummy bears. He also blows bubbles into the face of a man who's suddenly very chill. It's all very funny and even features a cameo from Snoop Dogg, McConaughey's co-star in The Beach Bum.

On the one hand, you might say these people are clearly deceiving themselves; but on the other, it's entirely possible that the presence of McConaughey/Moondog can in fact create a state similar to a marijuana high.