As President Obama delivered his final State of the Union address, reminding Americans that their "troops are the finest fighting force in the history of the world," I sat in a Times Square theater watching a Benghazi attack docudrama from the director of Transformers: Revenge of the Fallen. That's some #America, right there.

13 Hours: The Secret Soldiers of Benghazi is a Rorschach test for your political philosophy. The ripped-from-the-headlines action movie is about all-American badasses saving Harvard-educated CIA geeks from a mess of their own design. There are shootouts, tactical ops, and many explosions -- the DNA of summer blockbusters infecting winter, courtesy of boom-master Michael Bay. But in this case, the events all really happened, an overshadowing fact that turns 13 Hours into electric propaganda.

But is it a great time at the movies? Depends on the ink blot. 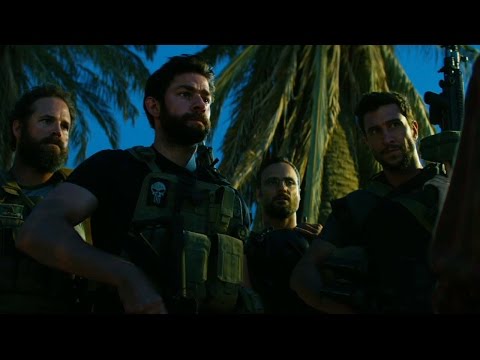 Real talk: 13 Hours isn't, and could never be, apolitical

Along with the SOTU coincidence, my 13 Hours viewing experience was enveloped by the investigations, damnations, court hearings, and everything else that's happened in Washington since the 2012 Benghazi attack. It's impossible to evade.

In case you missed the last three years of newspapers: in the late evening on September 11th, 2012, just a year after the liberation of Libya, a faction of local militants stormed an American compound in Benghazi. The violence resulted in the death of two men, including US Ambassador J. Christopher Stevens. This was followed by a second attack, targeting a covert CIA base. A security detail on the base warded off waves of AK-47-toting adversaries until dawn. Fast-forward to today, and "Benghazi" is a catch-all for Democratic failure and Conservative conspiracy.

Adapting Boston University professor Mitchell Zuckoff's heavily researched account of the same name, 13 Hours is determined to cut through BS to tell a story of bravery. Bay casts an array of bearded, charismatic Xerox dudes -- including James Badge Dale (Iron Man 3), John Krasinski (The Office), and Pablo Schreiber (aka Pornstache on Orange Is the New Black) -- who cobble together camaraderie and humanize the terror. When the mundanity of security work implodes into a firefight, the Bay we know and occasionally love goes to work.

But embedded into every line, every step, is Conservative catnip. 13 Hours juxtaposes shots of the White House with the film's repeated mantra: "We don't have any fucking support." The soldiers lambast their CIA spy coworkers until the final moments, because brains alone can't solve world problems (Bay even sends a female agent tripping down a flight of steps to prove a point). 13 Hours remains opaque enough that it can't come under fire for taking a point of view, but Bay plays the politicking like a dogwhistle. A line like, "They're all bad guys until they're not" could speak to the chaos of the soldiers' situation -- with pro-America Libyans intermingled with militants, their telling who was on what side was near impossible -- but it could (and will) provide endless amount of jingoistic rant fodder. Basically, I know which uncles I'm hiding on Facebook when 13 Hours hits theaters.

Agenda or not, 13 Hours is intense

Mythologizing can reduce an act of military bravery to a two-hour Navy SEAL commercial (see: Lone Survivor and American Sniper, where real men become talking action figures). Bay saves 13 Hours from becoming a "message" movie with action proficiency. His shaky camerawork and elaborate choreography, owing more to Black Hawk Down than any of his previous work, drops you into a furious, convoluted battle. We empathize with Dale and Krasinski's righteous defenders because we feel their world imploding. Literally, nearby cars ignite in fireballs, gunfire constantly pops behind them, and when the dust settles, they're stranded in a pitch-black Libyan labyrinth. The same direction that pumps adrenaline through The Rock turns 13 Hours into a horror movie.

And Bay doesn't shy away from the gore; when mortars start dropping on our heroes, blood is shed, limbs are lost. It's sick and tangible and you really, really, really want someone to swoop in and save them. Then one of the macho dudes defies orders, sets out to save the day, and the separation of hero and hero complex blurs without commentary. Bay made a visceral war movie, but war movies can't be this simple.

Heroes are people, too

"I need a bag full of money and a flight to Benghazi," says the leader of Tripoli's backup squad. Yes, 13 Hours is definitely a Michael Bay movie, with dashes of cartoonish comedy -- anyone who isn't a ripped Iraqi vet is a putz, and the one major Libyan character is a total goofball -- rah-rah glory moments, and enough billowing American flags to appease the Ammon Bundy-est patriot.

No one needed Bay to weigh in on Benghazi, a loaded, talked-to-death topic, but it's hard to imagine anyone else getting it this close to right. The director has a relationship with the US military -- they're constantly loaning him helicopters and tanks to blow up in Transformers movies -- and an empathy for the on-the-ground experience. He turned blue-collar drillers into Earth's greatest heroes in Armageddon and he does the same here for men of service. These guys are drawn to the war zone. They only know how to kill. Judge them, root for them, whatever; when they're dodging Molotov cocktails and gunning down faceless militiamen, you feel for them. Ham-fisted scenes of FaceTiming home (that's how phones work now) make it sentimental, but oh well. There's truth there.

And in a movie about Benghazi, an ounce of truth is an accomplishment. I walked out into a post-SOTU America struck by13 Hours' stringent action and how it crosses the objective line; after the skirmish ends, Libyan mothers and sons weeping over the dead bodies of their own soldiers, one of the good guys declares, "This country has to figure its shit out." Is it a joke played for belly laughs or the exhale of a tired warrior? Doesn't matter -- the line, like too many, flops.

13 Hours is a ripe action movie and a messy portrait of American fighters. You, wherever you stand, may not see it that way. And if you're my crazy uncle, you definitely won't see it that way.

Matt Patches is Thrillist’s Entertainment editor. He previously wrote for Grantland, Esquire.com, Vulture, The Hollywood Reporter, and The Guardian. His favorite movie is Groundhog Day. Find him on Twitter: @misterpatches.