How 'Mission: Impossible - Fallout' Pulled Off That Crazy Helicopter Finale

This post contains spoilers for the ending of Mission: Impossible - Fallout.

Before working on Mission: Impossible - Fallout, Tom Cruise and his stunt coordinator, Wade Eastwood, were thinking about going to fly helicopters in New Zealand just for fun. But when you're Cruise, downtime is hard to come by, so they came up with a better idea: They'd write a chopper set piece into the sixth installment of the long-running franchise.

"We looked at action sequences in movies and there was no great helicopter action sequence," Eastwood tells Thrillist over the phone. So he, Cruise, and two-time M:I director Chris McQuarrie went ahead and made one. But first, Cruise needed to get a license to fly one of the damn things.

The invigorating finale of Fallout finds Cruise's Ethan Hunt airborne, quite literally, in the driver's seat of a helicopter chasing after Henry Cavill's villainous August Walker, now revealed to be the anarchic John Lark, in a quest to stop nuclear catastrophe. Cavill's bad guy is in possession of a detonator that is crucial to preventing two bombs from going off and causing tons of deaths, but by the time Ethan has figured out how to save the day, August is already soaring through the mountain ranges of Kashmir. (They filmed in New Zealand.) So Ethan takes to the skies himself. How he even gets up there is a feat of upper body strength.

Now that the movie is topping the box office, Eastwood walked us through the nitty gritty of how the stunning finale came to be.

Eastwood, Cruise, and McQuarrie are collaborators stemming back to 2014's Edge of Tomorrow -- otherwise known as Live Die Repeat -- and inventing the action for something like Fallout is a collaborative process that begins when McQuarrie is working on the screenplay.

Cruise's fascination with helicopters began thanks to the realities of the job. "We're always flying from one place to another because Tom's needed in so many places," Eastwood says. "I would always fly the choppers because I love helicopters and I'm a pilot. Tom is a great pilot, fixed-wing, and he got really into helicopters because they are just cool." That is to say, Cruise probably would have learned to fly regardless of the requirements of the Fallout script -- Eastwood notes that he and Cruise like to dream up daredevil excursions -- but production gave him a tight timeframe in which he had to not only become a proficient pilot, but an advanced one.

Once the idea for the helicopter was in place, Eastwood had to devise how Ethan would get in the cockpit. If he ran on the skids and jumped in, that would tip off Cavill's August too early -- plus, that's old hat. "Running and jumping on the skids of a helicopter has been done in a million movies since the '80s," Eastwood posits. "I didn't want to repeat something." Thus, the idea of the long line came about.

Ethan's madcap run towards the helicopter is comedic. Even his on-screen colleagues are baffled by what he's going to attempt. Once his climb starts, it looks, for a moment, that he's not going to make it as he falls onto the bag below, but, because he's Ethan Hunt, he clings on. For Eastwood, figuring out how to keep Cruise from plummeting to his literal death was yet another logistical challenge. "I had to work out how to drop Tom this distance and catch up and how to help him up if there were emergencies," Eastwood explains. He also had to have all the materials necessary for keeping Cruise safe inside the tight space constraints of the helicopter where he would be stationed, throwing out commands.

Eastwood first tested the stunt in a studio in England with a rope attached to a crane, then added a model chopper to that equation. Eventually he worked it out for real in the New Zealand filming location, making sure the bag lifted off the ground in such a way that it wouldn't cause the entire vehicle to crash and the line would be taut enough so Cruise wouldn't be pulled into the rotor blade. After the system was tested by a stunt double, Cruise was called in. The team started off by dropping him lightly, but ramped up the impact as he got more confident.

"With a stunt double, we hit the bag pretty hard because it's a stunt double and I've got a whole suitcase full of them," Eastwood jokes. "Not really, I don't have a suitcase full of stunt men. But stunt guys are athletes like Tom is, but if a stunt guy gets a bit winded or bruises a rib or something, it's not the end of the world. We're about making it as safe and powerful and impactful as possible to wow the audience. With Tom Cruise, I've got to make it as safe and as powerful and spectacular, but also if he's slightly damaged, we can't shoot anything else." Case in point: production had to shut down when Cruise broke his ankle performing what Eastwood describes as a "smaller" stunt, a leap across two buildings.

Cruise, according to Eastwood, "maintains a very strict physical fitness and physiotherapy and preventative stuff for his body so he's always ready for everything." When an element gets added into his repertoire -- say, something like the rope climb or the much ballyhooed HALO jump earlier in the movie -- Eastwood will devise a program that his trainers can institute that will cater to the parts of the body the stunt requires. (For the rope, it was upper body, shoulder, and finger strength -- yes, finger strength!) But all the training could not prep for the freezing cold of the Southern Alps of New Zealand. They did at least a half dozen takes of the rope stunt.

"It was exhausting," Eastwood says. "At a couple of stages we'd have to put the chopper down in the field in the middle of nowhere in the mountains and just shut down and take a rest. And also warm up."

At one point, the crew was rushing to finishing shooting the moment where Ethan dangles from the netting on the helicopter's cargo. They had just done a take -- but one camera didn't quite get the shot. Eastwood signaled to Cruise to see if he was ready to go again. "To me it looked like he said, 'Yes, let's go again,'" Eastwood says. "To him, he was like, 'I'm absolutely bloody freezing, I'm not sure I can hang on for another one.' So we did two back to back. We landed and he was so cold he was shivering, chattering. He was like, 'Wait, what the hell? Couldn't you see my signal?' I was like, 'Yeah, you were saying yes.' He was like, 'No, I was saying no.' We laugh about it now, but at the time he was like, 'You bastard." 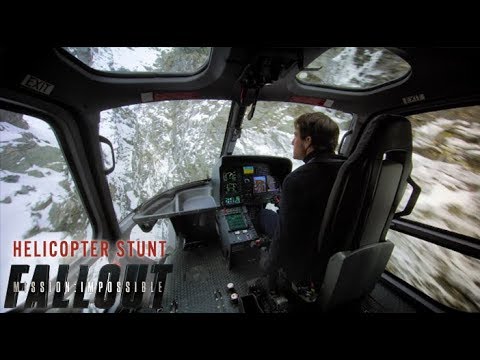 When Ethan finally reaches the cockpit, Cruise takes over flying duties. In a featurette, producer Jake Myers describes how that they developed special camera rigs to show that Cruise himself was really flying.

After securing his commercial license, Cruise needed to get stunt training so he could perform sophisticated maneuvers like downward spirals while acting. "If you let go of the instruments normally on a green screen, you're not going to crash, nothing happens. You let go [and say,] 'sorry, cut, let me do another one,'" Eastwood says. "On this, if you let go of the instruments, you're crashing, you're dead."

The shot lists for the aerial sequences were planned out, but beholden to weather conditions. The shots you see in the film are long takes, without VFX work, and both Ethan and August's helicopters in the sky. Cavill was strapped into his with a professional film pilot operating the controls. "It was literally like a helicopter ballet in the sky with all the choppers and the film choppers and everything," Eastwood adds.

The battle between Ethan and August ends with both men fighting for their lives while hanging off a perilous-looking cliff, which the crew had to go all the way to "the middle of nowhere" in Norway to find. They had just three days to film the material for those crucial final moments in the remote location. "We had to have cabins in case we were trapped there with the weather, the snow, so we could sleep overnight," Eastwood says. "Everyone had an evacuation routine to walk out of a certain area and meet a helicopter at a lower altitude. It was a big mountaineering operation." There were moments, he remembers, where Cruise and Cavill were affixed to the side of the rock in rigs, with a 2,000 foot drop below, and he would lose site of them in fog and rain.

Just as the bombs are supposed to go off, the camera cuts to a shot of Cruise lying on the very edge of the cliff, detonator in hand, mission accomplished. "He was actually doing exactly what you saw, and that was total improv from Tom, too," Eastwood says. "He was just thinking about the scene and he just laid back. I was a couple of feet away from him but in a safer area." It was just as nerve-racking for the people on set as it looks on screen.

"When we cut, I expected him to then obviously get away from the edge a little bit so he could communicate," Eastwood remembers. "He would roll over, 'Hey guys what do you think?' I'm like, 'Yeah, we're good, why don't you just slide away a little bit?' But he would just sit on the edge. He's very comfortable with heights." To say the least.