It's not great, but it will introduce some great tunes to a new generation.

Amy Poehler famously played "not a, like, regular mom," a "cool mom" in Mean Girls. Anyone who can quote that comedy by heart—which is a lot of people—knows that her character was not actually cool. She was a budding Kris Kardashian wannabe in a Juicy sweatsuit. But in Poehler's new Netflix movie Moxie, Poehler plays an actually cool mom, who introduces her daughter to riot grrrl and changes her life. Moxie is by no means a perfect movie, but, hey, if it gets a generation of casual Netflix viewers into Bikini Kill, well, that's a net positive.

Based on a novel by Jennifer Mathieu, Moxie follows Vivian (Hadley Robinson), a quiet teen, who, upon seeing the gender-based injustices going down at her school, decides to start a zine inspired by her mom's collection of relics from the '90s. After surreptitiously placing her photocopied creation in the girls' bathroom, Vivian starts a movement aimed at stopping the rampant harassment on campus led by football star (Patrick Schwarzenegger). Along the way, she has a falling out with her best friend (former Terrace House: Aloha State member Lauren Tsai) and starts dating a cute, supportive boy (Nico Hiraga).

Moxie is ultimately admirable, but flawed. Its nods to intersectionality feel perfunctory, especially given the fact that its narrative centers on a white, cisgender girl. It's got a great cast of supporting performers, including two veterans from the surprisingly great Saved by the Bell reboot—Alycia Pascual-Peña and Josie Totah—but they aren't given as much to do as they deserve. This isn't to say that Moxie doesn't build to a stirring finale that, I'll admit, had me weeping, but it's all just a little thin. 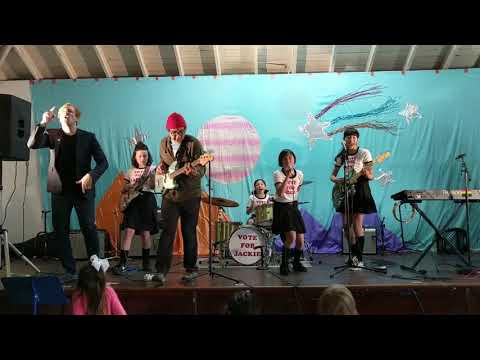 The same goes for its approach to riot grrrl itself. The Bikini Kill songs that are featured aren't exactly deep cuts—"Rebel Girl" gets the most airtime—but fingers crossed the mere allusions to Kathleen Hanna and her ilk will inspire at least some newbies to dig deeper. Netflix would have done well to license The Punk Singer, Sini Anderson's 2013 documentary about Hanna, as a companion piece, but interested parties are going to have to click over to rent it on another service.

The rest of the soundtrack is filled with a mix of old and new female-fronted tracks. Hanna's later band The Julie Ruin makes an appearance. Princess Nokia's "Kitana" scores a key scene. There's a great Lucy Daucus cover of "La Vie En Rose," and an even cooler cover of "Suddenly Seymour" from Little Shop of Horrors from A Giant Dog. But the biggest revelation is a band that actually has a cameo on screen: The Linda Lindas, a group of four teen and tween rockers who have been anointed by Hanna herself. They perform "Rebel Girl" at a Moxie rally, and also do a version of The Muffs' "Big Mouth." Turns out these girls actually opened for Bikini Kill during an LA stop on their most recent tour. Basically, they rule.

Part of me wishes that Poehler had made an entire movie about The Linda Lindas in the spirit of, say, the awesome Swedish film We Are the Best! The plot of Moxie falls into too many YA tropes to truly embody riot grrrl, but for some kid out there, it might be a nice starter pack to a whole new scene.