You might not think you'll cry at an octopus documentary, but you will.

For centuries, whenever people have suffered from certain ailments, been depressed, or simply felt overwhelmed by the world, we've been advised to spend some time on the coast and take in that rejuvenating sea air, maybe hop into the ocean for a bit if we're feeling adventurous. Documentarian Craig Foster, who directed 2000's gorgeous film The Great Dance about a group of expert hunters in the Kalahari desert who can track absolutely anything, experienced his own period of gloom that drove him back to the South African coast, where he braved the freezing waters and dense kelp forests to befriend a clever little octopus who stole his heart. Out of the footage he took of his eight-limbed companion, directors Pippa Ehrlich and James Reed, with the help of underwater cinematographer Roger Horrocks, made My Octopus Teacher.

In 2010, debilitated by adrenal fatigue and deep in the throes of a creative block, Craig Foster began freediving off the coast of the poetically named Cape of Storms, whose icy temperatures and rocky intertidal beaches make it a forbidding environment for even the most experienced swimmers. But once he got past the shallows, Foster discovered a dense kelp forest that harbored a vast, closely knit ecosystem of plants and creatures. As his body got used to the frigid water, he would go out for longer and longer stretches, deciding against wearing a wetsuit in order to more closely experience the environment. In the film, he describes how he is able to visit every part of this three-dimensional kelp forest, swimming up to the canopy or coasting on the seafloor as if he were flying. 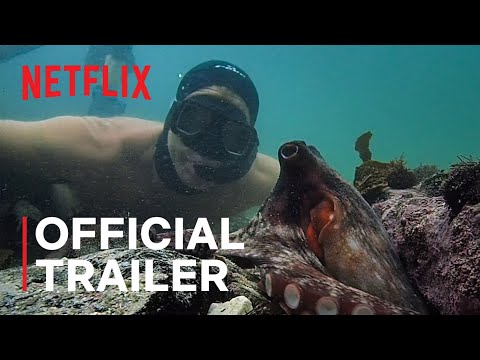 Soon enough, he met a small female common octopus whose den was underneath some shell-encrusted rocks in the middle of the forest, sheltered from the crashing waves by the kelp. The octopus, at first, was naturally skittish around Foster, who no doubt appeared as a looming predatory shape out of the depths, but, on a whim, Foster decided to try to visit her every day. After months of acclimating her to his presence, leaving cameras near her den to observe her behavior, and drawing maps of this tiny region of the seafloor, the little mollusc became not only accustomed to him, but actively sought him out, and one day reached with a tentative, questing tentacle to lightly touch his hand.

Over the course of nearly a year, Foster documented everything, from the octopus growing more comfortable hanging onto him as he swam, to all the daily dramas that make up a wild creature's life. The octopus's territory was beset by a gang of pyjama sharks, named for their vivid stripes, whose flat, pointy noses are easily crammed into cracks between the rocks where an octopus might hide. Foster was able to film her hunting crabs and snails, as well as a number of hair-raising chases as his octopus swam for her life, changing the color and the texture of her skin, disguising herself with shells, and clinging like Spider-Man to leaves of kelp.

It's these tense chases, as well as Foster's growing knowledge of sea life, that acted as a constant reminder of how short-lived this experience, in the long run, would be. Octopi don't live very long, just one to two years, and he was always aware that his wonderful, odd friendship would have an expiration date. In My Octopus Teacher, Foster describes his longing, inspired by the desert hunters of The Great Dance, to be "inside the natural world," and his equally strong desire, drawn from his tendencies as a documentarian and observer, not to interrupt the flow of life in this ecosystem -- even when the life of a creature he has grown attached to is threatened. Ehrlich and Reed's film works equally as a curious, emotional tale of an interspecies friendship, and as an examination of where humans place ourselves in relation to the natural world, why we often feel as though we are separate from it, and what happens to us when we realize that divide is a myth.