Season 2 of the underrated Apple TV+ show is imminent. 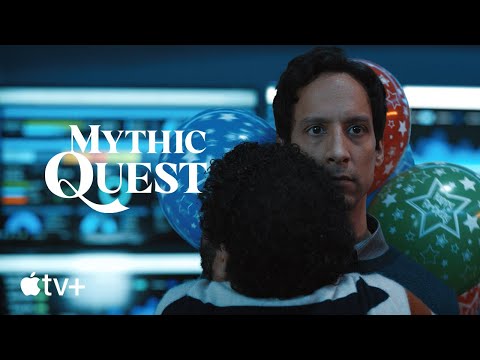 If you're only familiar with Danny Pudi from his work on Community as Abed—one of the greatest television characters of the 21st century—then you'll likely to be surprised by his turn on Apple's great and under-appreciated comedy Mythic Quest. His character Brad is the anti-Abed. Whereas Abed was full of childlike wonder, obsessed with the notion of friendship filtered through an addiction to pop culture, Brad is a crass money man. In an office full of video game lovers working on the eponymous fantasy RPG, Brad is only interested in the world of knights as far as it can make money for him. Pudi plays Brad with ruthless efficiency, and it's very, very funny.

As you can see in this exclusive clip from the upcoming fourth episode of Season 2, Brad wants to use kid streamers to sell his product and doesn't care how young they are, and he's extremely displeased when executive producer David (David Hornsby, best known to It's Always Sunny fans as Rickety Cricket) brings him a birthday surprise: his brother (Parvesh Cheena).

While Apple's Ted Lasso has taken off, winning a bunch of awards, Mythic Quest has flown under the radar, but the series created by Sunny collaborators Rob McElhenney, Charlie Day, and Megan Ganz is well worth your time. McElhenney plays Ian Grimm, the pompous (and jacked) creator of Mythic Quest, a Game of Thrones-esque MMORPG. But the show is not really about the content of the game. It's about the goofballs who work on it, like Charlotte Nicdao's Poppy Li, a programmer who has graduated to co-creative director in the second season. There are plenty of laughs drawn from the dynamics between these workplace weirdos, but also it has a lot to say about the challenges of collaborating in an arena where art and commerce are closely linked. If you haven't watched, you should jump in now. If you have, enjoy this new clip.