Do Not, Under Any Circumstance, 'Enter the Anime'

Netflix's new "documentary" is offensive in more ways than we can count.

Do you watch anime? If not, you probably know what it is, at least: Japanese animation or, to use a more broad definition, animation made in the style of cartoons made in Japan. It is an art form with a rich history, an extraordinary range of styles and subject matter, and more than its fair share of geniuses -- Studio Ghibli's Hayao Miyazaki and Isao Takahata, Neon Genesis Evangelion's Hideaki Anno, and Cowboy Bebop's Shinichirō Watanabe, among many others. Anime is becoming more popular globally by the day, and a documentary doing justice to its breadth, depth, and brilliance is a documentary I would rush to watch.

Enter the Anime, which was released this week on Netflix, is not that documentary. In fact, the hour-long film barely qualifies as a documentary at all. Rather, it is an autoerotic ouroboros of self-promotion. Netflix can call it a documentary if it wishes to, but billing something what it is not does not fundamentally change what it is: Enter the Anime is sponsored content winkingly performing cheeky quirk and self-awareness in that it's been promoted as a documentary. It is, undoubtedly, an ad for Netflix anime series. 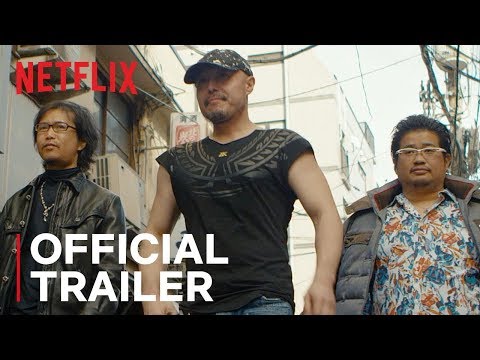 We never do enter the anime -- we never even get the definition of anime, let alone its history! Frankly, I'm stunned the word "Japanimation," which has long since been kicked to the curb, wasn't used in here, considering how patronizingly exocitizing its entire framework was. I started counting how many times director and narrator Alex Burunova called Japanese people, their culture, or anime "crazy," "deranged," "twisted," or some permutation thereof, and finally threw in the towel about 15 minutes from the end. It's perfectly imaginable that, aside from all of its cursing, the white "orientalists" of the earlier 20th century would find the film appealing: "Well, aside from the young lady's filthy mouth, this film is quite excellent, perfectly depicting the quaint and queer Japanese for what he is."

But I digress. Enter the Anime is bad for many reasons, chief among them being that it serves no purpose other than to make clear that Netflix produces and licenses anime, don't you know, and also, here are some of them, and if you want to watch them, they're all on Netflix! The dramatic arc is simple: Burunova, who self-admittedly "knows nothing about anime" (and therefore should probably not be making a documentary about anime, but, uh...), tries to figure out what anime is by Googling it from Los Angeles, does not figure it out, and then goes to Tokyo to figure it out, where she realizes that the question "what is anime?" is not really the point after all, without quite explaining what the point is besides going out of her way to say that anime is "made by misfits for otherwise misfits," just in case it wasn't clear that the Japanese are crazy.

Throughout, Burunova and others interview anime creators, all of whom are behind shows Netflix produced or licences. Not a single Japanese creator is interviewed until 12 minutes into the 56-minute runtime. Instead, Burunova interviews Adi Shankar, the Indian-American producer of American Netflix series Castlevania, written by British writer Warren Ellis and produced primarily by American companies Frederator Studios and Powerhouse Animation Studios. Shankar is the first of a series of creators to reveal what he last Googled, because apparently this is also a Google ad and because the interviewers were bad at their jobs. "The last thing I Googled was time travel," Shankar says. "Because I'm a time traveler. I'm from the future, I'm not from this timeline." He later goes on to brag about how Kanye West once called him to say he loved his fan videos and how he got his Netflix deal via a tweet, as well as to make stereotypically offensive comments about the nature of Rottweilers. He mentions his partner Kevin Kolde (without his last name), who initially planned the series as a film with his company Project 51 before Shankar came aboard to put his name on it, once.

By this point in the film, Burunova has already begun lamenting how she is completely unqualified to make it. "I was wishing he could whisk me back in time before I started making this movie," she says. Buddy, same here. Burunova's involvement, in general, is baffling. A white woman who knows nothing about the subject she's purportedly helping her viewers "enter," nor seems to care much about it, she is consistently painted in her own movie as incompetent and patronizing. It's easy to imagine how hard a shove Netflix must have given her to throw her this brutally under their bus.

Then we're on to another non-Japanese creator, LeSean Thomas, the writer behind the Cannon Busters comics series in addition to its Netflix adaptation (duh!), which will be released later this month. To be fair to Thomas and all the other creators interviewed here, with the exception of the extraordinarily smarmy and self-involved Shankar, they were clearly shafted by the documentarians, giving everything they could in response to banal questions that were poorly cobbled together for a joke of a final product. Or as another Thrillist contributor put it:

Thomas, who has, like Shankar, loved anime since he was a child, also knows his place in its world: "I don't really feel like an outsider, I feel like a guest." Regardless, guests probably shouldn't be consulted as experts, or at least not before, you know, the owners.

On it goes, with Burunova actually making a potty joke at the expense of Japan (whose paper industry prints more manga than toilet paper, isn't that funny!?) as Enter the Anime finally gets around to showing its first Japanese creator, Toshiki Hirano, director of Baki. The interview actually slaps! Or it would, if it wasn't, like everything else in here, undermined by overly busy and gimmicky video editing -- think a coked-out George Lucas cutting a bad music video -- and cut short with another dumb question. What's the last thing Hirano Googled? Netflix. Of course it is!

The other Netflix originals and licensed shows this touches on are Aggretsuko, Kengan Ashura, Neon Genesis Evangelion, Rilakkuma and Kaoru, 7SEEDS, Ultraman, Ghost in the Shell SAC_2045, BIII the Beginning, and Levius. And to be clear, the problem here is not that Netflix essentially made an ad about its anime slate, which is genuinely impressive and mostly good. (Going unmentioned, among licensed properties, were both Fullmetal Alchemist shows, Rurouni Kenshin, and plenty more. They're adapting Cowboy Bebop as a live-action show -- huge news! -- and don't even mention it!) The problem is that it is an ad for Netflix's anime slate purporting to be a documentary about the history of anime. It's not. It's all too surface level. There's no mention of anime's history at all, really, or its biggest names, or how Netflix got involved in it, even. Burunova does not mention an actual anime studio until Toei Animation, "the country's Disney," 23 minutes in, when we're also told, vitally, that chairman Kozo Morishita's astrological sign is Cancer. As a Cancer Moon, I can confirm that if Morishita is watching this, he is almost definitely crying about it. As a Libra Sun, I can confirm that I will have a much harder time trusting Netflix to do anime justice after watching Enter the Anime than I did before watching it. (I'm sorry, John Derderian. I'm really, really sorry.)

Other "oh my god" parts include: introducing a street interview segment in which no street interview is actually conducted; a photo of Kengan Ashura director Seiji Kishi with Arnold Schwarzenegger in which Arnold's face is blurred, presumably because he wanted nothing to do with this film; a section on Yoko Takahashi, the singer of the Neon Genesis Evangelion theme, which never mentions the show's name; and a relentless insistence that Japan is so clean. Again, more than two-thirds of the way through, Burunova's self-doubt creeps in: "I started to doubt everything. My decision to come to Japan. My ability to tell this story." She should, and so should Netflix. But at least of the two, she's self-aware.

We'll give it credit where credit is due, however. There is not a single white man featured in this movie. And the part with Takahashi is actually very cool, despite its shortcomings -- at one point, she's holding the Lance of Longinus at a concert. But again, this prop, essential to Evangelion's story, is contextless.

Anything that has the potential to bring in new fans to the medium is a positive, even an effort this misbegotten. But Enter the Anime is a documentary that fails every audience, refusing to explain anything fans don't know and offering no context for curious outsiders. That's because, of course, it isn't a documentary. It's an ad, and not even a good one.

John Maher is a contributor to Thrillist.