Why Netflix's 'The Mitchells vs. the Machines' Is a Major Moment for Animated Movies

'The Mitchells vs. the Machines' is the first animated film from a major studio that features (and celebrates) an openly LGBTQ+ hero.

There's a telling line of dialogue that comes toward the end of the wonderful new Netflix animated comedyThe Mitchells vs. the Machines. Katie, the world-saver voiced by Abbi Jacobson, is away at college and her family video calls her. Her mother Linda (Maya Rudolph) assaults her with classic mom questions: "Are you eating enough? How's class? Are you and Jade official and will you be bringing her home with you for Thanksgiving?" And with that, the film about an off-kilter family battling evil robots from Sony Pictures Animation introduces the first lesbian protagonist in a major studio film.

"We wanted to make it unambiguous," director Michael Rianda, who also voices Katie's younger brother Aaron, tells Thrillist. "You have seen other movies where it's like wink-wink, nudge-nudge. It's not a huge part of the movie, but it is in the movie. That's who she is."

Rianda explained that he and his co-director Jeff Rowe, who both worked on the Disney series Gravity Falls, were striving to portray as realistic a family as possible, and when they decided they wanted Katie to be gay, they ran it by the LGBTQ+ members of their team, who were enthusiastic about the idea. "We did a lot of iterations to find the right balance," he says. "Ultimately, the story is about dealing with your family, and it's not about [her sexuality], but in talking with the crew, we were thinking that might be what's good about it. It's just like: Her hair is red, she likes girls, and whatever and it's normal. It's normal in real life, why isn't it normal in animation?" 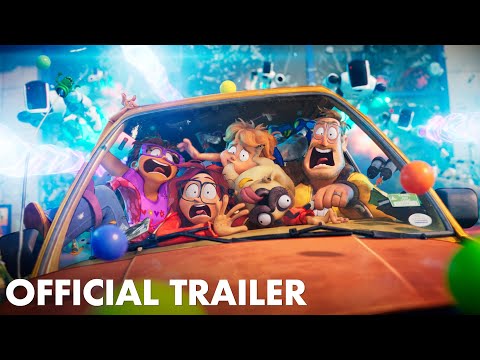 Throughout the film, which was animated in a similar style to its studio sibling Spider-Man: Into the Spider-Verse, Katie wears a rainbow pin, but Rianda and Rowe didn't want to stop at mere signaling; they took the step to make her queerness more explicit at the end of the film. "We wanted to actually do it," he says. Throughout the movie, Katie, who has gotten into her dream film school, pines over the friends at her program she connected with online before orientation. One of those new pals happens to be Jade (Sasheer Zamata). It's clear that once Katie actually gets to school, that relationship starts to turn romantic.

Introducing gay characters into mainstream animated films has made slow progress since 2016, when people frantically speculated that two women in Finding Dory were a couple—a fact that the filmmakers would neither confirm nor deny. In last year's Onward, also from Pixar, a supporting character, voiced by Lena Waithe, talked about her girlfriend. At the same time, Disney recently shut down Blue Sky Studios, halting progress on Nimona, a graphic novel adaptation that was set to feature a same-sex kiss.

In The Mitchells vs. the Machines, Katie is not just coded as queer. She is queer, and it's as much a part of her as her love of making YouTube videos starring sock puppets and her pug Monchi. And for a movie that's all about how a family communicates with one another, that moment in the denouement makes it clear that for all of the issues the Mitchells may have, Katie's sexuality is not just accepted, but embraced. Katie is a thoroughly exciting heroine, someone who saves the planet from a robot apocalypse with her boundless creativity. She just happens to be groundbreaking on top of that.