'Outbreak' Is the Feel-Good Pandemic Movie You Should Be Watching

Warner Bros.
Visit the Centers for Disease Control and Prevention (CDC) and the World Health Organization (WHO) websites for the latest information and travel recommendations regarding the global spread of COVID-19, or coronavirus.

I don't know if you've heard, but there's a global pandemic going on. As soon as the coronavirus, which originated in Wuhan, China and swiftly sped across the Middle East to southern Europe and the east and west coasts of America, there was a marked uptick in hand sanitizer purchases, an immediate shortage of N95 masks, and the 2011 Steven Soderbergh movie Contagion was the top rented movie on Amazon and iTunes for two weeks. Contagion is, to put it bluntly, absolutely terrifying, full of innocuous shots of people sneezing and touching subway poles, the rims of drinking glasses, other people's mouths, and the swift societal collapse is shot in a detached way that makes a lot of it seem like a documentary rather than a fiction film. It's hard to imagine how watching a movie like this would make anyone feel better, though it makes a strange amount of sense. If you are looking to have a good time while also scratching that pandemic movie itch, try the 1995 movie Outbreak on Netflix instead.

Twenty-five years ago this week, Outbreak, whose microscopic villain is an Ebola-like virus that originates in Zaire, opened in theaters while an actual Ebola outbreak was occurring in Zaire in the real world. For a certain generation, if you've seen this movie, you probably watched it in your biology class. Or, even if you didn't watch this movie, your teacher probably assigned you Richard Preston's nonfiction account of the origins and spread of filoviruses like Ebola titled The Hot Zone, on which the movie is based. Outbreak, though, is more of an action thriller and less of a real-world account of the spread of disease -- it's confined to mostly one fictional California small town, and, at a certain point, turns into a good-guys-vs-bad-guys melee with some sick helicopter stunts.

In 1967, the story goes, during the Kisangani Mutinies, the U.S. Army comes into contact with a novel virus called Motaba, but instead of alerting the world, they collect a sample and then bomb the small town, effectively eradicating it -- so they think. Instead, the virus lives on in a host population of small monkeys, one of which, 30 years later, is poached by an animal trader (Patrick Dempsey!) and taken across the ocean to America to be sold as a pet. In one memorable scene, the monkey sneezes wetly right into Dempsey's mouth, infecting him with Motaba. From there, the virus spreads into a small inland town, and a virologist from USAMRIID, played by Dustin Hoffman, makes it his business to find a cure -- and, hopefully, get back together with his ex-wife, a CDC scientist played by Rene Russo.

While tracking the spread of the virus and tracing it to its source, Hoffman's character and his team of military scientists, including Cuba Gooding, Jr. and (unfortunately) Kevin Spacey, figures out that the government has had a sample of it all this time, but declined to say anything about it or use it to work on a vaccine, which means that there are a ton of scenes of Dustin Hoffman yelling at his commanding officer, played by Morgan Freeman, about viruses "going airborne." It's exciting! And, spoiler alert, the good guys win in the end, after a very tense scene where Cuba Gooding, Jr. tranquilizes a monkey and an improbable helicopter chase during which Donald Sutherland nearly goes on a murder spree. 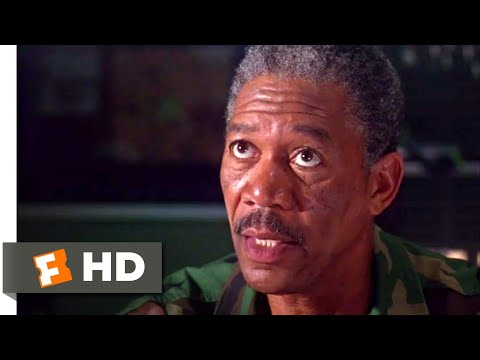 Though, before recently, I last saw this movie when I was in middle school, there are scenes I'll never forget. Patrick Dempsey has never looked grosser or more like an e-boy, and the scene where someone coughs in a movie theater and the camera zooms in on the particles of their spit floating through the air and into someone else's mouth still makes me cringe a little whenever I head out to the multiplex. Also, that monkey is very cute.

It's a symptom of the human condition that we just can't stop watching disaster movies in times of disaster. When the first whisper of a pandemic hit our shores, we immediately turned to what is essentially the opposite of escapism to deal with the reality of what's happening. Outbreak and Contagion are products of two entirely different eras, the first full of mid-'90s suspicion of the military industrial complex, the second a perfect encapsulation of modern, claustrophobic post-9/11 paranoia. But the disease in Outbreak, as it is in Contagion, is a whole lot worse than what's happening here, plus we get the added benefit of seeing how it all ends, and how the good guys, eventually, win. It's a weird kind of comfort food: as bad as it seems for us, at least it's not as bad as what's in the movies.