Anthony Mackie goes to war as a super-soldier in a Netflix movie that can't figure out what it's fighting for.

Unlike some of Netflix's other recent gun-toting genre offerings, Outside the Wire, a science-fiction combat film starring wayward Avenger Anthony Mackie as a military-funded Terminator, has more than bloodshed on its mind. After a brief title sequence, which establishes the setting as 2036 and outlines the vagaries of an ongoing conflict in Ukraine, director Mikael Håfström (Escape Plan) thrusts you into the chaos of battle with anonymous soldiers calling in back-up, Chappie-like robots (referred to as "Gumps" in the movie) firing away, and everyone yelling "fuck" really loud into their comms devices. Even in the future, with the latest tech available, war is hell.

That old chestnut also extends to the movie's drone pilot protagonist, Thomas Harp (Damson Idris), who disobeys a direct order to stand down and makes a deadly tactical decision from the relative safety of a Nevada Airforce base. For this transgression, he's chewed out by his superiors and quickly shipped off to Eastern Europe, where he's assigned to work with Mackie's smirking super-soldier Captain Leo. The two team up on a vaccine delivery mission with a secret intelligence-gathering quest tucked inside, one that raises the stakes by introducing the menace of nuclear weapons. From the jump, the ethical stakes—and the tidy character arcs—are clear: Harp will learn to value humanity (and stop blinking away collateral damage) by palling around with Mackie's surprisingly self-aware killing machine. 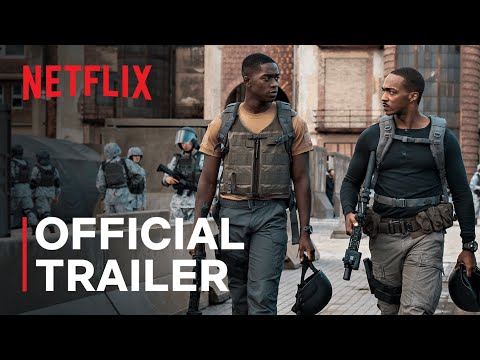 The "impressionable rookie and possibly unhinged mentor" dynamic between Harp and Leo is a familiar one, drawn from Training Day and a number of cop movies, but the science-fiction trappings do lead to a handful of clever moments. As Leo grills Harp about his girlfriend back home, demanding to see her picture and implying she's having an affair with her Pilates instructor, the younger recruit turns to his swaggering commander and hits him with an awkward question. "Aren’t you, like, three years old?" asks Harp. A later scene, that skirts around the implications of Leo's government-selected skin color, also hints at a slightly more provocative movie lurking beneath the shoot-em-up metal exterior.

But, perhaps in service of Netflix's almighty algorithm, Outside the Wire ultimately gives way to a series of Extraction-lite action sequences that take up more time than the earnest philosophizing about the nature of war and identity. As a cybernetic John Wick, Mackie, freed from the PG-13 confines of the MCU, applies himself to all the necessary headshots, body rolls, and arm chops. There's no shortage of footage of him running fast and absolutely wrecking random attackers in a digital blur of choreographed violence.

Given Netflix's long history of brain-deadscience-fiction films, this movie will likely earn some goodwill for at least engaging with a handful of "heavy" ideas. No one is expecting the next Starship Troopers or Children of Men here. Still, there's a rote quality to the presentation that grates as the movie builds to an ending that ends up pulling its punches. Håfström and cinematographer Michael Bonvillain apply a yellow-ish tint to many scenes, giving the movie a dreary, washed-out look. “War is ugly," Mackie's elite warrior solemnly observes at one point. Do the movies about it have to be ugly, too?