If you're thinking about watching Ozark, Netflix's gritty, new crime drama, get ready for a different kind of Jason Bateman. The Arrested Development star plays Marty Byrde, a brilliant Chicago-based financial advisor who moves his wife, son, and daughter to Missouri's Ozarks to fix dealings with his other employer, a Mexican drug cartel.

In other words, he's forced into full anti-hero mode, as thieves, competitors, and hitmen converge on him and his family from all sides. What else should you know before diving in? Read on for our brief, but handy, viewer's guide:

Why is it set in the Ozarks?

In the first episode, we learn that Mexico's second biggest drug cartel is mysteriously out $5 million. As its top money launderer, Marty (Bateman) is responsible for the deficit. The move to Missouri is part of his spur-of-the-moment plan to relocate the cartel's laundering hub and earn a second chance. "This place has more shoreline than the coast of California," he claims -- not to mention flocks of cash-rich tourists and cover from U.S. law enforcement. He promises to wash $500 million in five years. Instead, he's given a life-or-death trial run that makes up the bulk of Season 1.

As Saul Goodman explains in Breaking Bad (below), money laundering involves turning assets gained from criminal activity ("dirty money") into normal-looking income ("clean money"). You can wash money many ways, but Marty primarily does so by investing in and buying local businesses. (He briefly explains his strategy at the beginning of Episode 4.) 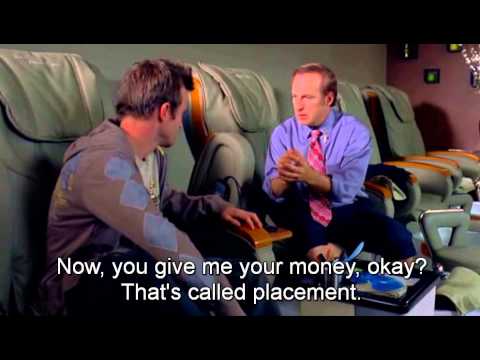 Given the subject matter, is this show violent?

There are a few graphic surprises -- the occasional execution, a body falling from a skyscraper, a homeless pair of eyeballs -- but Ozark isn't consistently soaked in blood. In fact, what's probably the most gruesome death takes place off screen.

Better question: How Breaking Bad is it?

Kinda Breaking Bad. It's easy to see why early critics are making the comparison on a superficial level: Ozark has warring drug dynasties, money laundering, and morally gray characters galore. But Marty doesn't go full Heisenberg in Season 1. His main motivation for doing anything is to protect his family, as he's more someone who's stuck in the drug world than someone who's trying to take it over. With regard to tone and pacing, Ozark more closely resembles Bloodline's first season.

Intriguing supporting characters and a race-against-the-clock sense of urgency make Season 1 hard to stop watching. The setting, with its compromised law and sketchy families, is also endlessly entertaining.

Great! He has a sex scene and a torture scene. He survives both. He meshes fine dramatic acting with tinges of his signature smart-aleck sense of humor to play a conflicted family man and add levity to the darkness. He also directed the hell out of four episodes, including the pilot and finale.

Who else should I pay attention to here?

The whole cast is strong, but Laura Linney, as Marty's wife, and Jason Butler Harner's undercover fed are especially convincing in their roles. The best part of the show, hands down, is Julia Garner as Ruth Langmore, a young spitfire turned redneck family don turned Byrde frenemy.

This sounds kinda good. Should I binge it ASAP?

It is good, but maybe knock this show out over the course of a few nights. Ozark delivers nine nearly hour-long episodes and one 80-minute finale. You'll want a couple breathers.