Meant to be like 'The Hunger Games' for small-town Texas high schoolers, this TV adaptation has less danger than your average episode of 'Jackass.'

The YA novel boom of the late 2000s inspired countless cinematic adaptations, with Hollywood banking on the hope that teens (and nostalgic adults) couldn’t get enough tragic love stories set in fantastical worlds and dystopian futures. But very quickly, the well ran dry; for every Hunger Games, there was a failed franchise starter in the shape of The 5th Wave or The Host. Even franchises that came out of the gate strong proved destined to fail—the film adaptation of the final book in the Divergent series was scrapped, with producers opting to make a TV miniseries, which was also eventually canned in 2018.

The rise of streaming services has done wonders for adaptations of darker YA material, no longer needing to tone down its more distressing plot elements to secure a PG-13 rating. Netflix's recent take on Leigh Bardugo's bestselling Grisha trilogy, Shadow and Bone, took advantage of that leeway, introducing, within minutes of the first episode, terrifying skeletal bird creatures that have no issue with impaling fleets of people. But Amazon Prime’s Panic, adapted from Lauren Oliver’s 2014 novel by the author herself, feels like a missed opportunity. Despite an intense premise—graduating high school seniors take part in a deadly game—the resulting 10-part series is free of threat or tangible stakes, the challenges all posing less danger than your average Jackass episode. Rather than being The Hunger Games transplanted to an unremarkable small town, it’s merely a bloodless Saw for tweens. When there are more exciting thrillers teenage audiences can see just a click away, it’s hard to imagine any of them sticking around for the entirety of the painfully boring run. 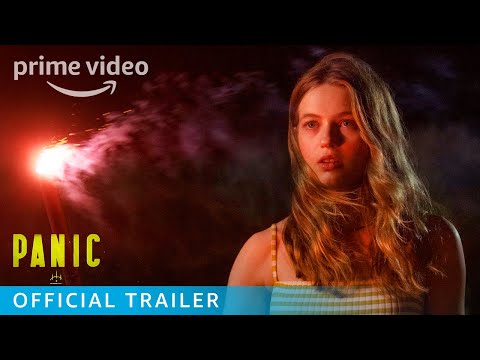 In a small Texas town, there’s an annual tradition: Graduating high school seniors take part in a game called Panic, an escalating series of challenges that hold potentially deadly consequences. Every year, there’s a cash prize offered to the winner (and make no mistake—there can only be one winner), which is enough to help them earn enough to leave their small town and move elsewhere. This is what reluctantly attracts Heather Nill (Olivia Welch) to the game; coming from a poor family, where her savings have been raided by her mother to fund her drug habit, she’s now back at square one in her quest for an exit route from the town.

Of the game’s other contestants, we predominantly focus on Heather’s best friend Natalie (Jessica Sula, still playing high schoolers 10 years after Skins finished airing), and bad boy Ray (Ray Hall), whose brother infamously won the competition a few years prior. But even to those taking part in the game, everything remains a secret; clues are hidden around the town about where each challenge will take place, and there’s a wider mystery unfolding about who the judges awarding points to the players actually are, who is organizing the game, and who is arranging for the cash prize itself. Newcomers to the town like Dodge Mason (Mike Faist) are instantly met with suspicion, as the contestants become amateur detectives and try to get to the bottom of what’s going on.

The teens certainly can’t do a worse job than the town’s actual police department, the one bright spot in a series that frequently wastes the potential of its high concept. Much like the cops investigating the Jigsaw Killer in the Saw movies, who remain incompetent at cracking the case even after the original Jigsaw dies, the uselessness of the sheriff’s department here becomes something of an unintentional recurring gag. As obvious clues about the location of each new challenge appear across town, the supposed professionals are still trying to decipher the meaning on Google while the players have already started the next game. In a show that consistently opts for self-seriousness, it’s one of the rare glimpses of actual fun, not least because one of the cops feels very consciously styled like a bargain basement answer to Marge Gunderson from Fargo. Their consistent failures to stop the illegal and previously deadly game, despite almost every challenge very noisily taking place within their quiet town, is far more entertaining to watch than the fairly dull challenges themselves.

This is the central problem with Panic. We keep seeing flashbacks to previous games that ended terribly, and yet those same deadly stakes are absent from the game the characters are playing. The inaugural challenge here is jumping into a deep river from a moderately sized cliff—an adrenaline rush, for sure, but no threat of death even though the screenplay references rocks at the bottom, yet from the angle the players jump off, there’s zero chance of casualty. In a clear example of the show misjudging how tense the viewers will find this, Heather’s jump is quite literally used as the first episode’s cliffhanger, and from here, the challenges don’t have any increased threat. Later on in the series, a test where the players have to walk blindfolded across an abandoned train track proves fairly dull due to them being offered help so they don’t risk plummeting to their deaths, and the season all builds up to a challenge involving an unconvincing CGI tiger. Watching this nearly a decade after The Hunger Games became a global YA sensation, it’s hard to believe that a similar premise ripe for intense life-or-death scenarios could be handled with so little dramatic flare.

In between the challenges, the episodes are filled with characters enjoying their first summer as adults, and attempting to solve the bigger mysteries surrounding Panic. For those who have recently caught up with the Saw franchise in time for Spiral, the reveal as to who organizes Panic will feel noticeably copy-pasted from the later films in that series, with every other twist about the people in charge of the game being of the “you can see it coming from a mile away” variety. These obvious narrative tropes might not have been a problem if Panic was adapted as a film—but as a drawn-out series, it always feels several episodes behind the viewer, each twist so heavily signposted there’s no real incentive to keep watching. If ever a book needed to be adapted as a trashy Blumhouse thriller, this is it. They’d certainly know that this would work better if it looked past the wider conspiracy drama and delivered on the potential of this deadly game.

A film would also eliminate the need for the half-hearted YA cliches within the series. Midway through this first season run, there’s a flaccid attempt at a love triangle between Heather, Ray, and Heather’s friend Bishop (Camron Jones), which never takes flight and just feels like the show ticking off every expected trope. By this stage in the season, it’s hard to imagine any teen viewer maintaining interest. The YA genre may not be as popular as it was a decade ago, and Panic makes it clear that its best days are far behind it.

Alistair Ryder is a contributor to Thrillist.
Our Newsletter