The Scoop on PARO, the Breakout Seal From 'Master of None'

In the eighth episode of Aziz Ansari’s new Netflix show Master of None, we meet PARO, a therapeutic robotic companion seal and total scene-stealer. You were likely asking the same questions by the time the credits rolled: Is PARO real? Why is it a seal? Where can we get our paws on one? Thankfully, Dr. Takanori Shibata, creator of PARO (which you can purchase, by the way, if you have about $5,000), emailed us from his native Japan to answer some of our burning questions.

How did you come up with the idea for PARO?

When I started to develop “personal robot” in 1993, I wondered what kind of robot I should do. I thought if I develop some robots for tasks such as cleaning and cooking, specialized machines are better and cheaper than a robot that can work on many tasks. Therefore, I thought I should develop [one] that is useless in terms of works or tasks. I thought of what we have in our lives. Pet animals are useless in terms of works or tasks, but a lot of people love animals. I wondered what is their role for humans. Pet animals can enrich our lives psychologically.

I investigated a lot of research on human-animal bonds and animal therapy. Animals are very good for humans, but some people cannot own them because of allergies, fears of bites and scratches, infections from animals to humans, etc. Some places such as hospitals and elderly facilities also do not accept animals because of difficulty of management, infection, cost, etc. For example, for a therapy dog, we have to choose an appropriate kind of dog and train it with about $30-40K, and it may cost about $50K over its whole life (about 12 years). Therefore, I thought if animal-type robots are accepted by humans and have therapeutic effects like animals, they should be more attractive, convenient and cheaper for people and facilities that cannot own real animals.

Why did you choose to make PARO a seal verses another kind of animal?

A seal is very cute and has good shape for holding. Of course, dogs and cats are more popular than seals. I developed a dog robot and a cat robot as well as a seal robot. I asked people to evaluate them. In the cases of familiar animals such as dogs and cats, people had high value before interacting with them, but when they started to interact with them, they reduced the value because they compared the robots with images of real animals and became very critical. In the case of a seal, people did not have high expectations, but through interacting with it, they increased value on it. Therefore, as a seal is not very familiar to them, people can accept a seal robot very easily.

How does PARO work?

PARO has many kinds of sensors, such as vision (only brightness), audition (speech recognition and sound direction), tactile (whole body and whiskers), temperature (keeping its body temperature), posture, and so on. PARO has seven actuator systems that move very silently without causing mechanical noise. PARO is autonomous and has Artificial Intelligence, so that PARO has two kinds of learning functions; one is name and the other is characters. If its owner give a new name and call it again and again, PARO learns the name after a while and started to respond to it. Being stroked is good for PARO and being hit is bad for PARO -- these are innate values of PARO. PARO tries to be stroked and learn behaviors that its owner likes through interaction. PARO gradually acquires characteristics that the owner likes.

How does PARO mimic the behavior of a real animal?

I visited Canada to interact with real baby seals, and learned a lot about real ones.

What are the positive effects of using PARO?

What other applications are there for PARO and other similar therapy products in the future?

PARO can be applied to many kinds of patients and reduce a lot of psychotropic medications for depression, anxiety, pain, sleep, schizophrenia, etc. that cause bad side effects. PARO is the only robot certified as a neurological therapeutic medical device by the FDA, with scientific and clinical evidences of therapeutic effects and safety.

To what extent do patients bond with PARO?

PARO can be a pet at home for ordinary people and a therapeutic medical device as approved by FDA for elderly people with dementia, cancer patients, children with developmental problems such as autism and Down syndrome, PTSD, etc.

Do you have one?

Many in my office.

Can you describe a little bit the experience of using him?

When people interact with PARO, they have good smile and make me very happy always. Here is one of the examples when I brought PARO to earthquake and tsunami refugees in Japan in 2011. I and my colleagues have brought about 80 PAROs in the area that got damage by earthquake and tsunami since 2011, and people are still happy with them.

Did you see PARO featured on Master of None, and if so, what did you think?

I have not seen it. It is very nice for PARO to be introduced in a good story. The Simpsons had a different interesting story. 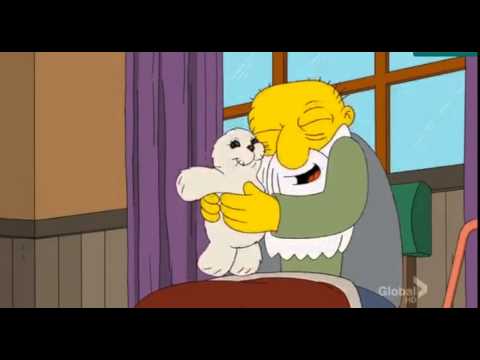 Anna Silman is a staff writer at Thrillist Entertainment. She previously wrote for Salon and Vulture. And yes, she really wants a PARO, although she would settle for a standard issue house cat. Find her on Twitter @annaesilman.