Paul W.S. Anderson Is the King of the Video Game Adaptation

With 'Mortal Kombat,' the 'Resident Evil' franchise, and the upcoming 'Monster Hunter,' Paul W.S. Anderson shows that video game movies can actually be tons of fun.

Let’s face it: Film adaptations of video games have a bad reputation. No matter how much love there is for the source material, translating a 40-hour experience into two hours or less is a daunting, difficult task. Most importantly, filmmakers must compensate for the fact that you're merely a spectator rather than a player-as-protagonist immersed in that world. Films such as Super Mario Bros (1993) and the many iterations of Tomb Raider have taken iconic main characters in Mario and Lara Croft and tried to make them realized on screen, with wide-varying degrees of success. Most, however, fumble the execution, disappointing audiences with movies that don’t capture the spirit and excitement of playing the game.

But there is one director who has mastered the video game adaptation, from stories about zombies to interdimensional fighting competitions: Paul W.S. Anderson. Helming the Resident Evil franchise and Mortal Kombat, video games launched in the '90s, he has shown he is a master of the bloody and ridiculous by never taking his subject matter too seriously, instead leaning into the outlandish aspects of playing games with the goal of entertaining audiences with gorgeous spectacle. Anderson is able to capture the atmosphere of a game, rather than its narrative, to create unique twists on beloved series that appeal to both dedicated fans and those who've never picked up a controller.

With only his second feature film, Anderson quickly staked his expertise in 1995 with his version of Mortal Kombat, a fighting game with a cast of characters with unique abilities, like ripping out someone’s spine (Subzero), turning into a dragon (Liu Kang), and removing heads with their tongue (Reptile). While the original three arcade games are just two characters hitting each other with no defined narrative arc, the film takes familiar playable characters, such as Johnny Cage (Linden Ashby), Scorpion (Chris Cassamassa), and Kitana (Talisa Soto), and does the simplest, yet best thing: They beat each other up. That’s it; it’s so simple! While later Mortal Kombat games became more sophisticated, Anderson was able to take the then-barebones mythology and make it into something big. He knows how to craft elaborate, over-the-top combat scenes that make audiences laugh, cheer, and gasp. 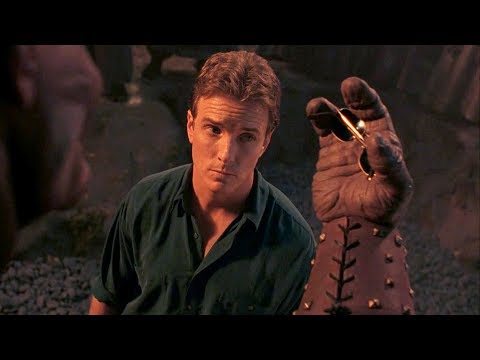 Take the fight scene between Johnny Cage and Goro (Tom Woodruff, Jr.), two well-known characters simply hurling their bodies at each other in hopes of victory. Cage’s signature move in the games is a, ahem, nut punch. So, in perhaps the best moment of the film, Cage drops into a split and delivers a powerful punch into Goro’s crotch. The massive, four-armed monster is reduced to tears with one perfectly placed shot. While their brawl continues, this single moment, which captures an iconic part of the games, illustrates how Anderson is able to marry video game aesthetics with the cinematic.

Let us not forget perhaps the best and campiest performance of all: Christopher Lambert as Lord Raiden, an original Mortal Kombat character and a god of thunder and lightning. Donning a long white wig and speaking with a deep gravelly voice, Lambert chews his scenes as he flips between over-the-top intensity to all-out goofball, a character staple in Anderson's films. As Cage delivers his signature blow against Goro, Raiden lets out a massive cheer and punches someone in the arm, for which he quickly apologizes. He’s not just the serious god who randomly appears with cryptic wisdom; he is also a giddy fan cheering on his hand-picked team.

The Mortal Kombat movie isn’t just a cult favorite. When it was first released in mid-August, it was number one at the box office, pulling in $23.2 million its first weekend. Fans flocked to the theaters to see Anderson’s creation of a universal favorite, made PG-13 specifically to be accessible to teenage fans of the game. Outside of audience reception, critics weren’t particularly fans of the cheesy fight sequences and what was considered subpar dialogue (which is false). But Mortal Kombat is not really a film made to satisfy critics; it was about pure entertainment. No matter the critics' score, Mortal Kombat — which still holds a 48% rating on Rotten Tomatoes — proved that Anderson was not afraid of taking big, dumb swings in his films and that audiences would respond.

Then, in 2002, came the first Resident Evil movie, spurring a six-film series, of which Anderson directed the first, fourth, and sixth film, but is a credited writer for the entire franchise. (Originally, it was supposed to be written and directed by legendary horror filmmaker George A. Romero, but he was dropped from the project, leading to Anderson's takeover.) The Resident Evil games, like Mortal Kombat, have a huge fanbase. Since the first game’s release in 1996, the franchise has sold over 103 million copies worldwide, making it Capcom’s best-selling game franchise. And despite poor critical reception, these films have earned $1.2 billion globally, making it the highest grossing video game adaptation of all time.

Resident Evil takes place in a world where the evil Umbrella Corporation has manufactured the T-virus, which turns the infected into flesh-hungry zombies. Each of the 25 games (7 games in the canon, with a remaining 18 spinoffs and remakes), while taking place in the same universe, follow different stories of different characters that go so far as to have a cult in Spain infected with a parasite.

While Anderson pays homage to in-game characters and monsters such as Jill Valentine (Sienna Guillory), Chris Redfield (Wentworth Miller), and Nemesis (Matthew G. Taylor), he decided to create a new character, Alice (Milla Jovovich), who becomes the proxy for the player character. Instead of shifting perspectives with each subsequent film, the viewer is guided through the world through Alice's eyes. While yes, there is some nepotism involved here — Jovovich also happens to be Anderson’s wife — Jovovich more than proves her worth as Alice, a science experiment gone rogue, through each of these movies, staking her merit as an action star. Not only is she a fighting machine, she has psychic powers which get stronger as the franchise progresses. Decked out in stylish post-apocalyptic gear, from a short red dress to latex corsets and thigh-high stockings, Alice adventures across barren wastelands killing zombies, saving lives, and systematically taking down an evil corporation. But Alice is not just one person. She has hundreds of clones, which come together and try to take down Umbrella in the iconic opening of Resident Evil: Afterlife.

This is a new perspective on a world run by the Umbrella Corporation. Yes, the franchise does stumble in trying to create more drama, romantic interests, and intrigue for the protagonist, but it never loses sight of the draw to Resident Evil: big monsters, tons of zombies, and vicious kills with ridiculous weapons, like Alice's quarter-loaded handguns or big, dual-wielded katanas.

One of the most notable scenes of the franchise happens at the beginning of the first film in a vicious killing of newly introduced characters with lasers that slice up bodies like a Christmas ham. Alice and a team of soldiers are trying to gain access to the building's A.I. system, known as the Red Queen, to try and escape. However, the A.I. protects herself with an elaborate system of lasers that no ordinary person can dodge. The four soldiers are quickly picked off, which culminates in the slicing and dicing of the final soldier standing with an inescapable grid of deadly light. So many characters are killed so fast, which sets a tone of survivalist dread and desperation that also permeates the horror games. Not only that, but this is a moment pulled from Resident Evil 4 as character Leon must dodge lasers through quicktime events. Anderson does not try to recreate that exact moment, but instead interprets it into something even more shocking and impactful.

But more than just monsters and amazing death sequences, Anderson builds the world of Resident Evil with intricate sets that match his energy for these films. These are not just any labs or destroyed cities. These are futuristic labs taken to sci-fi extremes, from their stark white walls to their troves of hidden weapons. The dilapidated buildings are complex labyrinths full of rooms where zombies can hide. Unforgettably, the bathroom fight sequence from Resident Evil: Afterlife, where Alice and Claire (Ali Larter) fight a giant axeman covered in nails and dragging a sword that would fit right into an arc of Bleach, is a perfect example of Anderson expertly utilizing a created space. Complete with exposed pipes and a lot of urinals, that bathroom becomes the arena for an intense showdown as the axeman destroys pipes spurting water and Alice and Claire finish him off.

After a decade of the Resident Evil films, the franchise is coming back with a new movie reboot, which is said to be more loyal to the first game's narrative, and a CG Netflix series. Anderson is not involved in either, so we're waiting to see if these will play much more serious and dark, or continue in his exaggerated footsteps. (The first teaser of the Netflix series sure looks a lot more like pure horror, though.)

Luckily for fans, Anderson isn’t slowing down on new video game adaptations. His version of Monster Hunter, an open-world fantasy game where you, uh, hunt dinosaur-like monsters with massive swords starring (who else!) Milla Jovovich, is supposedly coming to theaters this December, contrary to the initial release of April 2021. In the latest teaser trailer, we get a taste of what’s to come: He has placed his signature Anderson twist on the adaptation as an elite military force falls through a portal into a world populated by giant monsters. Again, Anderson is taking the conceit of the game without trying to create a particularly loyal adaptation. Instead, he is using the well-loved aspects, which are of course the monsters and wild weapons, and making a new story within that universe.

Ultimately, it will work because of how Anderson works: Instead of trying to make video games palatable to wider audiences, he wants to satisfy fans. Each of his video game films is a surprising beacon of confident, fearless filmmaking. No matter the subject matter, Anderson pours his whole heart into a movie that revels in a video game’s ridiculousness rather than trying to remove it.

Mary Beth McAndrews is a film journalist who has written for Polygon, RogerEbert.com, Bitch Media, Film School Rejects, and more.