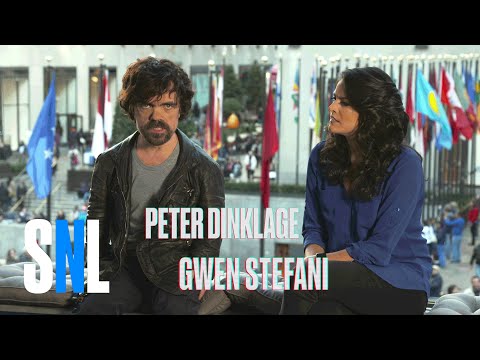 Cancel your Saturday night plans, because Peter Dinklage is hosting Saturday Night Live this weekend. As the teaser proves, Dinklage's natural charisma and the promise of massive amounts of Game of Thrones hype should combine to make this a must-see episode. Plus, Gwen Stefani will be there! What more could you want out of an hour and a half of TV (well, other than a new Game of Thrones episode)? Here's some of what we hope to see on Saturday night:

Particularly talented and/or cool musical guests often appear in the sketch portion of the show, and Gwen Stefani definitely qualifies as both. While there are plenty of possible roles for her, we personally think she would do a bang-up job as Tyrion's conniving sister, Cersei Lannister. Much like Cersei, Gwen looks great in French braids and has romantic dalliances that fascinate the masses (you know the Jaime/Cersei relationship would have been all over WesterUs Weekly) -- plus, she can rock an ethereal gown like it's nobody's business. It doesn't really matter what the sketch is about, but we're gunning for some sort of slapstick-y, gag-filled Lannister sibling road trip. Seriously, we'd watch "The Lannister Siblings Go to [Blank]" in just about any permutation.

We've already observed that Donald Trump makes perfect sense when slotted into the violent, bloodthirsty world of Westeros and that all the (former) GOP candidates have viable GOT analogues. So now would be a perfect time for a Game of Thrones/2016 election crossover. Seriously, it writes itself. We have Trump, the petulant boy-king; Ted Cruz, the soulless White Walker; Hillary Clinton, the political maneuverer from one of Westeros' ancient houses (Stark or Lannister, depending on your leanings); and Bernie Sanders, the principled outsider (who curries much of the coveted millennial dragon vote). Just throw 'em all together, give them some medieval weapons and let the rhetoric and bloodshed begin.

Dinklage has never hosted before, but he did do a memorable cameo back in 2013, playing a very sloshed version of himself alongside Bobby Moynihan's recurring "Weekend Update" character "Drunk Uncle." Please, SNL, bring "Peter Drunklage" back, so we can hear more of his prescient thoughts on Marco Rubio, Tumblr, and the problems with today's youths ("They just skateboard from Nintendo to Nintendo like a bunch of Taylor Swifts.")


Kyle Mooney bothering Game of Thrones fans on the street

The big question leading up to Game of Thrones' return is whether Jon Snow will rise from the dead or not, and who better to interrogate that urgent question than SNL's resident man-on-the-street reporter, Kyle Mooney? We've already seen him harass Bieber fans and conduct really awkward Super Bowl interviews, so let's send him to a Game of Thrones fan convention or viewing party with some trolly Jon Snow questions and see what happens.


A "Women of Westeros" song

The ladies of SNL have been putting out some top-notch all-female music videos in recent months, and you know what other show has a badass group of women kicking ass on a weekly basis? Game of Thrones, duh.

We think "Anthem for the Downtrodden Women of Westeros" (working title) would make a great addition to SNL's other girl group hits like "(Do It on My) Twin Bed," "Back Home Ballers," and "This Is Not a Feminist Song." There's so much to sing about: corsets, Kings Landing gossip, Westeros' unending cycle of patriarchal violence. Throw in a frenetic rap verse from Bobby Moynihan’s George R.R. Martin and some sexy dancing from Dinklage, and it’ll be a banger!

Anna Silman is a staff writer at Thrillist, an alum of Salon and Vulture and a Stannis Baratheon fan. Find her on Twitter: @annaesilman.