"I would never be one to say you can't laugh at a fart."

A knife methodically chops a series of large vegetables. A spoon stirs a bowl full of pulverized fruit. Viscous, red liquid bubbles and boils in a large pot atop a table full of sound equipment. An audience has gathered to watch the latest performance of a collective of "sonic caterers," whose mission is to test the boundaries of art by making music from noise.

If that sounds absurdly pretentious, it is. English director Peter Strickland's latest oddity Flux Gourmet, which comes to limited theaters and VOD June 24, equally skewers (in all senses of the word) the world of art and the world of criticism, concocting a hilariously gross and grossly hilarious parable of the impossible interconnectivity between those who create and those who consume. Set inside an artistic residency overseen by an overbearing director (Gwendoline Christie), the film follows the sonic exploits of a trio of artists (Fatma Mohamed, Ariane Labed, and Asa Butterfield) who spend their days plugging amplifiers into various foods and seeing what comes out. The group is observed by a journalist named Stones (Makis Papadimitriou), who is fighting a mysterious and uncomfortable gastrointestinal disorder, and when the group catches wind of his misfortune, he is slowly absorbed into their work. 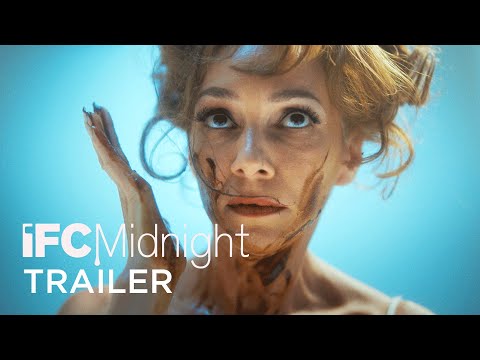 Thrillist: You tend to create these wonderful worlds, these pocket universes in your movies, where absurd things tend to happen and you just have to accept them. Do you have the idea of the setting in your head first? Or is it more borne out of the writing itself?
Peter Strickland: I wish I could pinpoint exactly how this one started, because it was a bunch of things coming together and they all kind of interlinked, somehow. I know the more I got into it, the more I realized that, to my knowledge, I wasn't aware of many films dealing with stomach issues in a serious way. What if I took something which is normally played for laughs in cinema, and what if I put a different context to it and treated it, you know, more seriously? A character who's hiding things all the time, and that extreme discomfort, and then that claustrophobia of being with a band. And then even worse than that, the band wanting to jump on the bandwagon of his own pain and discomfort and kind of rope him into their work. It just said a lot about, as writers, this game we play of how much we're hiding, how much we're revealing to an audience. Stones, when he says that line about when he has this colonoscopy in public, something so private "sacrificed for the sake of art." I was interested in looking at that.

When someone has some sort of bodily issue, it's mainly treated as a punch line. And in this case, not only is it kind of the plot of the entire movie, but it's a lot more empathetic.
Well, yeah, I mean, I would never be one to say you can't laugh at a fart. But it's all context. In his case, he's suffering and those symptoms are synonymous with not just celiac disease, but bowel cancer and irritable bowel syndrome, Crohn's disease. I think what he has is quite specific, it is an autoimmune issue. Even people who don't suffer from it, I think everyone's had a bad night. So much violence is not taboo at all [in film], but everyday natural functions of the human body are always taboo. If you can open up a conversation where you can talk more freely, it can't be a bad thing.

There's this online joke format that's been going around called "Hot Girls with IBS," which I thought about a lot while watching this.
[Laughs.] Whatever, whatever.

You have two movies going on here. There's this satire between artists making their art and this embattled relationship with the people who are funding them. And then a little bit of a darker movie where someone is suffering from this pretty common but serious medical condition. How do you mesh those two ideas together?
I think part of it was taking something which is normally funny in film, and attempting to make it serious. And taking something which is often done more as drama, and making that comic. What I'm hoping is the humor with all the bickering with the band and these ridiculous power struggles between them and the patron is as inconsequential as a tiny sonic effect. You put yourself in a situation where you try to go further than you would in real life. It was very important for me to not take sides, and to portray everyone, apart from Stones, in quite a bad light. So you, as an audience, you're not quite sure where your bearings are, you're not quite sure what the filmmaker is telling you to think.

I prefer that over overly moralistic, "Here is the theme of the film. And here's how we're going to do it. And here's how you should feel at the end." This one definitely has more of a conversational element to it, where you can choose where you want to be by the end.
Yeah, even when it came to the diagnosis. There's a danger of being overly earnest, which I find very offputting in film. So when I spoke with Makis and Richard [Bremmer], who played the doctor, I just thought it would be more interesting to do it like—do you have X Factor in America? These talent shows where you have the envelope and they'll play it to death until you're on your knees begging to know what the answer is. When I spoke with Richard, I said "Play it like X Factor. Just play him for all he's worth and until he's gonna go up and strangle you, basically." I think filmmaking should be riddled with deviousness and mischief and deceit. I think all my favorite filmmakers have that.

The gastrointestinal issues plot fits in perfectly with the work that these artists are doing primarily with food and with eating. Did one idea come before the other?
I honestly can't remember which came first. They pretty quickly came together. I used to be in a band that was dealing with making noise from cooking. We never went to that extreme. But, I was looking at people like the Viennese Actionists, who are really going out there in terms of bodily fluids, and then a bit too far. They were killing animals, and so on. I'm a vegetarian. It's just too much for me. But, again, that confrontational element was something I was really interested in, the idea of taboo.

I think a lot of the bands that I was listening to were dealing with noise, were dealing with shock value. So it makes sense for Fatma's character [Elle di Elle] to cling onto something that could give her performances shock value, such as Stones. It fed into the idea of how much of ourselves—emotionally and graphically, physically—we put out there for an audience. How cathartic is that to someone? You read about a lot of people who have these very private forms of cancer, who are very brave, and they open up. And I think for them, it's very cathartic. It opens the door for other people to say, "I have the same thing." So there's an element of that. I think Elle would do anything to shock the audience. But as a filmmaker, it's not so interesting. It's such an easy thing to do. It's only interesting when it opens up a conversation that somehow is socially liberating.

You've worked with Gwendoline Christie before, and she's fabulous in this. Did you feel her playing this character while you were writing this?
I did think she could play that type of character, someone I see almost like a film executive, but very flamboyant. And we spoke a bit about Daughters of Darkness, that kind of look, and with her partner [fashion designer] Giles Deacon, who did her costumes, and [milliner] Stephen Jones. We had a very brief discussion, and I kind of left them to it. When we spoke it was, "Don't turn up in jeans." It was a loose discussion about the decadence of the character. Especially as she has this name [Jan Stevens], which is quite a regular name. The look was quite at odds with the name she had.

There's so much wonderful use of language in the script and so many lines that I was furiously scribbling down while I was watching, like "bourgeois frittata" and "pseudo-Hellenic alpha-intellectual." Does stuff like that come from actual conversations that you've had with people?
Some things are actually mishearings. I was walking past someone and I thought this woman said, "Have a stupid day," to someone else. She was smiling and I misheard her. Oh, that sounds great, "Have a stupid day." It doesn't make any sense. I do mishear things, and I tend to jot them down. Some of them are just mistakes people make, like "one hundred percent-ly," turning that into an adverb. Some things I make up myself. Some things are actually accidents on set.

Fatma, English is not her mother tongue. She accuses Asa's character of having wet dreams, but she said "white dreams" by accident and I said, "Just leave it in, it sounds better." And she was meant to say "technique without vision," but she said "technique without visions," and again, it has this kind of double meaning. Obviously, it's very arrogant of me as a Westerner who doesn't speak other languages to potentially make fun of Fatma's English. I think it's just something very interesting, when you have these differences. She knows me well enough. She knows I wouldn't make fun of her.

I don't know if you've ever read the short story "Bullet in the Brain" by Tobias Wolff. At the very end of it, this very forbidding, mean character has this flash of memory of a little bit of language that somebody misspoke, but he loved it so much that he thinks about it all the time.
No, that is a thing. It just makes you rethink. There's something poetic about an adverb used incorrectly, and so on. It's something just slightly off-kilter.