To celebrate 25 years of Gary Busey eating a rhino's ass, I went back and rewatched the original to figure out exactly what made the movie such a thrilling and ridiculous ride because, like Patrick Swayze says to Keanu, I wanted it so bad it’s like acid in my mouth. Come on, compadre.

1. It’s all about the casting

Johnny Utah and Bodhi: now those are movie-character names. They’re the ridiculous, over-the top monikers that require ridiculous, over-the-top performers to bring them to life -- actors like Keanu Reeves and Patrick Swayze, specifically. Despite Reeves' reputation for vacant stares and lunk-headed line readings, his calming blankness brings a stabilizing force to Point Break. With his slicked-back hair, deadpan delivery, and, "Hey, you wanna check out my band Dogstar?" charm, Reeves is the perfect audience surrogate, bringing the viewer into both the macho world of the FBI and the mysterious realm of surfers with laid-back ease.

And then there's Swayze. Has any actor so fully embodied every New Age truth at once? Watching him in Point Break is a bit like listening to an Enya song, staring at a crystal, and doing one-armed pull-ups at the same damn time. Like in Road House, he plays a character with a zen-like quality who also has the capacity for brutal, throat-ripping violence. He is a man of contradictions. He is a warrior in sweatpants. A Samurai in a wetsuit. He is Swayze.

Here's an incomplete, context-free list of lines Gary Busey says as FBI agent Angelo Pappas: "Welcome to Sea World, kid"; "Look at the tan line on this guy"; "I was takin' shrapnel in Khe Sanh when you were crappin' in your hands and rubbin' it on your face"; "When they run, they dump the vehicle and they vanish like a virgin on prom night"; "The air got dirty and the sex got clean"; "Ha ha, this Calvin and Hobbes is funny"; "I'm so hungry I could eat the ass end out of a dead rhino"; and "I was in this bureau while you were still popping zits on your funny face and jacking off to the lingerie section of the Sears catalog."

On paper, these lines are all off-kilter, sex-obsessed zingers, but coming out of Busey's mouth they become haunting tough-guy poetry. You haven't lived until you've seen Gary Busey laugh at a Calvin and Hobbes cartoon while ordering a meatball sandwich.

3. It has a great dick boss characther

Movies about FBI agents who get sucked into an underground world of adrenaline junkies require one essential ingredient: a pissed-off supervisor with a stick up his ass. You know the type. He's the kind of guy who needs results now, goddammit! Luckily, John C. McGinley, the character-actor extraordinaire who eventually became the guy who yelled a lot on Scrubs, is the perfect guy for the job. McGinley makes lines like, "I guess we must have an asshole shortage" sing.

The Point Break remake was rightly praised for its often impressive, technically complicated stunt sequences, but what that movie lacked was an anthropological interest in the cult of surfing and a sense of beauty that comes with these death-defying feats. With her art-school background and eye for the ethereal, Bigelow successfully captures what surfing writer William Finnegan has called "a dynamic, indifferent world." Despite the movie's preposterous themes and puffed-out swagger, the surfing scenes are filled with joy, anger, and a disquieting sense of peace.

5. The love interest is an actual character

Pop quiz: who is the romantic lead in Point Break? As much as people on the Internet would like for it to be Bodhi, the film's real romantic heart is played by Tank Girl herself, Lori Petty. While Petty's performance lacks the high-wire pyrotechnics of Busey's supporting role, she has the harder job: grounding the movie in an emotionally real place. Besides teaching Utah to surf, she also helps undercut the movie's pomposity by rolling her eyes at Swayze's proto-Burning Man philosophy, giving this goofy bro-fest a sardonic feminist edge. It's a real performance that saves the movie from skydiving right into kitsch.

More than a deep dive into the subculture of surfing, Point Break is a fascinating critical study of people who wear leather pants and vests while playing touch football. Who were these style innovators? Did they stumble into this casual game after leaving a Guns N' Roses show? Did Bodhi's crew have the idea for leather sweatpants years before Kanye West? We may never know.


7. It's got sick computer graphics

I bet you didn't know the original Point Break has a scene where Keanu Reeves explains how to use DNA software on a computer. Well, it does. Someone give this guy a promotion -- Keanu was the original CSI.

I've seen Point Break a handful of times, but somehow I'm always caught off guard by the sequence where Utah and Pappas scrounge around the beach cutting the hair off unsuspecting surfers. How many hair samples do they actually collect? Why aren't the surfers more indignant? Did they cover the whole beach? So many questions -- no hard answers.


9. And there are fire-breathers!

Fact: in the '90s, it wasn't a dope party until a fire-breather showed up. You know Bodhi knows how to throw a rager because the first thing you see upon entering his shindig is a woman breathing fire. 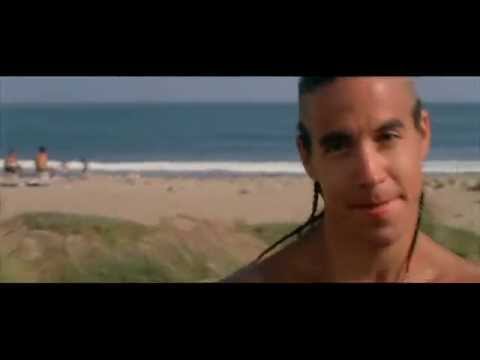 10. It's got that amazing Red Hot Chili Peppers cameo

Sock-loving frontman Anthony Kiedis plays a pivotal role as a surfer with two braids, but they really should have just recruited the whole band to be in the movie. Flea already played Needles in Back to the Future II and had a part alongside Keanu in My Own Private Idaho, so we know the dude can act!

In a warm-up for The Hurt Locker and Zero Dark Thirty, Kathryn Bigelow stages one stomach-churning raid sequence in the film that points to her future as the undisputed champ of pulse-pounding, militarized suspense. When the FBI goes after Anthony Kiedis and the rest of his gang, mistaking them for the bank-robbing Ex-Presidents that have been terrorizing Los Angeles banks, Bigelow gets the chance to put on a master class in tension, action-movie staging, and dark humor.

With Busey coming through the front door pretending to look for his lost dog, two dopey FBI red shirts covering the back door, and Keanu hiding near the side of the house so he doesn't blow his cover, Bigelow slowly turns up the heat by cutting between the action inside the house and the anxiety of the team outside. It's a complicated set piece enlivened by small, funny details like the agents' walkie-talkies becoming useless because of a nearby lawn mower, the perilous presence of a naked woman in the shower, and that funny mirror device Keanu uses to see inside. When one of the surfer goons accidentally blasts off his own foot, you almost forget you're watching a movie where Keanu Reeves brings a surfboard to his office.

12. Tom Sizemore yells in it


13. A plot point hinges on recognizing an ass

Early on in Point Break, Bodhi and pals show their disdain for capitalism after robbing a bank by mooning everyone, including the security camera. If you’re watching the film for the first time, you might think, "Oh, that was a juvenile moment, but surely not an important plot point that will pay off later in the film. That would be preposterous!" You, my hypothetical friend, would be wrong.

Not only is that bare, white ass later called back, but Keanu is reminded of it when he sees one of Bodhi's surfer goons moon another guy while catching some waves. Yeah, that's right: the catalyst that finally wakes Keanu up to the fact that Bodhi might not merely be a peace-loving beach bum is a bare, white ass. It might be the most important ass-related plot twist in the history of cinema. 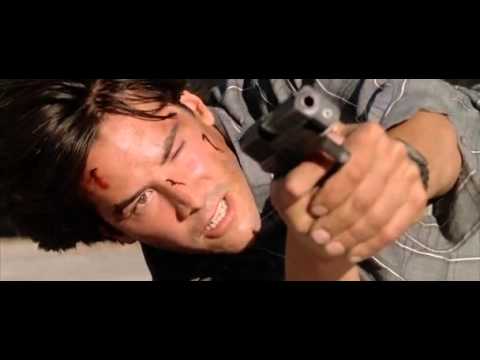 14. It's got that shooting-in-the-air scene

Without question, the best scene in Point Break is when Johnny Utah shoots his gun in the air, cries out in agony, and lets Bodhi get away in his president mask. It's an emotional and absurd moment, combining the movie's sexual subtext with its heart-pounding action sequences. It's iconic.

How do we know this scene is important? It helped inspire the finale of Edgar Wright's Hot Fuzz, probably the funniest (and most loving) action movie parody of the last 25 years. That's how good Point Break is: even the jokes about it are classic.

Dan Jackson is a staff writer at Thrillist Entertainment and, like Gary Busey, he enjoys Calvin and Hobbes. He's on Twitter: @danielvjackson.