This story contains spoilers for Portrait of a Lady on Fire.

Portrait of a Lady on Fire, the French romance film that's developed a cult of fandom ever since it premiered at Cannes last May, is a movie that's all about looking. In Céline Sciamma's 18th Century-set film, painter Marianne (Noémie Merlant) arrives at a coastal estate with a task: Paint the young mistress of the house, Héloïse (Adèle Haenel), without her knowledge. The camera mimics Marianne's viewpoint as she observes Héloïse from the tentative outset of their friendship, through their love affair, and up until the ending that has been leaving viewers shaken, so flush it is with emotion. Portrait has one of the most rattling conclusions in recent years, shatteringly romantic and painfully bittersweet, proof that Sciamma has made one of the greatest love stories of all time.

The movie's last shot is long and fairly simple. Marianne recounts the last time she saw Héloïse, at a concert. They are seated in galleries on opposite sides of the theater from one another, and Héloïse is unaware of Marianne's presence. The orchestra starts to play the Presto movement from the "Summer" section of Vivialdi's "The Four Seasons." And we watch, through Marianne's perspective, as Héloïse experiences joy that melts into tearful regret. The camera hangs on her face for an almost uncomfortably long period of time. Like Marianne, the audience isn't explicitly privy to what Héloïse is thinking, but there's the reassurance that their now long-past time together was as meaningful to her as we assume it is.

Sciamma intense eye for detail, making every single symbol matter in her meticulous masterpiece, mounts to an unforgettable, exquisite ending. Let's walk through the moments that hit the hardest.

The Paintings: Orpheus and #28

There is no puzzle at the heart of Portrait, but Sciamma plants pieces of the ending throughout the narrative. The depiction of how Marianne and Héloïse fell in love is buttressed by a framing device in which Marianne is teaching an art class to a group of young women. One of her students pulls out her painting of Héloïse, her dress quite literally on fire, prompting Marianne to reminisce. In total, Marianne and Héloïse only spend about two weeks in each other's company, and in that period they transform from reluctant companions into friends into lovers. Their time together is just that, and when Marianne leaves Brittany that is the last time they were knowingly in each other's company.

When Sciamma flashes back to Marianne's classroom that could very well be the end of the tale, but it's the beats that remain that are the most devastating. Marianne describes the last two times she encounters Héloïse. The first time it's just Héloïse's image. Marianne is at a gallery, standing watch over a painting of hers she submitted in her father's name so it could be exhibited. The work is an image of Orpheus and Eurydice, depicting the moment just as Orpheus has turned around to gaze at his beloved, who reaches out for him as she is being dragged back to the underworld.

Earlier in the film, Marianne and Héloïse debate the infamous myth with Sophie, the young maid, who wonders why Orpheus looks at Eurydice, aware that it would result in her demise. Marianne speculates that he made a "choice" to live with Eurydice's memory, but Héloïse counters: Perhaps Eurydice told Orpheus to turn around. For Marianne and Héloïse's story, both are essentially true. Both women have agency, but they know that their time together is limited. Sciamma explained in an interview with Vox why she chose this specific allegory.

"Orpheus and Eurydice is a myth that has been looked at by feminists a lot, because it’s basically about how the male gaze can kill you," she said. "This tradition of looking at Orpheus and Eurydice like that and trying to see the point of Eurydice was, for me, a way to play with this myth." She noted in a separate conversation that she doesn't have an opinion as to whose interpretation is the "right" one.

If Marianne's painting is her depiction of herself as the legendary poet deciding to turn around, the following moment finds Héloïse as Eurydice telling her Orpheus to make the move. Almost as if feeling the presence of her lover, Marianne makes her way through the throngs of people and finds herself in front of a portrait of Héloïse. In it, Héloïse looks softer than she did in the one Marianne painted. She's bathed in a warm light and a blonde-haired girl, her daughter presumably, is beside her. But there's a book on her lap open just slightly to page 28.

As they are in bed together, conscious that this is one of the last times they will be able to be in that position, Héloïse asks Marianne for a self-portrait to remember her by. Marianne asks in return for a page number, and the sketches herself, naked, onto page 28 of the book from which they read about Orpheus and Eurydice. By demanding that the figure play a role in this new image of her, Héloïse acts out her version of Eurydice, calling out to Marianne from a world away through a book in a painting. 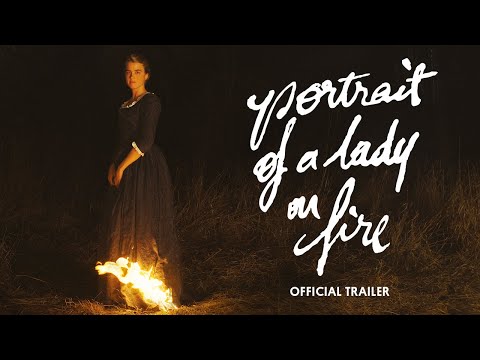 Héloïse is completely unaware of Marianne's physical presence in the concert hall in the last scene, but the sound of the concerti itself conjures the past in an almost spectral fashion. Music is sparingly used in Portrait of a Lady on Fire -- there are only two pieces in the entirety of the film -- but it still plays a crucial role in connecting the heroines. Héloïse, who has been sheltered for most of her life, longs to hear music; Marianne introduces her to the idea that it can be richer than the organ dirges she would hear at church by tapping out a few bars of "Summer" on the harpsichord. The promise of seeing a full orchestra is one of the few things that Héloïse says would entice her to get married. (The only other time we hear music is when Héloïse and Marianne accompany Sophie to a gathering of local women who sing "La Jeune Fille en Feu," a composition written specifically for the film with lyrics by Sciamma and melody by electronic producer Para One.)

That final burst of thrumming strings is at once thrilling and heartbreaking for Héloïse, now experiencing something she longed for, while at the same time reminiscing over something she once experienced. Sciamma told Film Comment she chose the Vivaldi piece because of its familiarity and the nostalgia that brings, but also because it exists in a state of paradox. "Summer" is entirely about a beautiful day interrupted by an incoming storm. The audience is forced to sit in Héloïse's complicated emotions for an almost uncomfortably long period of time.

In the end, it all comes back to the act of looking. Portrait of a Lady on Fire has been celebrated as a remarkable example of the female gaze at work. These women are seen only through each others' eyes and the intensity of their regard for one another is astonishing. When Marianne initially examines Héloïse on their walk, she's probing, on a mission to complete her assigned task. Héloïse, on the other hand, is suspicious of this interloper. Their apprehension of one another eventually softens into mutual tenderness, but Marianne's perspective remains the most dominant -- she's the one who is responsible for translating Héloïse's visage into art, after all. So it's her who we stay with as the Vivaldi swells. Yes, we're staring at Héloïse, but through the prism of Marianne's ardor. It's what makes the end of Portrait vibrate with passion, and the final cut to silence all the more excruciating.