The new anime film Promare, which recently premiered stateside, is perhaps the stupidest, most endearing, and most visually stunning piece of work in the genre you'll ever watch. Eschewing the realism of other recent favorites like Your Name. or Flavors of Youth in favor of expanding the technical boundaries of the craft, the Studio Trigger animators gleefully take advantage of visual possibilities by blending 2D and 3D animation styles that was also used in a similar capacity in Spider-Man: Into the Spiderverse. It's colorful, euphoric, and incredibly expressive; what the film lacks in narrative pacing it makes up for with charisma and visual marvel in spades.

The first feature film from Studio Trigger, which has produced fan-favorite series like the breakneck Kill la Kill or the innocently sweet Little Witch Academia, Promare feels like the studio's logical next step packaged in theater fare. Directed by Hiroyuki Imaishi (Gurren Lagann, Kill la Kill), the film is a completely bonkers animated stunner that bears a number of Trigger and Imaishi hallmarks like a brash, spiky-haired protagonist or even a mech drill that shows up towards the film's endgame. The studio itself has describedPromare as a kind of "spiritual successor" to Imaishi's previous works, with Imaishi himself saying in a statement, "[Studio Trigger] leveraged past experiences into this film, so I can say this is close to the culmination of our works." 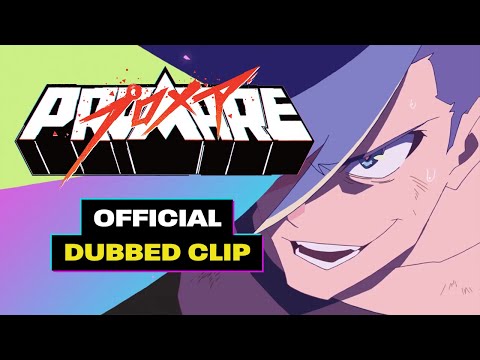 On a surface level, the premise of Promare is simple enough: 30 years ago, a new race of people called "Burnish" began to spontaneously manifest pyrokinetic abilities. Facing persecution and confinement from governments across the world, a terrorist group called "Mad Burnish" began to fight back. The conflict escalated, culminating in an event known as the Great World Blaze, which nearly destroyed the world. In the present, however, things are mostly under control. The Burnish threat is mostly quelled thanks to the work of mech-piloting, ice slinging firefighters who respond to Burnish attacks.

Following a bit of exposition, the film quickly delivers on a high-energy fight between the members of the Burning Rescue unit, who respond to an attack by the Mad Burnish in their home city of Promepolis, which is essentially a vague stand-in for New York City founded and governed by renowned scientist Kray Foresight. Eventually, it boils down to an explosive one-on-one between the film's two eventual protagonists: Galo Thymos, a rookie firefighter with a "burning soul," and Lio Fotia, the delicate-looking, but tough-as-nails leader of Mad Burnish.

This fight is the first time we get to truly see Promare's flames in action. It's clear from the get-go that these aren't your ordinary pyrotechnics: the flames of Promare are multicolored, vibrant, and geometric, composed of blocky triangles and other shapes that take on an amorphous quality when animated. The Burnish can manipulate their fire into solid objects ranging from armor to motorcycles, giving them an otherworldly quality, the backstory of which is eventually (and luckily) addressed later in the film.

Even taking fire out of the picture for a second, Galo and Lio's initial fight is a visual marvel. Every new character introduction comes with block-lettered title cards that are at times a tangible part of the environment, not unlike Kill la Kill's big action setpieces. Aided by Burning Rescue tech whiz Lucia, Galo continuously transforms his mech with new additions like his "Matoi tech," an exoskeleton that grants him additional speed, even as the Mad Burnish gradually tear it to pieces. Even the ice blocks he fires off at the Burnish (which feel relatively static in comparison to their flames) take on bizarre properties and shapes as they meet their targets.

The ever-moving spectacle is heightened by contrasting, nearly-monochromatic moments of stillness. Lio and his subordinates, Gueira and Meis, are carted off to a Burnish prison after Galo captures them and is forced to hand them off to Freeze Force, a militaristic police force whose only task is to capture and imprison rogue Burnish. As the guards toss the trio in a cell, they're greeted with the despondent faces of fellow Burnish captives. Gone is the rich color palette and driving soundtrack -- things here are quiet and devoid of hope.

That balance between a dark stillness and the brightly kinetic carries throughout the rest of the film, with Galo and Lio's storylines running in tandem and occasionally converging. Galo learns more about both the Burnish and his idol Kray Foresight, the governor of Promepolis. Lio, meanwhile, attempts to keep his people free from captivity and exploitation, eventually giving into a burning desire for vengeance. The first half of the film is dedicated predominantly towards humanizing the Burnish, the latter towards exacting their revenge and restoring justice.

Above all, Promare is thrillingly ridiculous and stupid, mostly on the part of Galo, who continues to wax poetic about his "burning firefighter's soul" thorughout the film and complain about his mech's style even at the most inopportune moments. Unfortunately, the focus on both Galo and Lio comes at the expense of nearly every other character, with both the Burning Rescue and Mad Burnish getting precious little development. Narratively, however, it almost feels justified -- telling the story of the Burnish oppression and the government that orchestrates it works best through the focus of two characters who begin on opposing sides of the conflict.

Galo and Lio's relationship also anchors a plot that's mostly a series of increasingly ridiculous revelations stacked on top of each other. You don't really know what's going on until the film's final act, but any narrative quibbles feel minor in light of Promare's sheer technological achievements. Ultimately, the film's plot feels like a vehicle for continuously upping the visual ante. The film's mixing of 2D and 3D animation turn impactful elements like a seemingly endless supply of mechs and the film's iconic fire into centerpieces; its cel-shaded style adds texture and makes the pastel-and-neon colors pop. Although the Burnish flames push the boundary of being too much at times via straight sensory overload, careful cinematography cuts through any confusion in the film's most action-heavy sequences.

Overall, Promare feels like one big animation flex, a testament to Studio Trigger's skill and capacity to create endless, nearly-overwhelming eye candy. Visually indulgent, it's also painfully endearing, eventually providing a kind of resolution to Galo and Lio's relationship. While the film's relentless plot does leave something to be desired, Promare works best if you just sit back and let yourself enjoy the visionary ride.

Palmer Haasch is an entertainment and culture writer. Follow her @haasch_palmer