The 'Queer Eye' Crew Tries to Give Gritty a Makeover 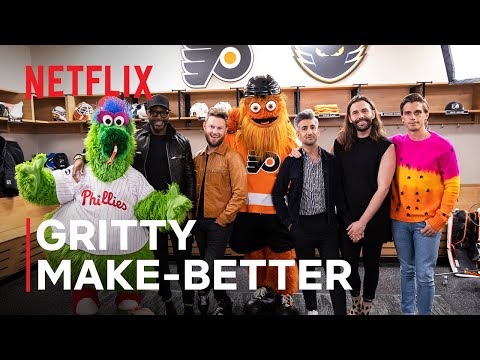 The most recent season of Queer Eye moved the Fab Five to Philadelphia where they helped out a pastor, a woman and her dog-grooming business, and Macy Gray's brother. But it wouldn't be a trip to Philly if they didn't somehow cross paths with Gritty, the Philadelphia Flyers' relatively new mascot, a delightful agent of chaos.

In the short episode (above) that Netflix released on YouTube, Gritty becomes the "hero" after being nominated by his fellow furry guy the Philly Phanatic, the long-time Philadelphia Phillies mascot. Jonathan, Tan, Karamo, Antoni, and Bobby get to work but basically the guys figure out that Gritty is perfect just the way he is. Sure, Antoni tries to get him to eat something other than cheesesteaks, and Tan encourages him to try out a French tuck, but as Gritty watchers are well aware: Gritty is going to be Gritty no matter what you do.

It's all very adorable, and we do learn one key piece of information about our orange pal: He's got a green belly button. Who knew?