Sometimes a new thriller just grabs you with just the basic plot hook. So here's the setup for Rattlesnake, a new Netflix thriller that hit the streaming service on October 25:

A mother (Carmen Ejogo) and her young daughter (Apollonia Pratt) take an unwise detour while driving across the beautiful but brutal Texas desert. A tire blows out, the little girl wanders off, and gets bit by a rattlesnake. Out of nowhere appears a mysterious woman who somehow heals the little girl, but this dark magic comes with a price: The mother, Katrina Ridgeway, must murder someone in the next seven hours or her little girl dies. 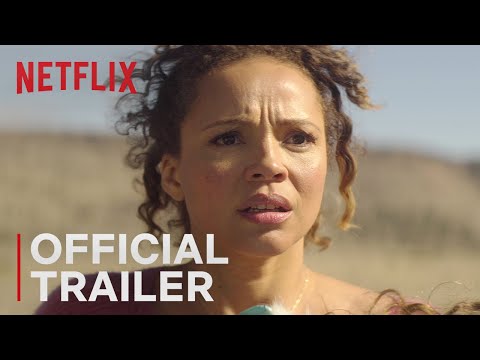 That sums up the first 15 minutes of this smart, sharp, and satisfying neo-noir/suspense thriller/occult chiller, and writer-director Zak Hilditch (of the highly underrated Stephen King adaption 1922, also on Netflix) does a consistently impressive job of keeping the concept cooking while delivering a handful of truly suspenseful set-pieces. The supernatural elements are kept relatively low-key, which allows the excellent Ejogo (best known to horror fans from The Purge: Anarchy and Alien: Covenant) to run through an intense series of creepy exploits that still feel grounded in reality.

It's Ejogo's commanding performance that sells the whole movie. Katrina is clearly a good mother and a kind person, but when forced to choose between her child's life and killing a total stranger, she finds she really has no option but to abandon either her child or her belief in, well, not committing murder. It's Katrina's moral struggle that provides the movie's forward momentum as she starts to figure out a course of action, and it's also what elevates Rattlesnake beyond just another basic horror flick.

Its sly combination of colorful sub-genres also helps push Rattlesnake beyond the level of anonymous Netflix original. Clocking in at a brisk 85 minutes, the movie not only qualifies as a creepy horror story, but also a paranoid suspense thriller as well as an old-fashioned film noir premise. Hilditch and company seem considerably more interested in Katrina's surreal plight and the moral implications of her contract than in presenting just another eerie campfire story. It's also a cool decision to set the whole story firmly within the setting of a bright, hot Texas afternoon, which is both novel and thematically interesting -- not to mention that the film is rather beautifully shot.

Rattlesnake is a cool and compelling little morality tale, one that feels like it'd be right at home in an old EC comic book or a particularly dark episode of The Outer Limits. It offers a clever hook, a fantastic lead performance, and a nifty "all in one day" structure that's a lot of fun when it works. Needless to say, in this movie it works.