Disney's latest animated movie is good, but has a frustrating protagonist problem.

This article contains minor spoilers for Raya and the Last Dragon, which Disney+ subscribers can now watch for $29.99.

One of the benefits (well, the ONLY benefit) of being a film critic during a pandemic is the ability to scroll back through a digital screener to re-watch particular scenes, shots, or dialogue exchanges. There's a scene that made me do that in Raya and the Last Dragon, Disney Animation Studios' new Southeast Asian-inspired adventure movie, which stars Kelly Marie Tran as the defiant, headstrong protagonist, who is cool under pressure, handy with all sorts of weapons, and determined to save her kingdom from a spectral threat. The movie's great, a fantastical mix of Eastern folklore and good old-fashioned Hollywood action, with settings, clothing and food rendered so vividly that they look as if they could be touched. Raya, however, doesn't even feature in my favorite part of the movie.

There aren't any "bad guys" in Raya and the Last Dragon, not in a traditional sense. The villain of the movie, really, turns out to be the mutual distrust between the five kingdoms of Kumandra, a landmass shaped like the body of the dragon; the international strife is personified in the "Druun," purpley-black ghostly blobs that turn the people they touch to stone. The Druun are held in check by a magical dragon crystal, broken into pieces one fateful night in the movie's prologue, when Raya is a young princess of the kingdom of Heart and guardian of the crystal, betrayed by Namaari, conniving daughter of the leader of the militaristic Fang. In the ensuing chaos, each kingdom takes a crystal fragment, and we catch back up with them years later when Raya is a mercenary loner determined to awaken the last dragon in existence and reunite the crystal fragments.

Raya's quest provides the backbone for the action of the movie, and her journey from a distrustful, solitary ruffian to a leader willing to put the fate of the world into someone else's hands is good, but it's Namaari (voiced by Gemma Chan), who has grown up into a statuesque warrior with a short bob and one side of her head completely shaved (yes, there is already plenty of fanfiction), who has the best arc. 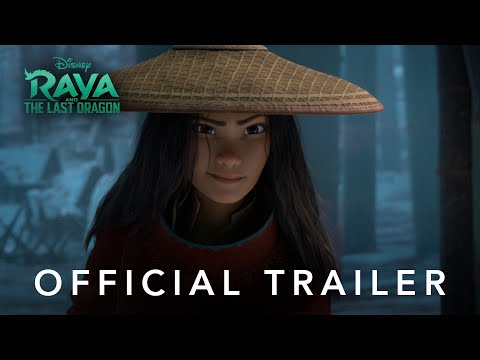 While hunting Raya and her growing band of misfits down, Namaari corners them in an empty city. Raya confronts her, giving her group of new friends (including one very large dragon named Sisu, voiced, delightfully, by Awkwafina) a chance to escape. During the fight, when it looks as if Raya is going to lose, Sisu makes her presence known, distracting Namaari in time for Raya to scramble off. There's a moment, no longer than a few seconds, where Sisu and Namaari make eye contact and you see the shock and wonder on Namaari's face, her eyes welling with the barest hint of tears.

Namaari and Raya first bonded, when they were little, over the fact that they were both fascinated by their land's legends of dragons—Namaari even gifts Raya a silver dragon pendant when they first meet in one of the opening scenes. Later on, we see Namaari and her soldiers ride through a dragon graveyard, where the dragons of Kumandra made their last stand against the Druun and created their protective crystal. Namaari slows her galloping soldiers down and they move at a respectful and somber walking pace amongst the fifty or so stone dragons, their mission for a time forgotten. Though she's more or less the antagonist of the film, she's very clearly not a villain, and she and Raya share more similarities than either of them would let themselves believe. Sisu sees this immediately, and she spends the rest of the movie trying to convince Raya to trust that she and Namaari want the same thing, though they blame each other for what happened to their world.

Perhaps Namaari is so much more affecting here because she, unlike Raya, has so much more room for growth. Raya spends the movie mostly at a very earnest, emotional baseline, tempered, thankfully, by the casual self-confident swagger she has when she fights. Obviously Disney would never make an animated movie for kids in which the protagonist is a total jerk, but they sacrifice giving their main character a fulfilling, layered arc in favor of making her someone audiences have no issue rooting for for the entire movie. If the message of your movie is not to use blame as a way to ignore your own guilt—something that Raya does get across, especially during its swirling maelstrom of a climax—it would serve the story better for your main character to be a little harsher, a little meaner, a little less right all the time. That way, when they do come around, the audience doesn't feel like they've just been waiting for the inevitable.