Everything We Know About 'Rick and Morty' Season 4

Rick and Morty, Adult Swim's totally schwifty flagship animated series, is finally coming back this November after what felt like an endless hiatus (it's only been two years, but whatever). The series, which has gained a cult following since its 2013 debut for its intelligent humor, ridiculous gags, and overall wackiness, is thoroughly integrated in the pop culture zeitgeist by this point -- all you have to do is look to 2017's infamous Szechuan Sauce controversy for proof of its hold over its most intense fans. But Szechuan Sauce incident aside, Rick and Morty reigns as arguably the funniest series adult animation has to offer. Created by Dan Harmon and Justin Roiland, the series chronicles the interstellar misadventures of Morty, an anxious teen, and his scientifically inclined and perpetually drunk grandpa, Rick.

With the new season just months away from its return to Adult Swim, we've compiled all of the details, plot points, and casting information that we've gotten ahold of so far. Here's everything we know about Rick and Morty Season 4.

When will Season 4 of Rick and Morty premiere?

Rick and Morty will premiere November 10 at 11:30 EST on Adult Swim, the return announcement coming by surprise via Twitter right after midnight on October 7, along with a trailer for the new season. The network announced the series' return last May via a short video presented by Rick and Morty themselves. What makes this comeback different, however, is the promise of many, many episodes to come.

Co-creator and voice of both eponymous characters Justin Roiland tweeted in May 2018 that Adult Swim had not only picked up Rick and Morty for a fourth season, but ordered 70 episodes of the series in total. Roiland told Polygon in 2018 that the large order gives the team a bit more security, in turn allowing them to turn around episodes -- and seasons -- at a quicker rate. That should mean that the series' infamously long gaps between short seasons should decrease.

"We're super excited that, for the first time ever, we're locked in, we know what the future is, we have job security," Roiland told Polygon. "[Dan] Harmon is in great spirits, we have a great writer's room. We want the episodes to stay good, but we do also want to try to turn them around a little quicker now that we have this big order, I think it gives us the ability to be faster. We're not going to do these long breaks, these chasms in between seasons anymore. We're going to schedule vacation time and just keep the machine going. It's going to be really cool."

How many episodes will there be in the new season?

Like previous seasons of Rick and Morty, Season 4 will have 10 episodes. There was some doubt as to whether or not the series would retain its brevity given the extensive episode order, but Roiland confirmed to Entertainment Weekly that the 10-episode format wasn't changing this season.

What will Season 4 of Rick and Morty be about?

The same thing as every other season of Rick and Morty: adventures that manage to drag in all of Rick and Morty's family, space travel, and drunken escapades that dig deep into existential angst. Season 3 ended with a relatively neat conclusion -- with the Sanchez family back in working order, Jerry (Chris Parnell) included -- that leaves Season 4 completely open to new possibilities from the get-go.

That being said, Harmon and Roiland told Entertainment Weekly that this season will feature more serialized plotlines "sprinkled over the top of strong episodic episodes." That means that fans should be up-to-date on the series before tuning in for new episodes. Per comments made by Harmon at San Diego Comic-Con 2019, the new season will also mess with time travel, something that the creators haven't really worked with since the series' pilot.

There have been a few sneak peeks at the new season thus far, the most notable being a clip released during San Diego Comic-Con that sees Thor: Ragnarok director Taika Waititi voicing a squat little alien named Glootie, who is also an app developer in addition to being a total pain. Classic purple alien stuff. 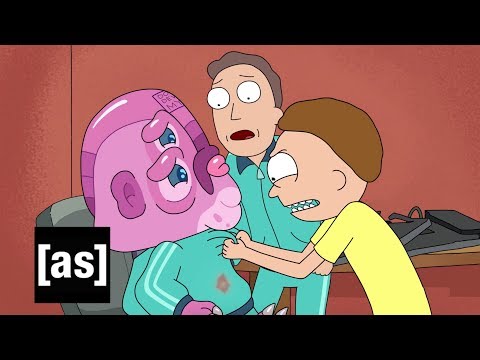 Past that, we've gotten a variety of breadcrumbs about characters and plotlines upcoming in Season 4. Adult Swim recently released a few promo images: there's one that features Rick serenely walking through what looks like an alien field of wheat, and another decidedly less peaceful one that has him squaring off against a group of reptilian cyborgs.

Justin Roiland also teased a potential "Interdimensional Cable 3" episode on Instagram, captioning a photo taken from within the recording studio with, "Idc 3 (maybe)." There have been two Interdimensional Cable episodes in Rick and Morty thus far, both airing as episode 8 of Seasons 1 and 2, respectively, which have been weirdo fan-favorites. While Season 3 didn't have an official IDC episode -- but it did have the IDC-adjacent "Morty's Mind Blowers" as its episode 8 -- it looks like the format could be revived in Season 4.

Finally, the last hint that we've been given is a comment from Harmon that "there's going to be a couple Meeseeks popping up here and there." Who knows what those blue guys will be getting into this time around, but hopefully it has nothing to do with Jerry's golf swing.

Who will return for Season 4?

All of the series regulars are back: Justin Roiland will return once again to voice both Rick and Morty, along with Spencer Grammer voicing Summer, Sarah Chalke as Beth, and Chris Parnell as Jerry.

Like past seasons, the voice cameo slate for Season 4 is rich. So far, we know that it features special appearances from Taika Waititi, who we've already seen as Glootie, but we've also been promised Sam Niell as an alien like Glootie, Paul Giamatti, Matthew Broderick, Liam Cunningham (who you'd recognize as Ser Davos Seaworth from Game of Thrones), and Kathleen Turner as visitors to Earth Dimension C-137 in some form.