It's the first ever TV comedy with a Native American showrunner.

Over the past decade, television creator Mike Schur has become known for his warm, wholesome shows that—while not conflict-free or lacking in depth—offer a certain level of comfort viewing. Parks and Recreation offered a picture of a fantasy small town in the middle of Indiana where a group of ragtag municipal employees supported one another no matter the circumstances. The Good Place followed a group of dirtbags trying to escape the clutches of literal demons and learning about morality along the way. Brooklyn Nine-Nine is a (now controversially) lovable cop show, where the detectives care about one another's happiness. While Schur's shows have always been admirably diverse, they only occasionally tackle race. The latest show Schur co-created introduces another adorable town filled with quirky characters, but in this case the diversity of the cast is not an afterthought: It's the entire point.

Peacock's Rutherford Falls—which Schur developed alongside star Ed Helms and Sierra Teller Ornelas, now the first Native American to be the showrunner on a television comedy—takes place in, well, Rutherford Falls, a spot in the Northeast where settler Lawrence Rutherford "brokered a uniquely fair and honest deal" with the fictional Minishonka tribe that was already there. Nearly 400 years later, Helms' Nathan Rutherford is the only Rutherford still living there, and he's aggressively proud of that fact, running the local museum. His best friend since childhood Reagan Wells (Jana Schmieding) is also back home and dedicated to preserving history, but doing so with a lot fewer resources. Her Minishonka cultural center is just a small room in a casino, where drunk patrons wander in and want to claim her artifacts on display as prizes for their winnings. The casino is overseen by the imperious Terry Thomas (Michael Greyeyes). He sees its success as proof of how his community is thriving and has little time for Reagan's interests. (Also, most of the Minishonka hate Reagan for skipping out on her wedding to a longtime boyfriend.) 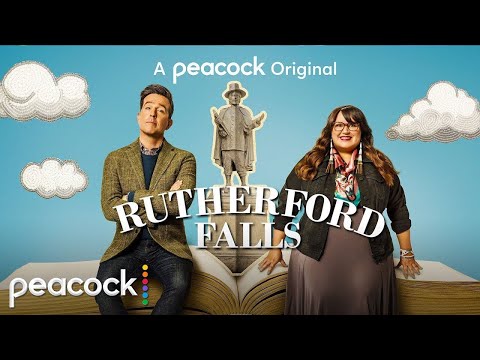 In the pilot, the mayor Deirdre Chisenhall (Dana L. Wilson) wants to remove a statue of Lawrence Rutherford that has been the source of car accidents, and the opposition eventually causes Nathan to lose his mind a little at a Founder's Day celebration, telling the gathered crowd that his ancestor is the only reason any of them exist.

This brings me to the central hurdle of Rutherford Falls: Are we supposed to side at all with Nathan Rutherford? He's a classic Ed Helms man-child type: Overly enthusiastic in a way that borders on purposefully annoying, and in this case, his main goal in life is to uphold the legacy of his white forebearers in a place where the indigenous population is just as, if not more, prominent. Within the first four episodes—those that were made available to critics—Nathan repeatedly finds out that his words can easily be twisted to sound, frankly, racist. Often, it's hard to imagine how Reagan has stayed friends with him for so long without fully telling him off. But Nathan exists in a weird middle ground of sitcom characters. He's not quite a Michael Scott-type, who wears down your defenses through his total idiocy and braggadocio. His cluelessness feels almost more insidious when you consider the circumstances.

When Rutherford Falls ditches Nathan and just focuses on Reagan, it falls into the more easily pleasurable rhythms of a typical Schur enterprise. Schmieding is wonderful as the awkward Reagan, struggling to find a place for herself, neither fully understood by Nathan nor Terry. As Terry, Michael Greyeyes starts off as something of an antagonist, but by the fourth episode is fully integrated into the narrative with his own storyline that's as equally, if not more, compelling than Nathan's. Eventually, Schitt's Creek star Dustin Milligan comes to town as cute but a prying NPR journalist.

Rutherford Falls is groundbreaking, without question. It's the rare television series that is created in part by a Native American writer—Ornelas, who is Navajo—where indigenous people are not ancillary but central to the narrative. It just has to figure out what to do with the white man at its center.