The 'Who Is America?' comedian showed up at a rally in Olympia, Washington to perform a new song.

After insisting that there would not be a second season of his headline-generating Showtime prank series Who Is America? because "it would be impossible," it looks like Sacha Baron Cohen is back to his old tricks. The Borat star, who has made a long career out of making powerful figures incredibly uncomfortable and whipping unsuspecting crowds into a frenzy, stopped by the “March for Our Rights 3” rally in Olympia, Washington on Saturday, where he treated the event's attendees to his new song, which included lines about injecting Dr. Fauci with "the Wuhan flu" and chopping up mask-wearers "like the Saudis do."

Judging from the videos available online, the performance went over how you'd expect, with many of the event attendees cheering along to the song's intentionally provocative lyrics and responding to the comedian's call-and-response commands. Dressed in overalls, a hat, and a fake beard, Cohen appeared to be playing a new character, a type of right-wing political bluegrass singer. This could be a one-off prank or part of a new project from the notoriously secretive writer and actor. You can check out the clip yourself, below. 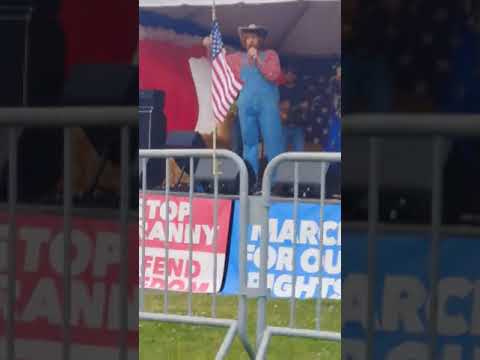 Not everyone found it amusing. As the Daily Beastnotes in its write-up of the incident, the meet-up was hosted by the Washington Three Percenters, a far-right group that was quick to denounce Cohen's performance on their Facebook page. The organization claims that Cohen got "on stage, sang racist lyrics and made multiple hateful remarks then escaped in a private ambulance when security and attendee’s [sic] attempted to stop their hateful rhetoric."

In an interview with NPR, Matt Marshall, the the founder and former leader of the group, detailed how exactly Cohen ended up on the stage. Apparently, a California-based group called Back To Work USA, which claimed to be looking to support conservative voices in largely Democrat states, contacted the organizers and offered significant financial support for the rally "in the $50,000 range" and provided its own private security. "I mean, they played the game," Marshall told NPR. "We talked to them about how frustrating it was to be labeled racist, and they agreed with us. Like, we really let the guard down and trusted them."

The NPR piece provides a thorough breakdown of how exactly Cohen's team operates. Unsurprisingly, the results tend to piss people off. Yelm City Councilman James Blair, who was at the event and wrote about the fallout on Facebook, described Cohen's performance as "a bullshit stunt."

For fans of Cohen's brand of confrontational comedy, this new stunt has clear echoes of the "Throw the Jew Down the Well" performance he did in character as his most famous character Borat as part of Da Ali G Show back in 2004. In 2006's gotcha-comedy blockbuster Borat, he performed the national anthem at a rodeo as Borat to an increasingly hostile crowd of onlookers. No matter the venue, the guy is pretty much always willing to go for it.

With Cohen's ever-growing fame and the rise of social media, which can make any public conflict or politically charged interaction go viral, pulling off these performances has grown more complicated, and for a period it looked like Cohen was done putting himself in these often tense scenarios. Is he working on a new movie, a new show, or is this a one-off experiment? Maybe he simply got tired of looking at the news on his phone during quarantine and decided to start some trouble.