Samurai Jack and Ashi Are Now an Unstoppable Ass-Kicking Team

He finally said it: "It's time to find my sword."

What a bonkers episode of Samurai Jack. Ashi's hunt for the samurai after last week's near-tragedy led her to some of this season's most nostalgic callbacks to the show's past (not to mention some fun intercutting with Scaramouche, who met with some of Jack's old pals, too). "XCVIII" ended with an action-packed finale that finally answered the season's big green samurai question -- here's what it all means for the final four episodes left in the show.

Tonight we saw the returns of classic Samurai Jack allies as Ashi embarked on her quest to find Jack. The Woolies -- whom Jack saved from subjugation -- mistook Ashi for a servant of Aku and nearly tried to take her out. The Three Blind Archers -- who fans will remember from their classic episode-long fight scene of the same name -- came back galvanized as warriors with a temple and mountain community resisting Aku. Ashi even encountered Da Samurai (aka Sam-Moo-Rhai), Demongo the Soul Collector, as well as Olivia from the classic episode "Jack and the Rave."

The rave hammered home the mystique Jack holds among the people Aku has stuck under his thumb. They formed "S" symbols with their hands and danced the night away in his honor. The archers literally erected a giant statue in his likeness. If we have one prediction, these characters will all be back and they'll be fighting alongside Jack, Ashi, the Scotsmen, and his Daughters in the coming weeks.

As the Archers put it, "A friend of Samurai Jack is a friend of ours."

Along the way, Ashi got a verdant wardrobe update in a racy scene that probably couldn't have been done when the show first introduced us to these characters in the early aughts. (Reddit went bananas.) Her transformation hasn't always been smooth, but the flashback to her past as a child soldier helped earn the scene where she took a break to swim and make new, earthier clothing out of the foliage around her. The promo for next week reveals that she'll continue to get her hands dirty with the ass-kicking we've come to love, no matter what Jack says about how he has to go it alone.

More importantly, though, Ashi's dialogue with Jack at the end of the episode showed how far her character has come since meeting him. He was on the brink of suicide, wracked by cosmic forces of death telling him he had no choice but shove a sword into his stomach. Ashi saved Jack's life before he defended her from the Green Samurai's killing blow. You can bet Ashi will save him at least one more time before it's all over.

Even with its several relentless callbacks and Easter eggs for previous seasons though, the episode's final showdown with the Green Samurai was by far its coolest sequence. Contrary to what we predicted last week (but exactly what we said it was when the season premiered), the Green Samurai, officially named "The Omen" in the credits, was revealed to in fact be an avatar of death. If a touch more hackneyed as a reveal, the show pulled it off with a spectacular fight sequence. Ashi showed off her chops fended off his brutal attacks even as he taunted Jack to commit seppuku (or hara-kiri) to atone for his failure to defeat Aku.

Jack's folk hero status saved him here again. He was all but ready to kill himself until Ashi reminded him how much he'd done to help people and told him that the brainwashed children he fought were in fact still alive. Now the samurai's mission is clear and in the next episode, he's set to get his sword back with Ashi's help.

These are all firsts for an episode of Samurai Jack: Someone had a nude scene. Several characters were implied/"revealed" to "been naked the whole time" per some Twitter users' interpretations. Someone said "son of a bitch." Someone else said "hell." Someone made a visual and vocalized penis joke, courtesy of Tom Kenny as Scaramouche. (The same guy voiced Spongebob Squarepants, by the way.) It was awesome, especially given that all this adult humor also came in the most callback-heavy episode of the show yet.

Let's count all of the hidden references to classic Samurai Jack

This episode had quite a few, and they're all worth revisiting, since they came from both old episodes as well as riffs on other heroic tales from pop culture and history:

The Three (Formerly Blind) Archers -- These are the archers Ashi ran into. They were blinded and imprisoned as the guardians of a time portal, and Jack had to defeat them in a mostly dialogue-free, much-beloved early episode "Jack and the Three Blind Archers." At the end of that episode, they regained their sight.

Olivia and the Ravers -- She's the DJ at the rave Ashi discovers, and Jack saved her as a small child from a mind-controlling DJ in the episode "Jack and the Rave." Ashi's dance in this episode also echoed Jack's dance from the original episode.

Da Samurai -- He was an aspiring, and funkier, samurai that Jack met in his travels, when he completely embarrassed Da Samurai in "Samurai versus Samurai." Keegan-Michael Key voiced him in this episode.

Hexbucket Seaport -- As pointed out by the podcasters at "Samurai Jack Cast," the seaport Scaramouche uses to get on his boat toward Aku is Hexbucket Seaport and made an appearance in the Scotsman's last episode in the original four seasons "The Scotsman Saves Jack."

Batman -- Also pointed out by the folks at "Samurai Jack Cast," the music cues when Ashi looks up at the Archers and they lead her to their mountain home is very reminiscent of both Hans Zimmer's score to in The Dark Knight as well as Danny Elfman's theme from Batman: The Animated Series.

Big Dog from 2 Stupid Dogs, Spike from Tom & Jerry, Astro from The Jetsons -- All these dogs make a silly cameo as the dogs Scaramouche meets. They never did in the first four seasons of Samurai Jack, to my knowledge, but are all Hanna-Barbera or Cartoon Network properties.

Popeye the Sailor Man -- He makes a blink-and-you-miss-it cameo as one robots Ashi encounters in Da Samurai's bar.

The Graveyard -- Jack was led to the same graveyard in the episode "Jack and the Zombies," but none of the ghosts or zombies from that episode made an appearance here.

Honda Tadakatsu -- As we pointed out last week, The Omen looks a lot like this samurai from feudal Japan, down to the antlered headgear.

Ashi's search for Jack came to an end when she was told to "Follow the path north" by a mysterious short woman. It's still unclear who this was, and when Ashi turned back around she was gone. She seems to be an ally to Jack and Ashi, since her interference directly led to Ashi saving Jack from his demise, but we can bet she'll be back too.

According to this promo from Adult Swim, next week's episode, "XCVIII," will feature Ashi and Jack on the hunt to get his sword back. It won't be easy, but that chapter should finally wrap up next week. 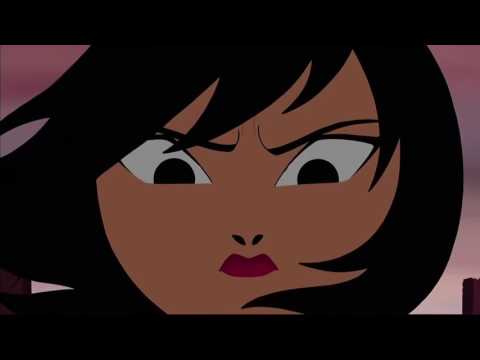